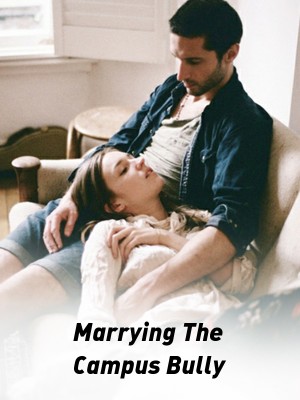 Being simple despite of being the granddaughter of the most wealthy man in the Philippines is what Luna Rockswell wants to be. She just want to study, finish her course in business and build her own company just like her lolo. Getting herself into a relationship is what she's keeping herself from. No heartaches, no dramas, no boys until she graduates. But, what she did not want do, turns out to be what she has to do. Waking up the next morning realizes she's already married to a badboy and bully Casper Luettgen. Will their relationship as a married couple gonna work out despite being the worst enemy? Will love and Intimacy bloom between them or is it just only one them will fall into cupid's trap?

I went to school early, hoping that this time our path won't cross. Even just for this time, please I've had enough of his games. I didn't know why, Casper Luettgen loves to bully me. I know him since 7th grade because we went at the same school, ever since he's really a bully. He plays with people's feelings, he loves hurting them for fun, it's like it's the most satisfying things he's ever done.

I'm a freshmen and his sophomore. I study business in this prestigious school which his family owns. Unluckily, I'm one of his victims now. Since I transferred here, I never had a Peaceful life, ofcourse it's because of him. I always ended up wearing my Gym uniform because of his pranks making me shower with paints or worst the dirty water from mapping the floor.

He's the worst person I've ever met. I hate him so much. I swear to god, if murder isn't a crime, he's already buried.

I didn't waste time and ran to our classroom before I could hear the ladies screams cause that's the sign that he and his friends are already here. Aside from being an evil bully he's also the hottest hearthrob in the campus.

Some girls here even want them to be bullied by that evil. Aren't they crazy? He's also a playboy obviously. You can see him making out anywhere here inside or even outside the school. He didn't care, why would he be, right? He owns this school and he's an evil. So it won't be questionable anymore

So I'm already here at our classroom. I went to my seat and put the things I might need during the class in my table. It's a good thing I came early so I can still relax before our classes begins. Unlike from the previous days, when everytime I was just about to enter the campus gate an evil bully comes to welcome me. I don't know if I should be touched or just curse him to his death.

"Kyaaaaaahhhhh" my heart started to pound when the girls started screaming, screaming their names.. They praise them as if they were angels sent from heaven, I think they're just blinded because they're attractive, fine, I won't deny that part. They actually hmmm.. good-looking.

But you know what's the real thing behind that angelic faces? Especially that Casper? They're actually demon in disguise.

I just ignore them, I read my book and brought myself into the other dimension. where there is Peacefulness and silence.

I'm just busy reading the first page, when someone kicked my chair which cause me to dropped my book. I didn't move because I know that it was him. And he's behind me.

I then felt him lean towards me that I could feel his warm breath.

He smelled my neck that gives me chills

"I just heard a news this morning" he said seriously. News? What kind of prank he wants to do this time?

"I don't care and I'm not interested" I said.

"Are you sure you don't wanna hear it babe?" He said in a husky voice. Damn it I won't deny it that was sexy specially the part when he called me babe.

Wait, Babe?? Did he just call me babe? My brows furrowed. Is he planning to make me one of his toys?

I looked at him the moment I realized it but it was a wrong move because when I turned my head to see him he's too close that our lips accidentally met.

My eyes widened. It was 5 seconds before I was taken back to reality and pushed him away from me. I stood up and wipe my lips. F*ck, that was my first kiss and i can't believe I accidentally gaved it to someone I loath so much.

"I so hate you" I said to him with my shaky voice. He just grinned. Walked closer to me and whispered to my ears.

"That was just an accidental kiss Wife, tommorow will be the real one."

He smirked and just vanished out of my sight.

Is he really going to add me as one of his collections?

I went back to my seat with my knees trembling I can't even think straight. We just kissed, and he told me tomorrow will be the real one. What does he mean by that?

Should I just transfer school tomorrow? Maybe I really should.

It's lunch and I'm at the cafeteria. As usual I'm alone. I don't have friends and that's my choice. I'm just here at the corner, eating my sandwich while reading a book. At my peripheral view I saw Casper and his friends enter the caf they went straightly to the table which exclusively made for them. It's actually different because they use couch and a glass table like wtf, are you guys at a hotel? But who cares? Like what I have said, Casper owns this school and he can do anything what he wishes for.

I ignored them and tried to focus myself from reading. But I felt someone was looking at me so I looked up and saw Him looking at me--

Looking at me while he's torridly kissing a girl.

I felt something inside my chest that I couldn't explain. I just ignore it and didn't give much attention. I met his gazed and just rolled my eyes to him. Whatever you're planning to you're not gonna win this time.

Honestly it was a different kind of a day. I don't know why, after what happened this morning, Casper Didn't pulled any prank at me at all. I really had a quiet day. It was mind blowing and I am actually starting to think that maybe Casper is going to die soon that's why he's doing good deeds now.

If he die then it will be the happiest day of my life. I can't help but to smile because of what I'm thinking. I may sounds evil but if you're on my shoes you'll wish for the same thing, I Swear.

It's been a couple of minutes and my driver isn't still here. I really wanna go home so I could tell my dad that i will be transferring school tomorrow. It's the first time my driver has gone late. And I'm wondering why.

Later on, a black LAMBORGHINI stopped infront of me. I Took a step back because I know who owns this car.

"your dad told me to drive you home"

I paused and turned my head to see him.

"You can no longer fool me idiot, so if you're on your next evil plan, I'm sorry but I rather walk than be with you alone inside that car, understood?" I continued myself to walk away from him.

I didn't heard him answered or say anything, he just started the engine. I was about to cross the road when he Drove the car closely to where I am, due to shockness I fell on the floor.

I felt my heart raced, he went out the car and approached me. "Why are you so stupid?" He asked me. "Do you wanna die?" He added.

I glared at him. "No, but I want you to die. You did it on purpose. You drove the car to where I am on purpose. You really wanna kill me huh. What did I even do to you? Why are you doing this to me" i felt my tears rolling down my cheecks. I can't handle it anymore. He's too much.

"I wasn't tricking you. Your dad really wants me to drive you home." He said, seriousness is written in his face.

I Looked away, "prove me" he sighed and dialed something on his phone. "She wants to talk to you" Casper said then gaved me his phone. "Dad?" Me

"Luna honey, I sent Casper to bring you home. Come with him. We're waiting for the two of you here." I glared at him. "Okay daddy"

I gave his phone back. "So will you not help me stand Up?" I asked him With my neutral facial reaction. He made face and grab my arm.

We we're on our way to my house.

When we got thier I was surprised to see my mom and dad together with Casper's parents.

"Finally you too are here. C'mon sit" Mommy said. I sat beside Casper. Because that's the only available seat left.

"So may I know what's going on here?" I confusedly asked "mom, dad?" I look at them.

I flinch many times. Arrange-- what??

I look at Casper, "did you hear that? We're getting married? With each other? You, me? Are you okay with that?" I was panicking. I'm getting married like what the heck is going on with my parents mind?

"I'm sorry Luna but we already processed everything." Dad said. I look at his parents they just smiled at me.

I looked at him again

He's smirking. "What's the problem Mrs. Luettgen? Didn't you just kissed me this morning" he said with a teasing smile.

Oh god, if I'm dreaming please, could you please wake me up. I can't be. I can't be Mrs. Luettgen.