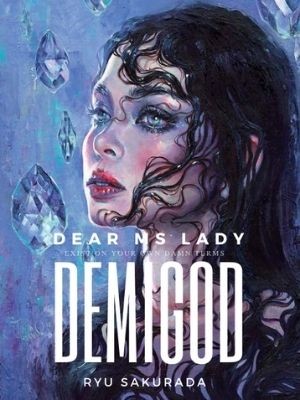 Vierne Obolensky is the last heir of the Obolensky family, the family of Earls in Moscow, Russia. At a tender age, she witnessed 2 horrible things, first, after a short illness, her life was barely saved but sadly she lost her sense of feel. She got some special powers in return, but she considered them as a curse because with these powers running out of control, she took her own parents life. She could not touch anything or else it would break. After ten years of solitude, she meets Music in its human form to discover her purpose and become the strongest gatekeeper guarding the gates to heaven and hell.

It is a human instinct to feel afraid whenever one is too happy. Those who are ignorant to such a mystic reality shall perish. After all, dawn falls on those who have suffered the darkness of dusk.

Behind a silver moon, is the sky. But it's dark so people don't usually look at it. One has to do one thousand good deeds to be a good person but one bad deed to become evil and corrupted. How fragile the morals of this impudent world are—This world, what a disgusting affair to ignite.

I am Vierne Obolensky, the last surviving member of the Obolensky family after the Black blood tragedy. My father was an Earl—Rich enough to build an empire here in Russia. My memory has grown hazy but not my vows. It was a fire that burned down everything, and I rose up from the ashes of the dead.

What can the dead possibly give birth to? Another dead one I suppose. It had been a decade since my death to the world—The world who forgot my name. And now here I thrive, in the darkness of this abandoned mansion somewhere in the woods. Nobody knows that this place exists and they will never.

Every visitor had seen the same face as the last one. I've read books, books that talk about me and those that don't. Far away in the heart of Russia, among the fierce woods of Moscow, lies an abandoned mansion with a deadly curse. All that she touches will lose its breath, you witness a beauty followed by death.

Time has followed me to the path I've come. For the seventeen years I've existed, I've only brought misery and death with sprinkles of bliss to fool those who thrive for it.

It made people wonder; how could something so beautiful be so deadly?

When I was seven, I suffered from an acute illness and lost my sensitivity to touch. I cannot feel anything from my hands anymore. However, that's not where it left me. Anything I touch with my right hand will break into thousands of pieces—as small as a grain of sand—be it an object, a plant or a human, anything living or nonliving.

Surprisingly, my left hand is worse. Anyone, who I touch with my left-hand beaks from the inside. My left hand can shatter emotions and precious memories, which is why my mother covered it with a black glove. It has been there ever since.

Nothing in this world can kill me. I can safely say I'm not mortal anymore. But then, what am I? I've asked the same questions to these four walls. But with every question comes that unexplainable silence and emptiness.

My body no longer performs any metabolic activities. I do not breathe, nor do I ever find the need to eat. Even my heart has stopped beating. It's as if I'm a living corpse. I have lost the ability to live as well as the ability to die. I'm stuck. Somebody please—Help me.

How pitiful have I become? Mom would be sad if she saw me now. But unfortunately, we don't get to choose what we feel. It was time to go out. I needed some new books since I had read everything I brought in the previous month.

So, I decided to pick up my black umbrella and walk out into the sun. I purchased books from the money my parents had left me. Because at that point, I was addicted to reading like an alcoholic is addicted to drinking. After all, I was living in the era of the great novelist, Akagi Scheczalier—A Russian parody whose name was familiar to every street of mother Russia.

His writings were powerful and yet elegant. What an array of sophistication that he possessed, the entire European and Asian continent was under the direct influence of this young man—From royalty to the peasantry.

I was busy having this literary conversion in my head while walking on that busy street and suddenly I bumped into someone. They must've been extremely hard-headed because they nearly winded me.

I groaned as I touched my stomach. What the hell was this guy thinking? I looked down at a boy in front of me. He looked like a primary school kid. He was too poorly dressed to have come from an influential family.

'Ugh, stupid curly hair!' was the first thing that came to my mind when I looked down at him.

If there was anything I hated most in the world, it was sticky things like honey, slouchy bugs and some special type of guys. You know, the guys who are blonde or have curly hair or supernovae that attract attention like in those romance novels.

This bastard happened to be all three of them, so I developed instant hate for him, even though he looked like a mere five-year-old—A fetus.

The boy looked up at me with his dull brown eyes, giving an almost pleading look. He was frail, pale and sported tattered clothes. His eyes looked dull and while looking at him, I felt an uneasiness within me.

For the first time in ten years, I almost felt as if my heart was about to beat. Was I alive after all?

He slowly moved his tiny hands towards me, reaching upwards. I waited to see what he was up to. Ladies and gentlemen, this brat's hands ended up on my very feminine chest and the nonsense he spouted was; "Oh! I can touch it!"

That's when I lost my very ladylike cool and did the only one thing which was obvious. I pushed that brat away and shouted at the top of my lungs, "What are you doing? I didn't know perverts started this young!"

Okay, that was unladylike.

I can't believe I lost my cool and composure to such a brat! To my defence, he was rude and invaded my personal space. I mean who gropes you on the very first meeting, and when he's expected to apologize?

That's when he sprouted utter nonsense: "Oh! You can see me?" Had his mother not taught him manners? "Shoo!" I sucked my teeth and waved for him to go away, then turned around and walked away.

As I turned and started moving, I was pulled back by my shirt and that boy asked me to wait. He reached about to touch my right hand so I pulled myself back and shouted at him to stay away, but he was reluctant so I did what was the best at that time, "Stay away from me you little snot, if you touch me, your poverty may spread. You perverted pauper!"

I didn't regret my words because maybe this would keep him away from me. Coldness and hurt are better than death. I turned my face, and began walking back home when he called out to me saying, "Okay miss, I won't touch you, so please give me a moment of yours!"

"Not more than a minute," I responded begrudgingly.

"A minute will be fine, I just need to ask you a few questions, first-" He looked really serious so I was curious what he would ask, he finally opened his mouth and said, "Are you sure you're a girl, tell me honestly, I promise I won't tell a soul."

"I am a woman, at least biologically. If it's a joke, it's pretty distasteful if you ask me."

"How would I know—I haven't tasted you."

How shameful! I was seriously annoyed and just wanted to slap him right and left on the face.

"A request, what is it? And why do you think I'd agree, pipsqueak?" I shot him a glare.

"Well, first off, I'm adorable. But my request is if you'd like to form a contract with me?"

What was this brat even saying? What kind of fucking contract? I knew nothing about it, so I answered "Sure, whatever."

A big bright smile lit up his face and he replied "Really? I was afraid you might reject my offer. Well, then let—" I cut him off and walked past him to the nearest police station.

"Officer, I think that kid is lost and maybe he is doped." As a concerned and good citizen of my beautiful country, Russia, I reported him to a nearby police station.

The police officer asked me where he was, so we walked outside and I pointed to the little boy who had followed me here, but the conversation between us didn't end well.

"Where, there is no one over there." The officer said, taking off his glasses only to squint. I swear people are getting dumber by the second.

"Over there, near that red car."

"There's just that red car, no one is near it."

"Are you blind? Put back on your glasses you dodo."

"There's really no one there. Have you taken your medication today?"

"What are you trying to say? Can't you see that blondie with the curly hair?"

"Calm down. Do you want some water? What did you eat for breakfast?"

"And now you're eating my head,"

"No one can see me but you so goes for touching or hearing" That brat told me.

"I'm a star, one of the shooting stars that fall in the sky, you made a wish, so here I am,"