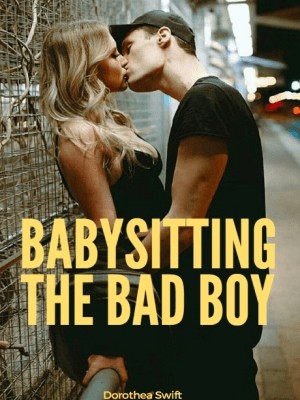 “No matter how the mind forgets, the heart never fails to recognize the one you always loved” Have you ever tried babysitting a boy? Especially a bad boy? Well, Olivia Arnolds will experience it. Olivia Arnolds is a kind young lady, who suffers from a different kind of amnesia. Even so, she always looks at the bright side. Not until she meets, Marcus Anderson, a bad boy and always causes trouble, as everyone says “He troubles himself”. She tries to stay with Marcus under one roof for 3 months as his parents trusted her to do so. Not in her life has she ever faced something this hard, but even if she tells herself not to get involved with him, she still does. Until they both confessed and fell in love, breaks-up and meet again. Obstacles will never be absent when it comes to relationship but will they ever find their happy ending? What if after years of not seeing each other, she doesn’t remember him? Can he be able to win her back? Or will he let her slip away again? And what if enemies lurking try and separate them, will they still be able to have their happy ending?

“Mom! I’m going now, I’ll leave Mrs. Montana here with you, alright?” I shout as I pull my luggage out of the house.

But she didn’t answer. I sighed.

“Mrs. Montana, thank you for agreeing to look after my mom”

“Don’t worry about her. Don’t thank me, it’s my job alright? Off you go now, don’t want to be late” she tells me and I hug her

“Really, thank you” I whisper and she nods

After that, I ride a bus and not long after I reach the Anderson’s house.

I knock on their door. As soon as it opens, a smile on Mrs. Anderson’s face was clear, so I smiled back.

“Olivia, you’re a life saver” She says hugging me and I chuckled

“We are. Actually, you’re right on time. We are about to leave, so you handle everything here alright? Your room is upstairs, one on the left. Same room as always” She says and I nod

“My son is not here yet. Can’t wait for you to meet him. He’ll be here later and same rules”

My eyes widen “You have a son? Really? That’s great, is he in pre-school or tutor today?” I ask smiling

Mr. Anderson chuckled “I had given him an ultimatum. That’s why you haven’t seen him in years. He is the same age as you. He always find trouble, so we need a favor and set him straight.” He says as they fix there stuff

“Wait, what? Uhm, I don’t how to baby sit someone my age” I say in disbelief

“You can do it sweetheart” Mrs. Anderson smiles at me then shouts “Honey let’s go!”

“Okay, we’ll get going, see you in 3 months and then take care of the house and our son. Thank you Olivia” She says kissing my cheek and leaves the house

“Goodbye dear, I know she told you call us if you need anything but please unless its an emergency, understand me right?” he winks

I nod because I do. It’s their wedding anniversary. A 3 decade of marriage. They both needed it, I know because I have been with them for 3 years now.

But still I was not informed they had a son. They never mentioned it to me.

“Yes, but---” I say but he cuts me off “Gotta go!” then leaves me there alone. Well, not technically alone, there is always Mrs. Abigail with me, but still!

I lock their door and went to find her. She was cooking.

“Hey dear, can you help me open the can, you know I’m too old and not strong enough to open it anymore” She says and I chuckled

She laughed “Fine, I miss you. It’s been a long time since you were called to stay here”

I nod “I know right. But school is on Monday, again. I don’t want to study anymore” I complained

“Now, stop that. I know you’re smart” she winks and I chuckled

Then she finished cooking dinner and we ate together. While I was washing the dishes, she watched me.

“Abby, The Andersons have a son?”

“Yes, didn’t I mentioned it to you before?” she asks I shake my head

“Really? He’s been studying in London but then he’s trouble himself, that’s why Ben told him to come back he end study instead” She says

Benedict is Mr. Anderson. And Maxine is Mrs. Anderson.

“Oh, what kind of trouble is he capable of?” I ask

“A lot. I baby sat him since he was a kid, he was always up to something, pranks and just everything. When he was in grade school, Ben and Max were called and they had to fly to London. He glued their principal on his chair and put gum all over a girls’ hair”

“I know he’s just a kid but it never stopped until highschool, that’s why now, mid highschool, he’s coming here to finish it. “ she continued

“It is, so they said if he didn’t go home, they’d cut everything from him” Abby says

“So, he’ll be back today?” I ask but she shook her head

“He’s been here for a week but always leaves and comes back late, always a little drunk”

I mouthed an “oh” and bobbed my head

After that, I went to my room, as Abby says she’s also tired.

I dropped myself unto my bed after hours of fixing my stuff in the cabinet on the table to prepare for classes again, on Monday.

“Finally, some rest!” I tell myself, I check the time and it was already eleven in the evening. I didn’t even shower yet.

I, once again got up and go for a quick shower. Then I hear a car arriving, that must be him. I continued to shower, and then when I was done, I forgot to bring myself some clothes. Stupid, Olivia. I wrap myself in a towel.

When I opened the door, I went to my closet and dropped the towel to put some clothes on.

Then I hear a groan behind me. I turned around and there, a man on my bed. I screamed.

He gets up and looks at me from head to toe, then he smirks. I forgot I was naked, so I immediately picked up my towel and ran out.

“What is it dear? Are you alright?” she asks and she holds me as I was shaking.

Then he descends from upstairs. With a smirk on his face.

“Pervert!” I scream at him

“Marcus, stop it. The girl is shaking” Abby says

“What? Am I wrong?” he says putting his arms in-front of him

“This is Olivia, she’s your baby sitter” Abby says

His eyes widen. “What the f---” Abby cuts her off “Watch your language young man”

“Who told them I need a baby sitter?!” he shouts angrily

“They are your parents. Now, go to bed. The right bed this time Marcus, the one on the right is yours” Abby says

He scoffed “I forgot where my room was, I’m a little drunk. I got em’ mixed up” he says

“Now go, run along” Abby says as she cooed me

He does. But he stops when he was in the middle of the stairs. He looks at me and smirks “Nice body by the way” then left

“Are you okay?” Abby asks and I nod

“Yeah, just startled that’s all. I should’ve locked the door. I’m sorry, I woke you up”

“It’s fine. He is trouble I tell you. So, lock the door and don’t be swayed by his good looks. Alright?” she says and I nod.

After that I went upstairs, to my room and locked the door. I took a deep breath.

I change into my pajamas and then went to bed.

I kept thinking, how on earth I will be able to look at him tomorrow, with him teasing me about this. I hope he forgets about it and just ignore me.

I groaned. Then not long after I fell asleep.

Morning came and it was already five in the morning. Abby usually prepares breakfast at seven, so I still have time to go for a run.

I change into my running attire and went off. I stopped by the playground. I smiled and remembered my father who used to bring me here, sadly, he died due to a car accident and now, mom is acting different day by day because if his death. But I got used to it.

Then I left. I went back to the house, And I find Abby cooking breakfast, and it’s 6:30 in the morning.

“Early, aren’t we?” I say and drank some water

“Eating breakfast like that?” She asks as she serves the food

“Yeah, why not?” I say biting into a piece of bacon

“Good Morning, Abby.” A voice says and we look over who it was and it was Marcus.

“Sit down and eat” Abby says and he obliged

During the breakfast he didn’t mention anything about last night.

Then there was a moment of silence.

“That’s great, even at school” he says sarcastically

“Don’t worry. As long as you don’t get in trouble. We will not have any problem”

“Well that’s even harder to do” he answers and chuckled

After that, we helped Abby to fix the kitchen and I washed the dishes, as Marcus sat there with his phone scrolling.

When I was done, I went to my room to shower.

“Olivia!” I hear Marcus shouts, I open my bathroom door.

Then after a few minutes, I went out of my room, see him waiting for me leaning on the wall.

“I need to ask you a favor” he says

“Depends on what it is” I say and he smirks