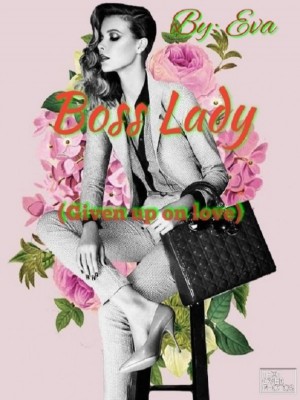 BOSS LADY (Given up on love) By Authoress Eva Prologue Meet Wanitta parks a young and beautiful billionaire, who has vowed that if her current relationship with justin (her soon to be husband, who has proposed her) does not work out, then she will give up on love, because she has had series of heartbreak. ...................... Then Meet Alexander, a young boy who is still struggling to make a living What if fate brings this two people together And, what happens when Alexander later falls in love with wanitta, when she has already given up on love?

' Do you take Justin Williamson as your lawfully wedded husband

' yes, I do' I said grinning from ear to ear

And when I almost gave up on love,

Justin showed up and proved to me that, I can still be loved and cherished

Yeah, am this billionaire who has had series of heartbreak like numerous heartbreak all the guy have met all came for the money, or maybe because I was too beautiful and they just couldn't resist my beauty

He had to date me, so he could use me as a means of getting money

But, things didn't go as plan cause, I refuse giving him any money,

That got him angry, and told me his reasons for dating me, before breaking up with me

That night, I stayed awake all night, crying my eyes out

My second heartbreak was when I was eighteen

He also dated me because, I was very beautiful and popular in highschool

So, he wanted to use me to get fame

It's in the past, and am about to face the future with my beloved Justin

Am just so lucky that I met someone justin, when I almost gave up on love

Justin was the only man, who loved me enough to get married to me, he is just this responsible cute guy

He didn't wanna get married to me because of money, because Justin is damn rich

' By the power vested upon me, I now pronounce you as hus.........' the priest was saying, when suddenly the lights blast out

I heard mumbling sound from the congregations

All of a sudden the projector tune on

Then justin's face showed up

He sipped from his drink, alcohol

Then, he dropped his drink on the counter, and brought out a packet of cigarettes from his back pocket, took one out of it and dropped the remainings on the counter

'Like seriously, I thought he told me that he doesn't drink or smoke'

these is embarrassing, my soon to be husband in a club drinking

and smoking at the projector in the front of these people

He took the cigarette in between his lips, he was about to light it, when I heard a voice from the background said, without me, seeing his face

It seems as,he was the one holding the camera or something

'man, your getting married tomorrow, don't get drunk'

He raised a brow and smirk

'And that is the point, I will be getting married tomorrow, so I need to get the best of this night, even if I will be cheating on her'

he mumbles the last past

Light the cigarette puffing out the smoke through his nostrils

his friend said and they both laughed

'but man, isn't these too much, remember your already married with three kids, what if your wife finds out, or worst She finds out'

he asked referring to me

'The truth is, I had to lie to my wife that, I would be coming to New York for a business deal but the truth is, I came here to make money through wanitta"

Okay...I thought he said he owned the Williamson empire, how come he is now saying he still wants to make money through me

"I wonder, how you did it, how you have to live with someone else's identity, without been caught"

Living with someone else's identify

A girl wearing just a pant and Bra, walked up to him

On seeing her, he smiled, pulled her by her hands, and made her sit on his thigh now, strangling him

He spank her butts and Nuzzled her neck as she moaned

He said, removed the cigarette from his mouth, threw it on the floor, and puff out the smoke above her head

'Yeah, more than your wife to be right?"

Charlotte asked, as she peck him on his lips

He said and kissed her

Is this Justin or someone else

The mumbling sounds from the congregation became loud

They were also surprised with me

"Charlotte, I will see you later"

Justin said, as Charlotte got down from his thigh and said

She said, and blew kisses at him

She smiled, as she walked out, with only her back showing on the video

Justin said, took the cigarette pack on the counter and brought one out of it

"Chill man, you just said you loved her now"

"That's the same thing, I do tell Wanitta everyday, but, guess what, I don't even have any tiny feelings for her"

He said and smiled

That voice asked him

'Then it's simple, I will force her to sign the goddam papers, and...kill her'

Justin started laughing, as that Same voice also joined him in laughing

Wait a minute, did I just hear him right?