Home/ In Your Embrace Ongoing 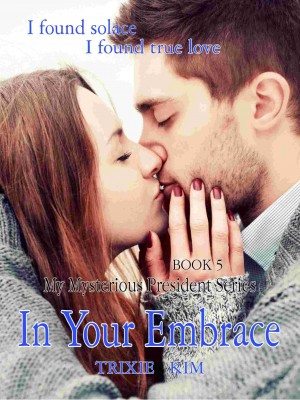 5th Book: My Mysterious President (Arvin and Vincy Elizabeth) . Fearless. Gorgeous. Independent young lady. That spells her name. . Arrogant. Mighty. Media's Favorite. That describes him. . They always bickered when they're still young. She was 10, he was 17. . He hated her. She hated him more. . Till one day, probably Mr. Cupid was bored playing with his bow and accidentally struck his heart. . The ever cute, carefree, witty girl was always surrounded by buzzing bees and he abhorred it to the core. He did all kinds of tricks to chase her admirers away... . But he himself had always scandals he couldn't run away from it. . Till this cute girl, now a fearless reporter had to take revenge for making her teenage life a misery by doing the same thing he did to all of her suitors before. . How could he just ignore the fact that as time passed by, his secret admiration towards her grew deeper and those scandals and criticism were just a facade to hide his true feelings? . Especially when she introduced a man to everyone on her parents' wedding anniversary. . Would Arvin Hansen, the heir of Hansen Empire, just shut his eyes ignoring Vincy Elizabeth and her boyfriend's sweet passionate kiss at the gazebo or would he proclaim his ownership now? . Something he should've done a long time ago!

About
Table of Contents
Comments (186)

First, I would like to thank you for giving your ample time to read In Your Embrace

. This is the 5th book of my series My Mysterious President, the rollercoaster love journey of Arvin Hansen and Vincy Elizabeth Thomas.

The sequence of my books are the following:

~ Flora and the rest of their friends COMPLETED

updates every other day

This is a fiction story created by the author's imagination. Names, places, and events that have similarities in real life are pure coincidence.

This is a non-exclusive signed book which means you can find it on another plat WITH MY NAME ON IT.

The cost of every locked chapter isn't under my control. It's the Novelcat or Foxnovel that decide on these.

Unlocking the chapters allows you to read the whole book but it doesn't give you the right to copy or reproduce this or publish it in another plat, on any social media forms, or youtube, or a different language. Infringement of the author's copyright is strictly implemented and legal action will always be executed.

He slammed the documents on his desk. He leaned on his swivel chair after. His eyes were fierce as his lips were sealed tight. His fingers slowly curled up into fists. He was sharply and blankly staring at the wall.

"General Manager Hansen, what are we going to do?" his assistant, Zandro, two years older than him but loyal and efficient, asked in a trembling manner.

"Leave me alone for a while, Zandro. Let me fix this up!" he condescendingly uttered.

"That woman is really getting to my nerve!" and added in a whisper before Zandro could turn around.

"Sir, are you going to tell this to the Director?" he asked, more anxious this time.

The documents Arvin just slammed were a rejected business contract that would cost billion-dollar profits. Actually, it was already sealed and the only thing left was the formal signing. However, their new clients changed their minds at the last minute and returned the documents to them 'unsigned'.

He was going to have a serious scolding again he thought and he was right. Coz the moment he answered Zandro's alarming question, his phone rang and Kevin's name appeared in bold letters.

He cleared his throat before he swiped the green icon.

"Dad!" a casual but a little trembling voice aired out.

Upon hanging up, he breathed a long sigh. He got up heavily.

"Crucifixion begins!" he whispered at Zandro who was also shaking like a leaf when he tapped his shoulder.

His saunters were regal. His stern look outlined his hardened jaw and broad shoulders as he stepped in a heavy but light catwalk. His customed-tailored suit matched his domineering personality especially if his head was looking ahead. The world imprinted a carbon copy of his dad's features

But this time, although his looks still had those characters while calmly approaching the 35th floor, his head was looking down the entire trudge.

He even accidentally bumped into Sam, Kevin's long-time assistant.

"General Manager Hansen, the Director is waiting for you!" he confirmed when Arvin stared at him asking.

"How's the weather?" he asked meaningfully.

"Hmm, 38 degrees celsius and hopefully it would get a bit cooler!" Sam also whistled.

He who didn't even get in yet was now sweating. Especially when Sam twitched his lips and shook his head.

"Sam, has Arvin arrived yet?" when Kevin's loud voice almost made them jump to their feet.

"He just arrived, Director. He just went to the restroom!" he replied while shutting his eyes tight.

"Thanks, Sam!" Arvin also whispered before he strode towards the entrance of his dad's office.

His knock was careful and Kevin knew well it was his son.

"Come in, kid!" he called in a strong lordly tone.

As he opened the door, Kevin was sitting sluggishly on the couch. A scenario he wasn't expecting. He thought his father was leaning on the backrest of his swivel chair at his desk... mighty and supreme!

"Sit kid!" he even calmly uttered.

He sat at once with his head looking down the floor.

"You know why you are here!"

"Yes, dad. About the contract!" he lifted his head this time.

His looks showed a lot of anxiety-like a kitten who had lost its mommy.

"What's the reason why they suddenly changed their minds?"

"It's because of the flash report on the entertainment news from Media X!"

"What?" Kevin's voice was monotone.

"That I had a one-night stand with a famous model. There were photos of us going in and out of our hotel. There was a video, too. It's a blind item but the netizens could guess it's me and Caroline!" he gasped for air after explaining in one breath.

Kevin just stared at him. Then he sat properly as he clasped his hands together while they nestled on his lap.

"These clients are stern to their household rules and always apply them in their company. They are the believers of you know true love and the haters of scandals like this. They believe trust and loyalty to your woman are the same as how you do to your work!" Kevin explained while raising his eyebrows and shrugging his shoulders once in a while.

Arvin was just nodding while listening.

"So tell me, is the scandal this time true?" he asked again.

Giving his son a recall of his previous scandal with a pop star just six months ago.

Arvin glanced around as he also clasped his hands on his lap and twitched his lips. Without looking at his father, he answered, YES!

Kevin couldn't react at all. Was he going to meet his future daughter-in-law now? Was he already going to be a granddad? He shook his head on those ideas. His son was 25 and at his perfect age of settling down but he still couldn't fathom the situation if ever.

"Arvin, I will give you 24 hours to fix this. By any legal means necessary. But hey! Don't stoop down your level. You must know when to stop bargaining. This isn't about the billion-dollar profit a month but it's all about the requirements of being the heir of Hansen Empire. The board of directors is always eyeing on that position!" he never stopped giving Arvin a heads up that his enemies were in the same location they were in. They were also in the building.

"All right, kiddo. That's all!" Kevin wrapped it up as he rose from his seat giving his son a sign to leave his office.

"Wait! Are you going home for dinner later?" he forgot to ask.

"Maybe I will be staying at my villa tonight, dad. Cendrick and I are going to Lotus this evening!" he smiled while twisting the knob.

Kevin just nodded. Arvin felt relief that his father didn't scold him unlike before. Most of the time Kevin would give his heir a serious sermon if he had done something wrong but today, he thought his father was on drugs!

Upon leaving his office, Kevin called Vincent right away.

His voice was more of a tease than an apology.

"You happy I'm going to lose a billion dollars huh? Are you still my friend?" Kevin chuckled.

"I know even if you will lose that d*mn contract, the empire won't get in red inks. And I also know, my godson will pull that off. He has gotten your blood, the Williams, and the Lees!" Vincent chuckled back.

"What's that score with these two anyway? Why are they always fighting?" Kevin squinted.

He was imagining Vincent would be leaning on his swivel chair now. He might even be smiling in the air.

"I don't know but Elizabeth here never dated anyone yet since. Maybe it has something to do with Arvin!" he replied.

"Well, whatever the reason is. I just really hope, Arvin will end up with Elizabeth and not with any woman who just needs his surname!" Kevin sternly uttered.

"Amen to that. I hope so, too!" Vincent agreed.

While they were talking, they had no idea that Arvin was already in his black Mayback driving at breakneck speed going to the Media X building.

Upon parking his car to the VIP slot, he strode towards the lift and pushed 5. As the lift swung open on the fifth floor, everyone halted.

"Young Master Hansen!" one of their staff greeted his fierce look.

"General Manager Hansen!" another staff bowed while Arvin walked past them.

When he saw the editor-in-chief, he stopped and sternly stared at her.

"Huh! General Manager Hansen! You surprised us!" the woman whose name was Donna would like to run away at the moment.

She knew well why the heir of Hansen Empire was here in their small office.