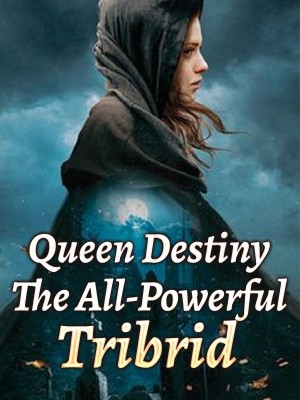 The Moon Goddess chose Destiny to be the ruler and Queen of all Supernatural Beings, She has brought Unite. Harmony, Peace Until The crown , her kingdom that stands united threated. Will the Royal Member be able to stop the threat and and protect the kingdom and how will they reacted when they find out that the threat came from someone in their pack. Can they catch the traitor. Will they find out why loyalties removed

Let me introduce myself and my friends and family to you , I am Destiny Faith But everyone calls me Dee I  am  one only  Tribrid in existents, I am a Witch, Dragon and Werewolf, I am 17 years old I will be 18 in 3 days, and I will finally be a completely transformed Tribrid, that is because on my 18th birthday I received my last and final part of me and that is my wolf, I have been practicing and doing spells and making potions since I was 4 or 5, I unlocked my witch first which was when I was about 2 years old when I accidently sent my older brother flying in the air because he was being mean to me and that when my parents found out I was a was going to be a powerful witch because normal witches didn’t unlock their abilities until they were at 10. Then I got my scales and my Dragon Miracle at 10, she only surfaced because of a house fire that I we able to help save my best friend and here twin brother in Dragons usually don’t get their Dragons until they are 14 and they don’t shift into dragon until they are 16, My parents were ecstatic that I unlocked another trait but for me that meant more training and precautionary measure. I was glad that I didn’t unlock my wolf before it was time because I wanted to be able to enjoy shifting with my two best friends. Now I’m 5’6 I have long Silver hair with purple highlights in them and yes that is my natural hair and I have purple and with a tint of silver eyes. As for my family I will go ahead and introduce everyone.

My Mother Angel is a very powerful Hybrid She is a Witch, and Werewolf My mother is roughly 5’4 with long black hair with natural purple highlights she got silver eyes and Olive Skin tone. and My father Hades is the Alpha of the only Dragon and Werewolf Hybrid pack in the world, my father is 6’8 Muscles toned he’s got Brown hair and Hazel eyes and a caramel skin tone. My parents are the Alpha and Luna Amethyst Moon Pack the largest Hybrid pack in the world. My brother Justin is 3 years older than me he is a Hybrid Dragon/ Werewolf, and he is getting ready to take my father position as Alpha, my brother just finished his degree at Harvard with a Law Degree. My Brother is 6’7 has is Muscle built like my father he also has brown hair like our father, and he has silver eyes like our mother, and he is light caramel skin toned. He was blessed by the moon goddess because his longtime girlfriend and my best friend turned out to be his mate and the next Luna of Pack Tyler,

Tyler well she was a witch/werewolf. The skills that Tyler possessed were amazing she started learning with me at about 8 years old when the magic started surfacing Tyler is 5’7 with long blonde hair and gorgeous baby blue eyes, Tyler is about 10 days older than me she grows up in our pack her father is my dad’s Beta’s.  She is my best friend I was excited and happy that she was blessed as my brother’s mate and then we have my younger brother Bryant he was only 16 but he was 6’6 built because he worked out all the time, he had jet black hair Hazel eyes like dad.   Tyler was the also the youngest of her siblings she had an older Brother and Sister. Her Brother Dean was two days younger then my brother they are best friends and he is my brothers Beta when he take over, Dean is 6’7 sandy Blonde hair abs to die for and Bright Green Eyes  Dean is a Warlock/Werewolf Hybrid  and there is Kiki she was the middle child she was 2 years older than Tyler and Myself she was about 5’9 With  Long Black Hair  and Bright Blue eyes  she is also a Witch/ Werewolf Hybrid, She wasn’t as talented a Tyler was with her magic but she was a very strong and cruel warrior in her wolf form,  Kiki was the Erin’s oldest brothers mate, Their parents  were  Miranda Witch/werewolf hybrid she was about 5’6  she has shoulder length dirty blonde hair and Sea Green eyes and she great at casting spells, Their father was Marcus is a warlock/ werewolf hybrid he stood about 6’7 broad shoulders and a six pack he had brown hair and Baby Blue eyes he was my dad’s best friend and Beta, Dean found  out that his mate happens to be mine and Tyler’s other best friend is Erin and she is the daughter of my dad’s gamma .

Erin was about a 30 day older than me and unlike me and Tyler Erin was a were panther/werewolf hybrid, she is 5’3 she has long burgundy and silver eyes, Erin had 3 other siblings She had her older brother Damien who was my brother’s best friend and he soon to be Gamma he was 6’6 abs for days jet black hair and dark green eyes. Her twin brother Lucas was about 6’4 he had a six pack he had reddish-brown hair and he also had silver eyes like Erin and then there was Avalynn she was Erin’s youngest sister she was 5’5 with shoulder length burgundy hair and dark green eyes. Their mother Elsa was not a natural born where she was born human, and she was turned into a werewolf when she meant their father. Her father Ezra is my father’s gamma but he also a hybrid comes from a long line of were panthers his mother is a were panther and his father is a werewolf he was the first hybrid of his family.

Our pack territory was huge we had about 5,000 pack members all over the world we had pack territory all over the world each pack location had their commanding officers that would report to My father, Beta and Gamma, my mother the Luna and the wives of the Beta and Gamma stayed very busy because they had to keep up with the members of the pack in all locations. I was kind of relieved that I wouldn’t have to step up as of right now and take on the pressure that Tyler and Erin, Kiki had line up for them and since they will be taken over the rolls of the leading ladies after I turned 18 and became a Full Tribrid.  My parents and I have been discussing about letting me start my own branch off the pack since I am very powerful Tribrid, dad said that he afraid that he gives me my own branch that I will steal Justin’s Luna, The Beta’s mate and the Gamma’s Mate and he does have a point because I sure will because these ladies have been training, learning, and fighting with me since we were children.