Home/ Heroic Lady Is Back Ongoing
"Let's go to the outside world, and let's see if there's anyone who can make it to the end of the world. I'll make sure to make sure that my master is alive." 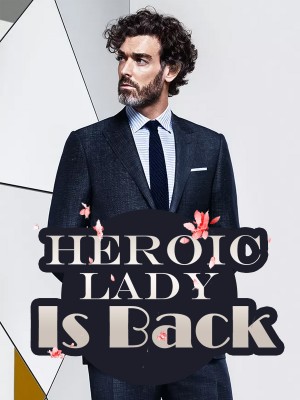 Heroic Lady Is Back

As for the other three, Wen Lan was still alive, and it seemed that they were all at the bottom of the world. And what's more, who's the one who's missing? It's really a big deal! The person who had been waiting for him was alive. Wen Lan had said that it was not a big deal. He was going to take care of his life, and he could only protect a child like her. Outside, there was a person who seemed to be able to reach the level of health. Wen Lanlan said that he wanted to reach out to the other side. However, he was still able to reach the end of the journey, and he could not get out of the way.

"Cui Sheng," Yu Huai smiled gently, turned the office chair and looked at the man who broke into the office. "Do you still like my gift?"

"Yu Huai, are you crazy? You ruined my three wedding just for a dead man. What on earth do you want to do?" Cui Sheng slapped the table angrily and questioned Yu Huai. Yesterday was his third wedding. As a result, before the bride arrived, he became a joke in the imperial capital again. All this was caused by this man in front of him. Thinking of this, Cui Sheng hated Yu Huai to the core.

"Of course I want you to accompany her. It's all because she likes you so much."

Yu Huai murmured like a lover, but his words made Cui Sheng's hair stand on end. He heard Yu Huai cough twice. Looking at his pale face, Cui Sheng couldn't help but take a deep breath. "You are crazy. Wen Lan has already died..."

Cui Sheng did not dare to say anything else. Yu Huai looked at him as if there was a knife hiding in his eyes, gloomy and gloomy. If he continued, Yu Huai would really kill him. Yu Huai had already gone mad since Wen Lan's death.

Yu Huai coughed twice again. Recently, his body was getting worse and worse. He blinked his eyes, and Yu Huai suddenly pulled out a gun from the drawer. The last scene Cui Sheng saw before his death was the bullet flying toward his heart, and he smiled with Yu Huai.

"I'll send you to accompany her." Yu Huai murmured, playing with the small gun with one hand. It was not until night fell that Yu Huai stood up and looked at the bright moon rising by the window. She chuckled, with relief and madness in her smile. "Since he has gone, I'll go with you. But this time, can you look at me and don't like him anymore?"

Yu Huai's thin body slowly fell backward. A transparent hand reached out to catch him, but he could only watch helplessly as the body fell to the ground, making a dull sound.

Wen Lan looked at the person lying in a pool of blood. After a moment of silence, he faintly replied, "Okay."

Wen Lan was dead, but she was not dead. She had been wandering around Yu Huai and Cui Sheng all the time, and no one could see her. She watched the warm sun on her heart turning into a wicked one. She watched the darkness that she did not know invade the Wen family. She had to bear all the responsibilities for the destruction of the Wen family!

Wen Lan thought, "She has led a miserable life. In vain, I still think that I'm powerful, but I can't even see a person clearly. I was plotted to death and dragged down my family. However, I cherish it, but I didn't cherish it."

Yu Huai, Yu Huai... There was a faint sigh in the air. If it was in the next life, Wen Lan would cherish Yu Huai's love. Seeing people carry Yu Huai's body away, Wen Lan only felt darkness before her eyes, and she could no longer feel it.

In fact, the capital was a city without any night. In the bright night, a white Mercedes slowly passed by and went straight to the "Unnightless Heaven" of the capital.

In the "Unnight sky", a woman dressed in military uniform woke up from the dim state. When she opened her eyes, she saw a smiling face with a gentle and shallow smile.

"Don't drink too much. You're almost drunk." Cui Sheng smiled and handed a glass of sobering soup to Wen Lan. "Drink some hangover soup. I asked someone to prepare it just now."

Wasn't Cui Sheng dead? Why would he appear in front of her? Wen Lan's eyes darkened, and she clenched her hands, which were hanging down slightly, and smashed the soup bowl to the ground along the direction. The noise around her suddenly stopped, and everyone's eyes were secretly looking at Wen Lan, who looked normal, and Cui Sheng, who was caught off guard and looked a little gloomy.

Wen Lan glanced at Cui Sheng with her fierce eyes. Then she looked around and saw the sign in front of her, which was obviously "Unworld". She saw a group of unruly boys and girls around her, as well as the young general's medal on the table, which was placed on the table by others. Wen Lan seemed to understand.

At the age of 22 years old, when she ascended the position of Major General, she was Wen Lan, the First Miss of the Wen family in the Imperial Capital, the youngest Major General in the empire, and the brightest star in the army. Wen Lan reached out his hand to pinch the wine glass, swallowed a gulp of cold wine, and laughed arrogantly. She came back from hell with all the secrets and the desire for revenge! The wild voice came into Yu Huai's ears, who had just arrived at the door. Yu Huai was stunned, but the corners of his mouth raised.

"She seems to be in a good mood now," thought Yu Huai. He slightly blinked his eyes, pinched the box in his pants, and then pushed the door open and walked in.

Hearing the sound, Wen Lan looked up and saw Yu Huai smiling outside the house. Her heart suddenly beat. When she thought of Yu Huai committing suicide, there was a faint smile on her lips.

Yu Huai smiled, wearing a white suit and a light blue tie, but his face was paler than a suit. Wen Lan watched him slowly walk into her, and her fingers moved slightly. She was really afraid that Yu Huai would become an immortal like this.

Being stared at by Wen Lan undisguisedly, Yu Huai secretly tightened his grip on the gift box. Then he elegantly handed the gift box to Wen Lan. "I heard that you've leveled up again. Congratulations."

Yu Huai was in poor health. His voice was soft and gentle, like a willow branch brushing the calm lake surface, making ripples in Wen Lan's heart.

Wen Lan did not answer. He just nodded slightly and clenched his fists to control the thought of throwing himself into Yu Huai's arms.

Yu Huai had not intended to see what kind of reaction Wen Lan would give him. Although they were childhood sweethearts, the attitude of Wen Lan toward him should not have liked to see him. Unexpectedly, he saw Wen Lan nod slightly, which made him a little stunned.

Cui Sheng saw that Wen Lan's expression was not very good, so he glanced at the servant who was standing aside. He was a little embarrassed. "Ahem, Miss Wen is treating you today. You should check the invitation card carefully. What if someone with malicious intentions comes in?"

The innocent servant looked at Wen Lan, then at Yu Huai, and finally lowered his head. Everyone in the Imperial City knew that there was some conflict between Childe Yu and Miss Wen. The key point was that they could not afford to offend these two people. Every time they encountered such a conflict, they could only make things difficult for them.

"Since you're here, if you're free, you can stay here." Wen Lan stopped Cui Sheng from talking. She swayed her glass and invited Yu Huai.

Not to mention Yu Huai, even the waiter's eyes widened. Everyone in the Imperial City knew that Yu Huai would not be seen wherever there was Wen Lan. Was the Miss of the Wen family ecstatic tonight? Fortunately, Wen Lan did not pursue the matter. After the waiter let out a sigh of relief, he saw that there was nothing he needed to do on the scene and immediately withdrew. He was afraid that he would be affected by the battlefield later.

Yu Huai was surprised, but he didn't say anything. He just smiled and sat not far away from Wen Lan. Occasionally, he would drink wine and sometimes he would look at Wen Lan. Under the dim light, his inky eyes flashed a strange look.

Wen Lan also sat down to drink. She knew that Yu Huai was looking at her, and she kept a perfect distance from her. She faintly wanted to laugh, but also felt sad. She did not know what Yu Huai was thinking. He was cold outside the edge, keeping a distance that she would not hate, but never leave.

A pair of phoenix eyes slightly closed, as if they were drunk. Looking at Yu Huai sitting opposite him, there was no one else by his side. He held a wine glass alone, and his face could not be seen clearly, but he looked more reserved under the white suit. Yu Huai had a gentle and indifferent contradictory temperament, which was particularly charming under such a light. Wen Lan suddenly opened her eyes again, patted the seat where no one dared to sit, and called him, "Yu Hui."

Yu Huai looked up, and there was a flash of surprise in his calm eyes. It seemed that Wen Lan was not quite right tonight. Not to mention Yu Huai, even a group of noble young masters and ladies sitting around him, who were extremely active, stopped singing, chatted, closed their mouths, and danced quietly. The scene fell into a trance. More than a dozen eyes glanced back and forth at Wen Lan and Yu Hui.