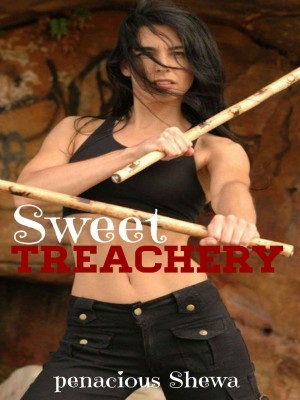 Ever wondered what it feels like for everything you have known all your life to be yanked from you in just one night? This is Kayola's reality, as she goes through hell in the hands of Rogue Lord, Devilio. But now that he has given her his heart, will she forgive his trespasses, or will she carefully lead him to his doom? Find out in Sweet Treachery. This is one novel you wanna read.

About
Table of Contents
Comments (7)

It is a cold, dark night. The darkness is so thick, that it can be cut with a knife. It is however not difficult for her to see, as her vision is excellent. The harsh, chilly air of the forest slaps against her, but she keeps walking. She is deaf to the chatter of the nocturnal animals, as she refuses to take her eyes off the figures walking briskly ahead of her.

“Mother!” she cries, but there is no response.

“Papa!” she cries again, but there is still no response.

Magically, the moon appears in the sky, bathing her with its light. The figures turn, and she sees their faces.

Her parents. She was right.

As she moves closer to them, they fade slowly into the forest, and she clutches her chest, letting out an ear-piercing scream.

Kayola jerks out of her sleep, drenched in her own sweat, her forehead beaded with perspiration. She lifts her hand to her face and realizes she has been crying.

It is the same nightmare, and it always ends at the same scene. She is never able to touch her parents. If she can’t touch them in real life because they are dead, why can’t she touch them in her dreams? She fingers her chain, an emblem given to her by her father on her 21st birthday, and she begins to reminisce once again, about her life, and how gratifying it was, before it all changed, all at once.

The forest is never dry

It is ever filled with howls

And it all goes awry,

when the Rogues prowl.

The Taga Wereforest is a large forest, home to two categories of werewolves: The Conscientious Pack and the Rogues. The forest is located in the deepest parts of eastern Crete. It is still today, unexplored by humans, and the werewolves have made it their home. Legend has it, that any human who tries to explore the forest ends up dead. This, has, therefore, kept humans, especially hunters, from the Taga Wereforest.

Right in this forest, there is a demarcation between the Rogues and the Conscientious pack, and there is usually peace unless the Rogues decide to invade the territory of the other pack. Thus, these two have for centuries, been at war. There is a commendable development in both territories, as these rival wolf packs have individually developed their economy and infrastructure, ensuring that there is no iota of interdependency. There are mansions, hospitals, and schools in both territories. And, you guessed right; they do not trade with each other.

Milos is a tall, handsome, young man, a full-blooded werewolf. His father, Stocles, is the head of the Conscientious wolf pack, and of course, he is a man of war. He has known war all his life, and he only married Milos’ mother so he could procreate and keep the bloodline running. Stocles begins to take Milos hunting right from the time the latter is five and has since taught him all he needs to know about war. The Rogues have been successfully controlled by Stocles, and he wants to keep it this way. Thus, he equips his son with adequate knowledge to lead and protect the pack, and Milos, a valiant young man, learns obediently under his father’s rigorous tutelage.

It happens that the Rogues invade the Conscientious Pack, and kill a number of werewolves, including two pregnant wolves. Angered by the audacity of the Rogues, and their wickedness, Stocles handpicks his finest pack warriors, including his son, and they strategize. Six full months later, they retaliate, and they successfully murder Alexander, the leader of the Rogues in cold blood. However, as they endeavor to escape, Milos is shot in the back with an arrow. The other warriors quickly lift him from the ground, and they are able to go back into their territory. There, he heals slowly, but surely. It is at this point that the whole pack holds a meeting. There and then, they mandate Milos to find his Luna before his 25th birthday, which is in five months. They also order that he does not venture out of the territory until he has found his Luna, marked her and caused her to be with child.

Milos is unhappy about the recent development, and he is disconcerted. After he recovers completely from his injury, he goes back to the training field, but things are not the same. He is distant in his training, and he is not as active as he usually is. His aging father is worried and calls him into his room. There, he asks Milos what the problem is. Milos tells his father that he is bothered about the fact that there is a strong possibility that he does not find his mate, his Luna. Stocles assures Milo that he will find her. Milos rests assured, and soon, he is back to his former self.

It is a bright night. The moon shines brightly in the sky, and the night echoes with promise. He is racing towards her, her scent filling his nostrils. His paws vigorously pound the soft, cold soil of the forest, leaving his prints behind him as he runs. Her scent keeps getting stronger, and all he wants to do is behold the one who smells so good. He hears his wolf growl deep within him, and he tries to control it, all to no avail. His wolf eventually wins and turns him in the opposite direction, and the scent is distinctive. He immediately stops dead in his tracks.

And he sees her. Well, her back view.

Tall, dark-skinned, and curvy in the right places. Exquisite, magnificent. He slowly moves towards her, dying to see her face, but instead, like a mist, she gradually vanishes.

Milos wakes from his sleep, his heart pounding against his ribcage. He is discombobulated. What could this dream mean? Who could she be?

There is a knock on his door. It is his personal steward, Eutychus, here for his wake-up call.

Good morning, Master Milos, it is almost time for your routine training” he says, and bows out of the room.

Milos gets out of bed, stretches, and walks into the bathroom. While in the shower, he reflects on his dream. Will he ever find his mate? Why is he being denied the opportunity of seeing her face?

He steps out of the shower and promptly wears his training clothes. He picks up his sheath, which clothes a Vanatian sword, the one his father gave him on his 18th birthday. It is passed from generation to generation, and it is a lethal weapon of war, recognized and feared by all, even by the Rogues who claim to fear no one. The thought of his mate plagues him again. Will he ever be able to pass it to his son? Will he ever procreate?

He again jolts out of his wondering and exits his room. He trains with his father for his routine six hours, and he goes back to the mansion. There, he is presented with his itinerary for the day. He is to take a tour around the pack, with his father, and then he has the night to himself.

It is late at night, at exactly ten p.m. Milos rouses from his sleep, and the moonlight pours into his room. The night is brighter than usual, and he immediately realizes why; it is a full moon. He feels his wolf growl deep within him. Slowly, at first, then it becomes more intense. Milos hears the night call unto him with a kind of urgency that he has never experienced. He jumps out of his bed, out of the room, out of the building, and into the night. He transforms and races into the thick forest. As he does, he gets a déjà vu feeling, and he accelerates. He can hear voices, indistinct at first, then crystal clear as he comes closer. He halts, as he recognizes the howl-like voices. Unmistakable voices, those he has trained all his life to apprehend.

He circumspectly moves towards them, camouflaging with a tree, and he gets a pretty good view of what they are doing. They surround a young, slender lady, human from all indications, and they begin to harass her, passing her around, and they make threats about raping her in turns and then finishing her off. Milos knows from considerable experience, that these are not empty threats. These are Rogues, and they are always out for blood. Ruthless and evil are they, and pain excites them. One of them tears her white dress apart, and she screams in horror. Her screech pierces Milos’ heart, and he immediately loses his last shred of control. He charges at them, and in milliseconds, tears them to shreds.

All three of them.