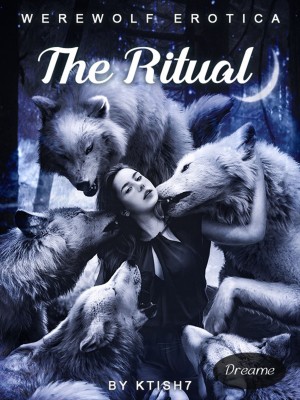 *Do NOT expect Werewolf Romance! This is Werewolf Er**ca, not Er**ic Romance! Graphic Language and Mature Content is Included! Alpha Vishous and his girlfriend Ava are werewolves living in a pack. To become the Luna of their pack, Ava has to complete some rituals that may leave her helpless and completely at the mercy of a pack of dangerous wolves and their God.

Vishious entered inside his modernly beautiful room which was decorated with chocolaty and white color interior. That is where he saw his beautiful, brunette girlfriend sitting with her back against the headboard of the king sized bed in a sexy, bright red colored lingerie.

The top of the lingerie was barely covering her big bosom. Her round, juicy tits were spilling out of the cotton cloth, the sweet pink areolas of her tits peeking out slightly and giving just a hint of the softness that she was hiding under the thin red cloth.

A thin strap was straining against her milky white skin, turning her soft skin a light shade of red as it tried to hold the cloth together to her back.

Upon seeing him enter the room, she straightened and got on her knees and hands on the bed, facing him, giving him a clear view of the valley between her boobs and what she had to offer.

Vishous's lips dried in thirst. His tongue came out to lick the dryness off but he knew that the thirst that she had ignited in him could only be quenched by sucking on her nipples until they were sore to the touch of his tongue and millk was dripping out of them.

He had sucked on them like a little baby for a thousand time but he still could not get over the taste and fullness of them.

When he took those heavy breast in his hands and chewed them until he could see the tears of pleasure dripping down Ava's cheeks, he felt like there was still more left to explore. Still more skin left to exploit.

A smirk came on his lips. He loved his girlfriend wholeheartedly because she was like the other half of him. She was an angel who was literally a gift to him by the gods of seduction. She was his soul mate who knew just how to make him desperate for the touch of her fingers on his own skin.

She could turn him into a dog that stood with its tongue out, panting in front of her just so she could let it have a taste of her skin. And he would let her.

He was that much helpless in front of her.

Both of them were madly in love with each other. Mostly because of the satisfaction they received from their various sex adventures.

Both of them were werewolves.

Ava was a beautiful nineteen year old girl, turning twenty in a week. She was going to find her mate then. Everyone in werewolf world was supposed to find their mate once they were twenty years old.

Ava was a little shy but adventurous when it came to sex. She was is personal sex doll. A toy that he could lick and fuck however and whenever he wanted and she would still beg him for more.

Vishous was twenty three years old. He had not found his mate yet. Either his mate was not twenty yet or maybe she had died already.

Vishous and Ava had been together since the first day they had met each other one year ago.

Vishous walked towards Ava with predatory slow steps. Ava saw the hunger in his eyes and started feeling scared of him.

In an attempt to hide away from his gaze, she turned around on her hand and knees, showing him the sight of her ass. The red panty that she was wearing was sticking between her pussy lips, covering just the top of her clit.

The cloth was so thin that it was looking like a thin strap going around from her pussy to her ass.

His eyes roamed on her sexy body as she looked away from his gaze in shyness.

"Strip." Vishious whispered in a barely controlled voice. His throat feeling dry to the point of soreness.

"Wouldn't you want to do that, baby?" Ava whispered teasingly while turning her face to look into his green eyes.

Vishious's lips pursed in anger. He did not like to be teased. Getting teased just to get what was already his for forever always angered him and his wolf to no limits and Ava knew it very well from the very start of their relationship.

He stormed towards her and in a flash her sexy lingerie was in pieces on the ground. She tried to fight his harshness with useless attempts of her own but everything was futile when it came to an angry alpha werewolf.

Ava gasped loudly when she was grabbed by her hair and her head was harshly pushed down face first on the soft bed by Vishous. He got on the top of her body and straddled her hips.

She felt his slick, hard, monster cock digging between her ass cheeks. She could even feel the thickness of its veins on her soft skin.

"What did I tell you?" His asked while breathing heavily in her ear. Her scent was making him feel intoxicated but his anger was more dominant.

She moaned loudly when he increased the pressure of his cock to grind down hard against her ass, forcing Ava's butt cheeks to make space for his cock.

His hand, that was still clutching here hairs in a fist, pulled her head up forcefully. His tongue ran down the length of her ear. Slowly, it glided down from her ear to her milky white neck. Licking and tasting the essence of her skin that he had become so addicted to.

"What. Did. I. Tell. YOU!" With his every word he left a bite of hunger in his way. Licking and biting her skin, punishing her for not answering him while at the same time smashing his own lips on hers and stopping her from saying anything.

As his tongue reached to the bones on the side of her neck, his kisses turned into bites of a hungry dog that enjoyed chewing down on every inch of skin that it could find on its way.

"I fucking don't like to be teased!" He growled while kissing and biting on the skin of her neck harshly. "Now you better fucking enjoy what you deserve."