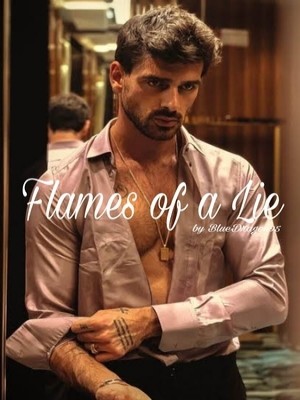 &quot;What are you doing here,&quot; he asked in bitterness making me curl my fingers and dig my nails in my palm in fear. &quot;I. I just came to keep it&quot; I stammered while not daring to look into his gray cold eyes. Without saying anything he moved in my direction and took the envelope and tore it into small pieces while looking straight into my wide fearful eyes. Then he threw torn pieces in my face. He grabbed my upper arm in a tight grip and dragged me near him making a gasp left out of my mouth. &quot;Do you think after deceiving me you can get away from me this easily?&quot; he asked in his cold voice making goosebumps form all over my body. I swallowed and said the words which I have said a thousand times to him before. &quot;I'm sorry&quot; I whispered in my small voice. Listening to it his eyes became darker. I should have not disguised myself as a boy to get this job. &quot;You should be,&quot; he said in his cold voice while letting go of my arm and trying to control his anger. &quot;If you're so sorry about it then sign these papers and let me decide how sorry you are after betraying me,&quot; he said in his cold angry voice while throwing paper on his desk. I just kept looking at the file with teary eyes. &quot;Why now you don't feel sorry anymore&quot; he mocked me. If me signing this paper will let him know how I regret doing it then I will sign them. With glassy eyes, I took the file and pen and signed the papers without even reading them. I just want to get away from him. I turned to get out of his life but he grabbed my wrist in a firm grip and pulled me back to his hard chest. I didn't want to cry in front of him but a long traitor tear slipped from the corner of my left eye. &quot;Now I will show you what I do to the liars,&quot; he said in his cold voice with an angry smirk on his lips while wiping the long trail of tears away from my cheeks. His words pass a shiver to my whole body making me look at him with glassy eyes. What have I caught myself into after signing those papers without reading?

"Thank you for coming. I hope you visit us soon with your whole family," I said to the elderly couple with a huge grin on my face. They have been coming here for so long. The grin on my face turned even bigger when I looked at their satisfied smiles playing on their lips. We work hard to get that satisfied smile on their face. My dad always says if the customer is satisfied he will more likely come back to find that satisfaction. His wise words rang in my ears to enlighten my mind. It was the motto of our Kings and I never dare to forget that.

"We will," they said with a polite smile on their face as they stood up after paying the bill. They are one of the regular customers of our restaurant. I kept looking at their retiring back with that same grin still playing on my lips. I only turned my eyes away from the back when they were near the exit door. I started cleaning the table when the bell rang stating that the elderly couple had exited out of the door of our restaurant. I collected their paid money and went to the cashier counter where my mother was going through some bills.

"Mom" I called her to get her attention away from her big account book.

"Yes honey," she said while adjusting her black frame reading glasses on her nose, and still looking at her big account book. Dad always trusted her with this because she is the only king in the family who is so good at managing these things.

"Bill of the table number nine," I said, handing her the money with a printed receipt of the customer bill of the elderly couple. She took it and started counting it. As I turned to go and take the order of other customers, my mother called me.

"Sage." I stopped in my tracks and turned to face her.

"Yes," I asked, turning to look at her while fixing my apron on my waist so it won't stain my clothes.

"The couple left you a generous amount of tip like always. I'm keeping it in the left drawer with your all-morning tip don't forget to take it while leaving" she said in her strict voice with a serious look on her face. I know why she is saying it like that.

"Mom, I don't want it after all. I'm just filling the place of our part-timer," I refused her with a small smile on my face before she could say anything and force me to take the money. I went and took the order of a bunch of friends who entered the restaurant just now.

"What would you like to have," I asked with a polite smile on my face. They looked at the menu and ordered what they wanted. With a new order slip, I went to the kitchen with hurried steps as more people were coming. More people equals too many orders. I saw our head chef plating the very delicious-looking food on the plate with full concentration. He didn't even notice that I had entered the kitchen and I was now standing beside him.

"Dad is table number seven's order ready," I asked him, causing him to break his attention towards the love of his life. Yes, making food and feeding it to the people with a big smile on his face is his only favourite thing in this world. He always says he finds happiness when his hand-made food satisfies someone's hunger. Listening to my voice he looked at me with a questioning gaze.

"Yes it is," he said while still looking at me with the same expression. "What are you still doing here Sage. Don't you have an interview today?" dad asked while knitting his eyebrows in question.

"Yes, I do. I still have two hours before it starts. I will help you guys until Elijah comes and then I will leave for my interview" I said while taking the order of table number six for the counter.

"Sage," dad said in his calm voice while taking away the plate from my hand and keeping it on the counter. "You don't have to do it, you have already done so much. So now you go and get fresh to leave for the company you are interviewing for," dad said with a polite smile.

"I did nothing compared to what you guys did for me. And after all, I'm just filling our part-timer place until Elijah comes then I will leave. I still have time" I said in my assuring voice while taking the plate and getting out of the kitchen, not before yelling from my back that new orders of customers are kept on the counter. I could picture the dad moving his head in incredulity.

"Don't get your clothes stained" he yelled back making me move my head in amusement. To save my time, I already dressed in the clothes which I was going to wear for my interview today. Balancing two plates in my hand while not trying to ruin my iron clothes I placed the order food on table number six. More than half an hour went into serving and taking orders from people as today is Friday and on Friday there is a rush in Kings as it's a well-known restaurant in this area.

"Is there no one to take a damn order in this restaurant" a yelling male voice coughed my attention as I was serving a couple? I turned my head to look at the source of a voice. It was a group of teenage jocks whom I saw entering the restaurant a few moments ago from the corner of my eyes.

"Enjoy your meal," I said to the couple with a smile and went near the Jocks to take their order before they complained more. From their jersey, I could make out that they went to the same high school as Elijah.

"Are you ready to order?" I asked with the same polite smile while taking out the pen and notepad from the pocket of my apron. A guy from a group with a small buildup grin while moving his eyes up and down throughout all my body length. It made me clench the notepad tightly and roll my eyes.

"You don't even have a damn menu here. How are we supposed to order out of air?" one of the teenagers with short hair said rudely, making me avert my eyes from the buildup boys grinning face to that rude boy. All the guys started laughing at his lame attempt of insulting me.

"Not out of the air but from the menu on which you have your hands on instead of your eyes," I said with a forced pointy smile while pointing with a pen towards the menu card which was just under his elbow which was lazy resting on the table. It made boys stop laughing. With arrogance dripping out of his face he took the menu and started looking at it.

"We will call you when we are ready to order before that send some water for us," he ageing said rudely while waving his hands to shoo me away with a smirk playing on his stupid face.

Be cool, be cool.

I repented in my head and was about to turn.

"Are you on the menu too?" that small buildup guy asked me, making all the boys wheeze in admiration at his comment. I saw people sitting on the table beside them looking from me to them and moving their heads in disbelief. I ignored his comment.

"Always be nice to the customer" I whisper under my breath while closing my eyes and taking a breath. "Call me once you are ready to order," I said with a forced polite smile and turned to leave but before I could move that boy tugged a strand of my long hair making me wince at the pulling sensation. With a set jaw, I turned to look at him. He smirked looking at my face.

"You didn't answer my question sweetheart," he said arrogantly as his ego was bruised by my rejection. I glared at him causing his smirk to widen. "Are you asking for some spanking by not answering me?" he said with a big boyish smirk on his face like he did something so big after those poor attempts of lame pick-up lines. His every word was getting on my nerves.

I can't take it anymore.