Home/ Mr.CEO's Loving Pettie Ongoing
For money, my family forced me to marry an evil man as his medicine... 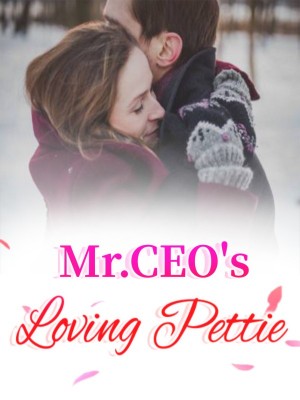 Love always comes silently. First things first, she, Shi Chu, never expect she would fall in love with him, Mo Yuhan. Rumor told he was disfigured and liked to abuse others. But apart from the fact that he lost control on the first night of their wedding, he had cherished her a lot. He even spoiled her. When she first wanted to rely on herself and had her own business, he fully supported her. Harassed by a rogue, she saw Mo Yuhan immediately appeared to save her. She thought she was just a tool, worth of 5 million, but his passion gradually melted the firewall in her heart. She found she would be jealous, seeing Mo Yuhan talking with other women. He didn't contact Shi Chu for ten minutes, so she called him immediately, "Hey, honey, you haven't contacted your babe for ten minutes?" Whoops, did she call him honey?

The big luxurious mansion on the mountainside looked more magnificent at the night.

There was a sudden thunder in the quiet night sky, and Shi Chu woke up from her sleep. As soon as she opened her eyes, she saw a ferocious face!

"Ah..." She screamed with fear. Her throat was immediately caught by a big palm. The man used so much strength that she could hardly breathe!

Shi Chu was so frightened that her face turned pale and her body went limp. Seeing the outline of a man through the glimmer of light from outside the window, she was more and more panicked.

The man in front of her was her nominal husband, Mo Yuhan, the third son of the Mo family.

But everyone knew that their marriage was just a deal.

It was said that Mo Yuhan was violent, ugly, and ferocious. He once killed someone when he was out of control. It was even difficult for his family to get close to him.

The Mo family had hired the most authoritative doctors and used all kinds of advanced instruments to treat him, but it was of no use.

There was nothing they could do. Everyone felt that Mo Yuhan had been possessed. The Taoist invited by Old Madam Mo said if they wanted to cure Mo Yuhan, they could choose a suitable girl and let him marry her. In this way, Mo Yuhan could become lucky.

This girl was Shi Chu.

Originally, Shi Chu refused them, but she had no choice. More than half of Qing City was under the control of the Mo family. If she escaped, her family would suffer!

She felt desperate in her heart.

At this time, she seemed to have seen a pair of bloodthirsty eyes. Mo Yuhan was like a beast that had suddenly awakened after being imprisoned for a long time.

"Help..." Before she could finish her words, Mo Yuhan raised her hands above her head.

He acted as if he had gone mad, ignoring her resistance and her cries for mercy.

After a long time, he finally came to sense.

Shi Chu had passed out, and there seemed to be tears on her fair cheeks.

Mo Yuhan narrowed his eyes slightly. His indifferent and lonely heart was suddenly moved a little.

He had another attack, and he had frightened this slender and naive girl.

Although the light in the room was dim, his eyesight at night was no different from that in the daytime. He could clearly see her beautiful and charming face. She looked so fragile.

Was she his wife?

The faint fragrance of Shi Chu gradually calmed him down.

Mo Yuhan leaned aside and covered her eyes with a pillow.

Shi Chu couldn't see what was in front of her, but she could clearly feel the presence of Mo Yuhan.

She panicked and wanted to escape, but he grabbed her arm. Suddenly, her heart beat wildly.

"Mr. Mo, I can marry you, but please don't hurt me, okay?" Her hoarse voice trembled slightly, and she looked so pitiful.

What happened just now scared Shi Chu. She thought that she was going to die here...

Mo Yuhan had regained his reason, and he didn't want to scare her anymore. Hearing how she addressed him, he frowned.

"Do you know what you should call me now?"

As soon as he opened his mouth, Shi Chu, who was still in a state of panic, was amazed.

She couldn't see his appearance clearly, but his voice was young, aloof, and indifferent. It even sounded... a little sexy at night.

However, Shi Chu could not forget how terrifying he looked when he was suffering from an attack. She did not dare to relax herself.

"I should... call you..." Shi Chu's heart tightened. She was so uneasy that she almost bit her tongue, but she couldn't say that word.

"Hmm?" He asked simply, but Shi Chu was so frightened that she almost cried out.

He was not impatient, but she could hear the threat in his voice.

She remembered that he once killed someone. He could kill her, couldn't he?

Shi Chu didn't want to die. She wanted to survive.

So she calmed down, took a few deep breaths, and forced herself to say, "Honey..."

"Call me like this in the future." A faint smile touched Mo Yuhan's lips, but his cold voice was still frightening.

"Okay..." Shi Chu was so scared, and even her voice was trembling.

She was like a frightened rabbit, looking so obedient that Mo Yuhan couldn't bear to say anything harsh.

"Aren't you curious about what I look like?" He asked flatly.

Shi Chu's body was stiff and she didn't dare to speak. How did she dare to be curious?

She shuddered. She knew that a man who had a pleasant voice was likely to be ugly.

He suddenly said these words coldly. She was so scared that she couldn't breathe.

He was moody. She almost thought she was going to die when he was angry, but he looked normal after he calmed down.

When Shi Chu took away the pillow and saw that the room was empty, she let out a long sigh of relief and felt so sad.

How miserable she was!

No matter how unwilling she was, it was an indisputable fact that she came here tonight.

There were some things that couldn't be changed. Instead of complaining about the cruel fate or her cruel family members, it was better to think about how to survive in the future.

She had been frightened all night. In the end, she curled up on the bed and fell asleep.

When she woke up the next day, there were lots of people in the room, which scared her so much that she almost rolled off the bed.

Realizing her current situation, she clutched the quilt tightly, looked at the group of servants, and asked, "What... are you doing?"

The servants held silver plates of various accessories and clothes in their hands and greeted her respectfully, "Good morning, Mrs. Mo."

She had become Mo Yuhan's wife, so it was reasonable for them to call her like this...

However, she was a college student, so she could not accept the title for a while.

"Madam has ordered us to take good care of you. Please go to see her after dressing up."

They didn't care whether Shi Chu would be shy or not, and they were pressed for time, so they directly lifted the quilt and began to put on clothes for her.

There were wounds on Shi Chu's body, and they had seen the wounds.

Shi Chu was embarrassed and anxious, but there was nothing she could do.

After dressing up, she was like a delicate porcelain doll, looking so beautiful.

Led by the servants, she bypassed the long and complicated winding corridor and walked to Mo Yuhan's mother's room sadly.

She took a deep breath and thought his mother would be vicious. The more she thought about it, the more her hands trembled.