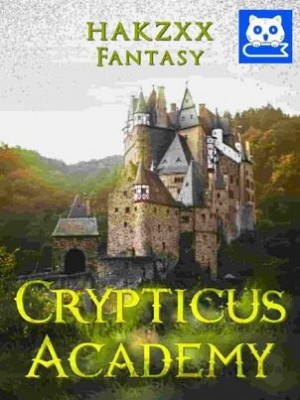 They have one goal, to find out the weaknesses and kill the Hulit in the Estallion, because they believed that these powerful magicians will destroy the entire country with inherent black magic. The skills of the students in the Academy are honed so that they can be used in the impending war. But Karyll Perge strongly opposes it, she will stand by her principles and beliefs. She will not allow another life to fall apart or to have a rift between the students of the Academy and the Hulit. She will find out the root of the dispute between the two sides. She will also draw an attention to another angle as to why some students join the organization feared by the citizens of Estallion. WELCOME TO THE CRYPTICUS ACADEMY WHEREIN EVERYONE HAS A SECRET TO KEEP AND A GAME TO PLAY WITH.

The black bus stopped in front of me and its door opened automatically. I then had the opportunity to check out the style of this vehicle and I can say its aura is very unique on the outside. The glass is so 'tinted' that I can't see the people inside of it.

The name of the university is written on the side of the bus.

Italic is the style while gold is the paint they used. It looks very elegant.

I smiled in my mind because I didn't expect myself to be able to go to this school that most people want.

I sighed before glancing at my watch to look for the time, "Exactly five-thirty," I said to myself.

I closed my eyes for a moment before turning my eyes back to the bus door.

In that, I saw a large bird, she was stepping on the top rung of the stairs on the bus. She focused her gaze on me, I also saw the movement of her head from top to bottom as if it ascertaining my identity.

"Why is there a bird here?" I asked in the air.

I was about to approach the big bird when she suddenly transformed into a human form with white smoke coming out of her body. She was wearing a white dress with a wreath of flowers resting on her head. I stepped backward and almost fell to the ground if I didn't just hold on to the steel sticking out of my side.

"Welcome to Crypticus Academy, Karyll!" she said and even raised her two hands with a wide smile on her lips. This woman looks like an angel. Her beautiful face was remarkable because of her red and thin lips, her nose was piercing and her eyes were narrowed, and she let her hair sway by the wind. Her body was also slim which added even more attraction to her.

I swallowed the remaining saliva in my mouth, adjusted my posture before slowly staring at the person in front of me. Amazing! This is my first time to seen something like this, it means she is an Estavez because she can change her form.

"T-thank you," I stuttered and avoided making eye contact with her. The center of her eyes is blue and this made me to felt to burry in the ground.

"I'm Hannah, an Estavez. You can call me Sister Hannah. I'll take you to the University. So, come on and get on board." She turned her back on me and started to go inside. I was right in my suspicion earlier, she was an Estavez.

Inside the bus, silence greeted me. All the students here are busy with the book they are reading. Sister Hannah guided me to the last side of the bus and commanded me to sit on the left side. I didn't have anyone next to me so I was alone in the whole seat.

"Just sit here, Karyll." She pointed her index finger at the chair near the window.

I nodded and smiled. "T-thank you." She just winked at me before heading forward.

Sister Hannah claps to get the attention of us, all. The other students then let go of the book they were holding because of a sudden noise.

"Guys!" She looked at us one by one, she even smiled sweetly causing the men, with us on the bus, to whisper. Almost all of them say the same thing. Hannah is really beautiful, which I will not deny. I felt insecure earlier when I saw her. She is so perfect!

"I just want to inform you that the school you want to go to is not a joke. Everything you don't see in the natural world is here, everything you don't experience, you will now experience. If you want to go back and surrender you can leave this bus ... " Sister Hannah said as if she's scaring us. When no one responded, she continued to speak, "But if you want to continue, hold on tight to your seat because we're going to fly the bus so we can get to the Academy quickly."

"W-what do you mean by flying?" asked a female student.

Sister Hannah transformed again into a bird and flew to the front of the bus where the old man driving the vehicle. Her beak stuck to its ear and in an instant, the bus sped up. I screamed and clung so tightly to my seat.

"WOAHH!" the men shouted as if they're still amazed at what was happening.

I thought it was done but I was wrong. My heart almost dropped when I felt the lift of the bus we were riding in. I was closing my eyes and clinging very tightly to my seat.

What an explosion this school greeted us!

"Are you all afraid?"

I opened my eyes again after hearing Sister Hannah's voice, then she returned to her true form. "Don't be afraid, open your eyes and try to look outside."

Trembling, I parted my hair covering my face, after that I obeyed Hannah's command. I slowly moved my head to the right and I was almost amazed at what I witnessed. I gasped as I examined the view outside. We were surrounded by a cloud, and when I peeked down. I saw the whole place of Maharlika, the place I came from.

"Woah," I muttered just in between my amazement. This is how beautiful the scenery in our area is. I also had a great view of Mount Mari, the mountain feared by the nobility. There are rumors that in this area the Hulit live, people with dark magic.

"Did you know that no one can see our vehicle?" the sudden entrance of Hannah while looking outside. She sighed before resuming her speech, "Because we are protecting you from the evil people who live on that mountain." She pointed to Mount Mari causing everyone to turn in that direction.

"W-why, what's going on in that place? I'm sorry for my question Sister Hannah, I'm from Ceari and we can't disclose events in other places until we enter the Academy, " asked a woman on the bus. I couldn't see her face much because she was in the front while I was in the back.

"I've already heard about your town --- but before I answer your question let me explain to you the places to be found on the island of ESTALLION."

•Maharlika: This is the largest and most developed area in the entire Estallion. Here live civilized people. The Maharlika was also the first to become a modern province. But here, you will also find a Mountain that most people fear, they called it Mount Mari. All those students who turn away from the Academy will end up here. They use all their power for evil purposes and to sow terror. One hundred years ago the Hulit invaded the Maharlika province to increase their powers but they did not succeed.

•PIRLAND: From this place come the most skillful physicians in the whole Estallion. There is also an academy within this area called "KIRST UNIVERSITY". This is the school for students who want to develop their medical skills. Apart from that, Pirland is also known as the place of great soothsayers.

•CEARI: The most hidden place of all. Those who do not belong to their race cannot enter. The leaders in this area are very strict. You can only enter if you have a letter in hand from Crypticus Academy and Kirst University. This area also features people who are good at using weapons.

•DOPILIO: The place of monsters and strange creatures. This whole province is closed for the reason that the monsters that live here are ferocious. Often, Dopilio is also the place where bad people are exiled.

•LERGUS: Lergus is known as the place of people who are good at making weapons. They created weapons used in war such as guns, bows, and swords. Their weapons are unique in the reason that you cannot handle a weapon that is not destined for you. They also send weapons to Crypticus Academy for students to use.

•MIRTA: This is the place where the first trade began. Mirta was also known for their land rich in gold and silver.

•KIAM-YU: Kiam-Yu is a sacred place. People throughout Estallion have beliefs that its inhabitants were gods in ancient times before they ascended to heaven. Today, Kiam-Yu province is just vacant land.

•HALEM: It is said that the Halem area is the source of four elements: water, nature, air, and fire. But a few thousand years ago the inhabitants here cracked causing their race to spread throughout Estallion. Today, halem is known only as a place for people who are good at using fire.

•ESTUI: Estui is the place of the nobility. It is a small province but its inhabitants are rich. This is also where the leaders of the Estallion live.

•GIE: Here is where the Crypticus Academy is located.