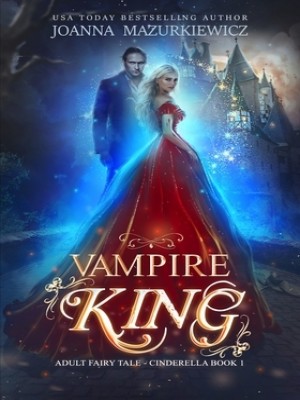 In a kingdom ruled by a vampire, royal blood doesn’t mean what it used to—and fairy tales don’t always have happy endings. To wrest her inheritance from her evil stepmother, Cindy must marry a respectable man before she turns 25. The upcoming royal ball is the perfect place to find one—with the help of a fairy godmother. Or at least, a drunken prostitute with some magical skills. At the ball, though, King Caspian sets his sights on her. It’s not like Cindy doesn’t know better—but surely no one’s more respectable than a king. So really, what does she have to lose? Everything, as it turns out. Because the king isn’t human at all, but a monster who’s hell-bent on having Cindy in his bed again. If only he can track her down. Scroll up and one-click this steamy, sexy, adult retelling of Cinderella with a vampire twist!

Cindy’s old pocket watch displayed twenty-five minutes until midnight. She’d been standing on the dirt road outside Lord Gerard’s large manor for about ten minutes now, wondering if she was doing the right thing. Her inner voice kept telling her that she was being silly, that perhaps the medals weren’t worth the hassle, but then memories from the past contradicted her voice of reason. Ida, Cindy’s stepmother, had been treating her worse than usual lately, and Cindy wasn’t sure what was causing it.

Cindy suspected that this change of attitude must have had something to do with her father’s will. Apparently, Ida’s counsellors were analysing it again, trying to find a way in order to cancel it out completely. Either way, Cindy didn’t care. Ida had no right to sell her dead father’s possessions—she was only her guardian. Everything, including the estate itself, still belonged to her, and would so permanently as soon as she fulfilled the clause in her father’s will.

The medals were priceless. Cindy’s father had gotten them from his great-great grandfather. He had often removed the medals carefully from their encasement, polished, and then just stared at them for hours. Cindy had never asked what they’d truly meant to him, but many memories of her father were in those precious items.

“Stop it, Cinderella. Gerard enjoys his drink far too much, and he will never realise someone was in his house,” she whispered to herself.

She needed to stop talking to herself and remember who she was. A lot of people in Farrington had begun rumours that she’d lost her mind entirely.

There were only three houses on this narrow path. Two elderly ladies occupied the others and were most likely sleeping at this hour, but Cindy couldn’t be certain if Gerard was alone in his home. She often heard rumours about him. People in town talked of how he liked rum, that he often drunk himself to an unconscious state until he passed out on the chair near the window.

A few minutes later, Cindy steeled her nerves and crept as silently as were possible around his estate. After she ensured none of the lamps were still burning, she decided to sneak inside through the back door. Her heart was thumping loudly inside her chest. If she were to get caught, she knew it would end badly, but those medals meant more to her than the anger of her stepmother on her worst day. Besides, she couldn’t allow Ida to get away with selling her father’s private collection. Ida was doing everything out of spite, just to make her life difficult, and Cindy wasn’t planning to sit idly by and obey her.

There was a forest behind the house, and Lord Gerard’s large garden was overgrown. Cindy suspected he must have stopped paying his gardener, too.

She was disappointed when she discovered that his back door was locked. This wasn’t the first time Cindy had to break into someone’s house. After her father died, she stopped being a respectable young woman and rebelled. She just couldn’t deal with the grief of losing her father, and things grew worse when she started keeping company with a group of highwaymen late in the evenings. Now she wished she could forget about that dark period of her life, but her stepmother was constantly there to remind her that she was the one who ruined her own future.

Cindy walked up to the smallest window; it was parted midway. She tried to open it, but after several minutes of struggle, she realised she’d bruised her hands. The old wood wouldn’t budge in the slightest, but she didn’t want to waste time looking for another way inside. She suspected that the drunken lord wouldn’t notice a broken window in the kitchen until tomorrow. After all, the entire manor was in disrepair.

After a few minutes of searching, she found a fallen grey stone from the fencing line and shattered the glass. At that point, Cindy was frustrated with her slow-going progress, and was running out of time. For several seconds, she just stood there, allowing her gaze to wander in the darkness, and waiting for someone to appear, but no one did. She wasn’t entirely sure if the lord was inside his home or not, but she was willing to take the risk. Minutes later, after removing the leftover shards of glass, she shimmied through the small window, finally inside. Cindy was slender so it worked to her advantage, but she’d torn the hem of her dress on the jagged windowpane.

Soon she found herself in a large kitchen that stunk of wet dog. There were dishes piled in the sink and bits of food on the floor. Cindy’s father had been a wealthy tradesman and they lived in a large estate that overlooked a small lake, but even from an early age, he’d taught her to always keep a tidy home. She suspected that Lord Gerard didn’t even have a maid. She noticed broken glass on the kitchen floor and sidestepped it as she walked through the narrow hall, passing the drawing room. She decided that this would be the first room to begin searching for her father’s medals.

Cindy was furious when she’d overheard Ida talking about her father’s possessions as if they were worth nothing. Her stepmother seemed so happy to have finally managed to rid herself of them—for a price, of course.

Cindy took a deep breath, walking into the spacious drawing room. Luckily for her, the room was empty. There was a plate filled with bits of meat and several bottles of rum on a small side table. It couldn’t have been too long since Gerard had gone to bed, or perhaps he hadn’t come home from the tavern at all. She needed to hurry, because she wasn’t entirely sure how much time she had. She started searching through his things, rummaging through the drawers inside of his bureau and looking through old papers inside another small wooden desk. Her hands were slightly trembling, but after several long minutes, she realised the medals weren’t anywhere in the room. Ida had sold them to Lord Gerard earlier on, so maybe he decided to put them away in a much safer place. The old lord must have realised they were worth more than the meager sum he’d paid.

A split second later, Cindy heard a noise coming from upstairs, and her heart nearly stopped inside her chest.

It seemed that Sir Gerard was indeed at home, and he had company. In the next moment, Cindy heard a feminine laugh. She began searching for the medals more frantically, telling herself she wasn’t going to leave without them, then headed to the dining room. She walked a few steps and then nearly tripped over what seemed like a package of some sort, lying on the wooden floor. When she looked down, she saw a paper bag. She opened it, peering inside.

“That common thief,” she whispered to herself, finding her father’s precious medals. He must have gotten rid of the boxes and then tossed the medals in a paper bag. That made Cindy even more furious; the boxes were handcrafted, and they were probably worth more than the medals themselves.

“Stop it, sir, that hurts.” The woman’s voice echoed throughout the house once again. She placed the bag inside the pocket of her long dress and then headed upstairs. She knew it was a bad idea, but her curiosity won out. Lord Gerard lived in an old-style Manor home with several bedrooms; the floors were squeaky, and she had to walk on her tiptoes. There were several empty bottles of spirits scattered around the landing and stairs.

She peered through the door of the last bedroom on the second floor. She recognised Gerard’s company. She was a local woman from the nearby brothel. The lord had her pinned down on a large wooden bed. Cindy bit her bottom lip. She knew women like that were used to pleasing men, and in the end, it was their job, but right then, something felt a little off about this particular situation.

What the lord enjoyed doing in his spare time was none of her business. She’d retrieved the medals—what she’d come for. She was just about to leave when she saw Lord Gerard strike the woman. Cindy gasped, and the girl cried out in pain, trying to wiggle herself out from beneath him. A second later, he began forcing himself on her, breathing hard, trying to untie his belt at the same time.

“You’re such a naughty, naughty whore,” he rasped, and then clasped her hands above her head so she couldn’t move. Her cheek was red, raw, and Cindy was horrified. The lord was slurring his words, too. Cindy supposed he must have been drinking heavily before the girl showed up.

“This is not what you’re paying me for. Let me go. You’re hurting me, sir!” the woman shouted, and Cindy could hear the panic in her voice.

“Shut your mouth, you stupid whore! I’ve been paying Martha a fortune for your lot, so it’s about time you do what I want,” he snarled and hit her again, then began moulding her breasts in his hands. The woman was pleading with him to stop, but he refused to listen to her at all.

Cindy stood there watching them, frozen to the spot. She also knew that this wasn’t the first time: Lord Gerard often took advantage of the young ladies in the Farrington Kingdom. She never knew he was willing to pay for Martha’s services, too. She was fuming with anger, remembering when one of the highwaymen had forced himself upon her in the forest. The rage inside of her spiked, and in that moment, she lost control of herself.

“Gerard, I think you have something on your face,” Cindy said, walking inside the bedroom and making her presence known. Lord Gerard was too drunk and most likely too aroused to gather himself in time. Cindy didn’t think, she just punched him hard, directly between his eyes, hearing his bones crunch in the process. The lord howled and blood poured down his face. For a second, she was blinded by the pain in her fist, also, she was shocked by her own unexpected strength. The woman managed to wiggle herself from underneath the lord’s large stomach and then screamed. This wasn’t the reaction Cindy had expected from her.