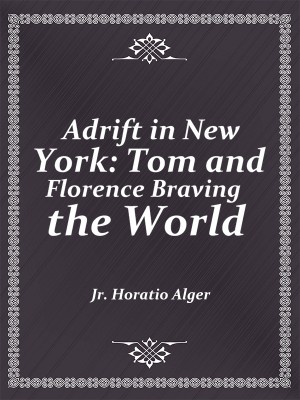 Adrift in New York: Tom and Florence Braving the World

"Uncle, you are not looking well to-night." "I'm not well, Florence. I sometimes doubt if I shall ever be any better." "Surely, uncle, you cannot mean----" "Yes, my child, I have reason to believe that I am nearing the end."

"Uncle, you are not looking well to-night."

"I'm not well, Florence. I sometimes doubt if I shall ever be anybetter."

"Yes, my child, I have reason to believe that I am nearing the end."

"I cannot bear to hear you speak so, uncle," said Florence Linden, inirrepressible agitation. "You are not an old man. You are butfifty-four."

"True, Florence, but it is not years only that make a man old. Twogreat sorrows have embittered my life. First, the death of my dearlybeloved wife, and next, the loss of my boy, Harvey."

"It is long since I have heard you refer to my cousin's loss. Ithought you had become reconciled--no, I do not mean that,--I thoughtyour regret might be less poignant."

"I have not permitted myself to speak of it, but I have never ceasedto think of it day and night."

"If he had died, I might, as you say, have become reconciled; but hewas abducted at the age of four by a revengeful servant whom I haddischarged from my employment. Heaven knows whether he is living ordead, but it is impressed upon my mind that he still lives, it may bein misery, it may be as a criminal, while I, his unhappy father, liveon in luxury which I cannot enjoy, with no one to care for me----"

Florence Linden sank impulsively on her knees beside her uncle'schair.

"Don't say that, uncle," she pleaded. "You know that I love you, UncleJohn."

There was a shade of jealousy in the voice of Curtis Waring as heentered the library through the open door, and approaching his uncle,pressed his hand.

He was a tall, dark-complexioned man, of perhaps thirty-five, withshifty, black eyes and thin lips, shaded by a dark mustache. It wasnot a face to trust.

Even when he smiled the expression of his face did not soften. Yet hecould moderate his voice so as to express tenderness and sympathy.

He was the son of an elder sister of Mr. Linden, while Florence wasthe daughter of a younger brother.

Both were orphans, and both formed a part of Mr. Linden's household,and owed everything to his bounty.

Curtis was supposed to be in some business downtown; but he received aliberal allowance from his uncle, and often drew upon him for outsideassistance.

As he stood with his uncle's hand in his, he was necessarily broughtnear Florence, who instinctively drew a little away, with a slightshudder indicating repugnance.

Slight as it was, Curtis detected it, and his face darkened.

John Linden looked from one to the other. "Yes," he said, "I must notforget that I have a nephew and a niece. You are both dear to me, butno one can take the place of the boy I have lost."

"But it is so long ago, uncle," said Curtis. "It must be fourteenyears."

"It is fourteen years."

"And the boy is long since dead!"

"No, no!" said John Linden, vehemently. "I do not, I will not, believeit. He still lives, and I live only in the hope of one day claspinghim in my arms."

"That is very improbable, uncle," said Curtis, in a tone of annoyance."There isn't one chance in a hundred that my cousin still lives. Thegrave has closed over him long since. The sooner you make up your mindto accept the inevitable the better."

The drawn features of the old man showed that the words had adepressing effect upon his mind, but Florence interrupted her cousinwith an indignant protest.

"How can you speak so, Curtis?" she exclaimed. "Leave Uncle John thehope that he has so long cherished. I have a presentiment that Harveystill lives."

"You, too, believe it possible, Florence?" he said, eagerly.

"Yes, uncle. I not only believe it possible, but probable. How oldwould Harvey be if he still lived?"

"Eighteen--nearly a year older than yourself."

"How strange! I always think of him as a little boy."

"And I, too, Florence. He rises before me in his little velvet suit,as he was when I last saw him, with his sweet, boyish face, in whichhis mother's looks were reflected."

"Yet, if still living," interrupted Curtis, harshly, "he is a roughstreet boy, perchance serving his time at Blackwell's Island, and, ahardened young ruffian, whom it would be bitter mortification torecognize as your son."

"That's the sorrowful part of it," said his uncle, in a voice ofanguish. "That is what I most dread."

"Then, since even if he were living you would not care to recognizehim, why not cease to think of him, or else regard him as dead?"

"Curtis Waring, have you no heart?" demanded Florence, indignantly.

"I know nothing of it," said Florence, coldly, rising from herrecumbent position, and drawing aloof from Curtis.

"You know that the dearest wish of my heart is to find favor in youreyes. Uncle, you know my wish, and approve of it, do you not?"

"Yes, Curtis; you and Florence are equally dear to me, and it is myhope that you may be united. In that case, there will be no divisionof my fortune. It will be left to you jointly."

"Believe me, sir," said Curtis, with faltering voice, feigning anemotion which he did not feel, "believe me, that I fully appreciateyour goodness. I am sure Florence joins with me----"

"Florence can speak for herself," said his cousin, coldly. "My uncleneeds no assurance from me. He is always kind, and I am alwaysgrateful."

"I do not doubt your affection," he said; "and I have shown it bymaking you my joint heirs in the event of your marriage; but it isonly fair to say that my property goes to my boy, if he still lives."

"But, sir," protested Curtis, "is not that likely to createunnecessary trouble? It can never be known, and meanwhile----"

"You and Florence will hold the property in trust."

"Have you so specified in your will?" asked Curtis.

"I have made two wills. Both are in yonder secretary. By the first theproperty is bequeathed to you and Florence. By the second and later,it goes to my lost boy in the event of his recovery. Of course, youand Florence are not forgotten, but the bulk of the property goes toHarvey."

"I sincerely wish the boy might be restored to you," said Curtis; buthis tone belied his words. "Believe me, the loss of the property wouldaffect me little, if you could be made happy by realizing your warmestdesire; but, uncle, I think it only the part of a friend to point outto you, as I have already done, the baselessness of any suchexpectation."

"It may be as you say, Curtis," said his uncle, with a sigh. "If Iwere thoroughly convinced of it, I would destroy the later will, andleave my property absolutely to you and Florence."

Curtis, screened from his uncle's view, darted a glance of bitterindignation at Florence.

"Is the girl mad?" he muttered to himself. "Must she forever balk me?"

"Let it be so for the present, then," said Mr. Linden, wearily."Curtis, will you ring the bell? I am tired, and shall retire to mycouch early."

"It is too much for your strength, my child. I am growing more andmore helpless."

John Linden, supported on either side by his nephew and niece, leftthe room, and was assisted to his chamber.

Curtis and Florence returned to the library.

"Florence," said her cousin, "my uncle's intentions, as expressedto-night, make it desirable that there should be an understandingbetween us. Take a seat beside me"--leading her to a sofa--"and letus talk this matter over."

With a gesture of repulsion Florence declined the proffered seat, andremained standing.

"As you please," she answered, coldly.

"Will you be seated?"

"No; our interview will be brief."

"Then I will come to the point. Uncle John wishes to see us united."

"It can never be!" said Florence, decidedly.

Curtis bit his lip in mortification, for her tone was cold andscornful.

Mingled with this mortification was genuine regret, for, so far as hewas capable of loving any one, he loved his fair young cousin.

"You profess to love Uncle John, and yet you would disappoint hischerished hope!" he returned.

"Is it his cherished hope?"

"There is no doubt about it. He has spoken to me more than once on thesubject. Feeling that his end is near, he wishes to leave you incharge of a protector."

"I can protect myself," said Florence, proudly.

"You think so. You do not consider the hapless lot of a penniless girlin a cold and selfish world."

"Penniless?" repeated Florence, in an accent of surprise.

"Yes, penniless. Our uncle's bequest to you is conditional upon youracceptance of my hand."

"Has he said this?" asked Florence, sinking into an armchair, with ahelpless look.

"He has told me so more than once," returned Curtis, smoothly. "Youdon't know how near to his heart this marriage is. I know what youwould say: If the property comes to me I could come to yourassistance, but I am expressly prohibited from doing so. I havepleaded with my uncle in your behalf, but in vain."

Florence was too clear-sighted not to penetrate his falsehood.

"If my uncle's heart is hardened against me," she said, "I shall betoo wise to turn to you. I am to understand, then, that my choice liesbetween poverty and a union with you?"

"You have stated it correctly, Florence."

"Then," said Florence, arising, "I will not hesitate. I shrink frompoverty, for I have been reared in luxury, but I will sooner live ina hovel--"

"Or a tenement house," interjected Curtis, with a sneer.

"Yes, or a tenement house, than become the wife of one I loathe."

She did not reply, but, pale and sorrowful, glided from the room toweep bitter tears in the seclusion of her chamber.