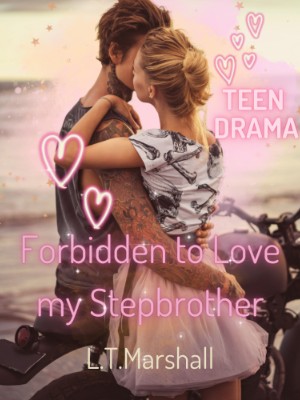 Forbidden To Love My Stepbrother

Kayla is a smart, focused, top-mark student, who has dreamt of being an independent and successful vet. However, her life gets chaos and drama, after her stepbrother comes to live under the same roof. Dane is the polar opposite in every way - Vain, oversexed, a playboy who takes nothing seriously except booze, girls, and his motorbike while he rebels in every way against his father for ripping apart his family. At 17, they have known one another most of their lives and never had any kind of friendly relationship. They have always been classmates but never friends and definitely not siblings. But all that is about to change. A series of events pulls them closer, a forbidden and unexpected accidental kiss, and they plummet into confusion as feelings grow that neither expected.

"What do you want, Dane?" I shove his overly heavy arm from my shoulder and elbow him in the ribs to get him off me. I can't stand his lounging on me casually like I'm another one of his endless girlfriends.

"Can't I walk my sister into school without being accused of ulterior motives?" He smirks down at me from his much taller height, too close for comfort, all bright white teeth, great bone structure, and grey eyes that seem to drive the hormonal teens here crazy. It grinds my eternal gears with irritation.

"For one, I'm only your sister when you want something. Two … you always have a motive when you are being nice to me." I point out, shrug off his second attempt at slinging an arm around me and bat him with my schoolbag instead. Not caring if I injure him in any way. I’d rather not have him near me on any given day of the week.

"Kayla, honey….sweetest little step-sibling of mine. You are my favorite sister and always have been. How can you be so untrusting?" he smirks, that devilish side on show.

"I'm your only sister… only step-sibling. Therefore, that doesn't mean anything. I wouldn’t trust you as far as I could throw you, and with your weight, that wouldn’t be far at all." I walk faster to outrun him, annoyed that other students are starting to notice their godlike leader has appeared and his fan club of moping girls are waving this way. Eyes on us – prying, gossiping.

The one thing I hate about high school is the non-original behavior and cliché groups of kids like this who flock to a handsome face and good body and treat him them a superstar for winning the gene lottery. It’s sad that even in 2022, we still value people on how good-looking they are.

"Kayla…. baby. Don't make me pull out the big guns." Dane catches me by the back of my shoulders in a strong grip, bringing me to a sudden halt, and spins me so fast I almost topple over and end up nose butting him in the center of his overly amped up chest from too much gym time. It feels like I get my face splatted against brick, and my eyes water over with the sudden stinging pain it causes.

"Ouch!" I snap in irritation, shoving him hard in the abs to make him move back, shaking him off my shoulders to rub my face, and glaring at him with fury beginning to grow. An internal brewing storm of anger because normally, I prefer my mornings to be Dane-free.

"What is it? What now? Spit it out and leave me alone before kids actually think we like each other. I know you want something, as it’s the only time you bother acknowledging my existence!" I stomp at him and fix my bag and blazer, smoothing out clothes to avoid the way he's eyeing me up in that practiced playboy manner he has. He's in full seduction mode, the charm and smiles for my benefit are fake, and he has a request I will refuse.

He straightens up, pats me on both shoulders, then brushes imaginary dust off my lapel before fixing a smile on his face and tilting his head to look cute. My stomach tightens with rage, and I narrow my eyes further. I’m no stranger to his tactics. I see him use them all day long on his line of playthings.

"Add my name to your project notes. So I don't fail another class. I'll grant you any wish you desire, my sweet little munchkin…. and I won’t tell anyone you’re still a virgin." He beams full charm offensive, that last insult thrown in because he can never truly veer from being an asshole, yet I scowl back.

It may be true, but I hate that he always uses it as a weapon whenever his charms fail.

"No… you were supposed to help in the group project you were in. You didn't. You slack off, do nothing, and expect credit for a grade you don't even care about. No…No…NO! Take your threats and go away. I don’t care. It’s nothing to be ashamed of, even at seventeen." I push him away, turn fast, so my hair flicks him in the neck, and move to storm off, but he lassoes me from behind in a headlock and hauls me back against a hard body, trapping me and nearly choking me at the same time.

"Koolaboo….. little sis… pure untouched goodness and light….. Dad says if I don't pull my grades up, he will pack me off to live with my mom in London to go to some stuffy private school. You'd miss me."

"No, I wouldn't." I wriggle to escape him to no avail. Getting flustered and wrinkled and despising him all the more.

Dane sighs, tucking his head against my cheek from behind forcefully and cuddling up annoyingly so that he has a few heads turning our way in confusion. I can’t ever fight him off when he gets handsy, given he’s over six feet of pure muscle, and I am barely clearing five foot four of not much body fat. Everyone knows Dane and I are always at one another's throats, so this show of affection is strange.

I'm even weirded out by being trapped in his biceps and suffocated with whatever shower gel, aftershave combo he uses. It's not bad. It's one of those smells that makes you forget how to think properly and clings to your senses after he walks off. I swear this boy's entire style, persona, and manner is a practiced tick list of how to be the school hot boy, making my skin crawl. We couldn't be any more different if we tried.

"Let me go.” I squirm and fight, but his limbs only tighten, and I become almost immobile. “People are staring."

"Say yes or I'll keep us like this all the way into class and maybe even amp it up some more. I'm not against sitting you in my lap. It’s about time I declared my love for my sister and showed her so much more affection."

"I hate you," I grit through my teeth, shuffling forward awkwardly with this dead weight on my back as he does not attempt to walk properly and cannot get free. “I swear, Dane, I will suffocate you in your sleep if you do not let me go. My room is right next to yours. I know how to get in without waking you.” No amount of wriggling, struggling, and jerking loosen his octopus limbs.

“I’m into that, but I never took you for a kinky one, Lil sis.” He bumps my butt with his groin, and I yelp in disgust and attempt a stamp at his foot, but he’s too quick for me.

I hear the smirking breathy chuckle, which is almost his trademark nowadays, and can envision a smug look even if I cannot see it.

"It's just adding one name… won't affect your grade or anyone else's. It will get dad off my back and less drama with your mom….we both know you hate drama at home." He croons, all husky-voiced, deep, and I know this is his baby way of swooning all the braindead girls he has his claws in. He is attempting to sway me, but he is right about stress at home.

Him and my mom butting heads twenty-four seven since he moved in five months ago has made home tense and a horrible place to be when they are together. His dad has zero control over him and lets him do whatever he wants, while my mum is an endless nag. His dad is overcompensating for divorcing his mother, and my mom hates everything about how he has been raised. Everything about how he talks, walks, dresses, behaves, lives…. you name it, and my mom will find fault in him. Home used to be my haven; now, I feel like it’s become a battle zone, which is partly why I cannot stand him.

"For god's sake. Will you go away and leave me alone for the next two years if I say yes? Let me graduate without crossing paths again, and let me have a quiet life?"

There’s a pause as he considers it, and then he loosens a little.

That little thrown-in ‘nickname’ he has for me irks me and riles my already frayed temper. Being a virgin is not a sin or a crime and nothing to be ashamed of. He wouldn’t know, though, as he sleeps with everything that shows interest and only hangs out with girls who bang everyone too.

"You know, if you stopped screwing around and did the actual work, you wouldn't need to blackmail me and piggyback my grades whenever there's a group project. You're not stupid… your grades used to be better than mine. You just spend too much time looking in the mirror and dating brainless women." My tone is harsh and a little too loud for such a quiet morning in our school walkway, but he knows how to push my buttons.

He finally releases me, and I spin on him, shoving him hard in the chest, but it does nothing. Not even a step back, all I get is that side smirk and wink as he brushes his hair out of his eye and lounges casually once more.

"And lose my excuse to cuddle up with my favorite girl? Hell no…. torturing you is my only joy in life. Anyway, why would I want to do a stupid thing like make my dad proud?" He shrugs with one shoulder and swings his backpack from one side to the other in a suave move that has the nearby coven of watchers swooning and probably dampening their panties. I eyeroll and turn on my heel to walk away from him. So done with this conversation and seething that yet again, I caved and agreed to something for this idiot just for a peaceful life. I hate that he knows how to get at me.

"Your rebellion is getting old and boring. It's been almost a decade, and you are still trying to disappoint him as punishment for marrying my mom…. Grow up. Some of us moved on." I sneer, angrily fixing my clothes, and brush my blonde flyaway tendrils of hair back into my messy bun on the top of my head.

"What’s the point in trying when he has my whole life mapped out anyway… my grades mean shit when my entire existence is set in stone, and my future is to sit in a chair for a company I don’t even care about?” It’s a sulky, sarcastic tone that drifts after me as he stops mid-walk. I carry on to get to class, casting him back a glance with a sigh, taking in the tall, athletic stance of a high schooler who met hormones earlier than most. Mixed with the good bone structure, great DNA, and a resemblance to his mom.