Home/ At Your Service Completed 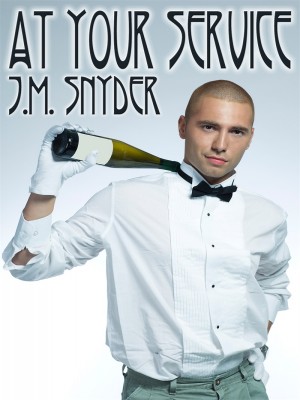 Danny's friend Jen is always trying to play match-maker, looking for the perfect guy for him. When they stop at a restaurant for an early dinner, she decides their waiter Todd is "The One." He's sexy, cute, flirty ... and obviously interested in Danny.<br><br>Jen conspires with another employee to get the waiter's number, determined to hook Todd up with her friend.<br><br>Danny doesn't know whether to be grateful for her help, or mortified at the lengths she'll go to just to get him a date.

Jen drives like she’s looking to hurt someone, but I haven’t decided yet if it’s herself or me she’s trying to kill today. She’s off from work and because her boyfriend Greg isn’t, she called and asked if I’d take her to the movies, though we both paid our own way and she drove.

But sure, why not?

We caught a late matinee, one of those shows that starts a few minutes before six so we only had to pay the cheaper afternoon price. Now we’re cruising down the boulevard, looking for a place to eat, because she’s hungry and she’s got some money left to burn.

I point to Taco Bell. “How about there?”

In all honesty, I don’t care where we eat; I just want her to stop the car. I’m already thinking I’m going to ask if I can drive home, just to make sure we get there in one piece. How she ever got a driver’s license, I’ll never know.

But she shakes her head. “Something that isn’t fast food.”

Though there are a dozen restaurants that fit that description up and down this whole street, she can’t seem to find one she likes. When the light in front of us turns red, she hits the gas and shoots through the intersection while the other cars around us slide to a stop.

I check my seat belt to make sure it’s secure. It’s not going anywhere—I only checked it five minutes ago.

Jen keeps her gaze ahead, as if she’s really concentrating on the road. “You need to get out every now and then, Danny, if you think Taco Hell is eating out.”

I stifle a groan. Here it comes, her ‘you need to find someone’ speech.

Before she can launch into why she’s so damn happy with Greg and how she worries about me because I don’t have anyone like that in my life, I point out the sign for TGI Fridays up ahead. “There’s a place to eat.” I see her frown, unsure, and I sigh. “Jen, I’m starving.Do we have enough money left over for Fridays?”

“I got money.” She’s wavering and a few seconds more we’ll be past the restaurant. “Not much—”

Too late, I realize I shouldn’t have said that. Without so much as a glance in the rearview mirror, she yanks the steering wheel hard to the right, throwing us across three lanes of traffic to glide into the turning lane, so fast I’m sure we take the corner on two wheels. She flashes her sweet smile at the drivers who lay on their horns as we pull into the parking lot. “Damn assholes,” she mutters, slamming on the brakes into the first empty spot she finds. I’m not even sure it’s a legit parking space—yellow lines run through it—but right now I don’t care. “They give anyone a license nowadays, don’t they?”

They gave you one.At least the car’s finally stopped. When she turns off the engine, I jump out so she doesn’t see my hands shake. I’m definitelydriving home.

Even though it’s Saturday, it’s still early enough that we’re seated as soon as we walk into the restaurant, and when I slide into the booth across from her, she starts up where she left off back in the car. She looks at the menu like she’s going to order up a boy, made special just for me. “You really need someone, Danny.”

Make him cute, that’s all I ask. With a body to die for and eyes that shine like stars, and while we’re at it, make him madly in love with me. That’s what I want. Is that asking too much?

I don’t think so, but then again, I haven’t dated anyone in a long time so maybe I’m too picky. It’s that madly in love part I stumble over every time. I’ve met guys I like and guys who like me, but they all seem to be looking for nothing more than a good time and a few kisses, a grope in the back seat of the car, maybe a quick fuck. That’s notwhat I want. Is it too much to ask for someone who will still be there the morning after? Someone who wants more than a warm body, someone who wants me? Specificallyme?

I glance over the appetizers. “I don’t need anyone,” I lie. “What do you feel like eating?”

She shrugs. “I don’t know. You’re trying to change the subject.”

“I am.” I don’t want to talk about how alone I am, or how I stay awake some nights and ache for someone to hold me. She has Greg, and the three of us are best friends but she doesn’t need to know thatmuch about me. “You think we should go for the potato skins?”

Without looking up, I see her mouth pull into a tight little bow of consternation, and I add, “Don’t start with me, Jen. I’m not in the mood to argue with you about guys. I barely got here alive—”

“Hey!” she cries, indignant, as our waiter approaches the table. He’s around my age, with dark hair and a bored expression in his eyes that says he’d rather be anywhere but here. His nametag reads Evan.Barely glancing at him, Jen says, “We’re not ready yet.”

He turns and walks away without another word. “Nice guy,” I mutter. “Do you think it would look bad if we move to another table?”

Jen laughs. “Stop it. Find something to eat.”

The waiter comes back a few minutes later, glaring at us as if he thought we were going to leave and he’s mad we didn’t. With a sigh, he sets out silverware. “I’ll be your waiter tonight. My name is—”

“Todd,” someone behind him says.