Home/ Out-standing Modern Sodier Ongoing
He used to be the feared Soldier King, but he disappeared in the conspiracy and came back many years later! 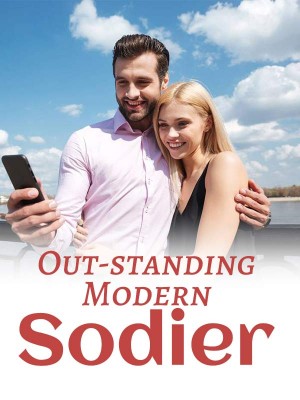 The strongest military king left the army with hatred. When he returned again, he was treated as a rogue who flirted with women. "Let's see how he will look down on all the heroes. He will start from scratch and start a different legend!"

"Beauty, I find that you are carrying a "th acquire" sign..."

Su Hang's eyes were closely fixed on the tall beauty who was ten centimeters away. Her skin was as white as if she had been injected with a needle. The well-wrapped hip-wrapped skirt with sexiness made people feel more excited.

Especially the two towering peaks in front of his chest. Any man who saw them could not help but want to climb up.

"Who do you think has a sign of murder?" The beauty's blood was surging under Su Hang's "hot" gaze.

She looked like she was going to kill someone.

Su Hang did not show the slightest fear of being threatened. Instead, he calmly turned his eyes again to the beautiful woman's towering chest and continued shamelessly, "Of course, it's you! It's fate that we meet each other. It's better to find a channel to talk about life and ideals. By the way, I'll help you to figure out how to remove this bra. No, it's a sign of big breasts!"

This man kept harassing her from the plane. If it weren't for her identity as a public figure, she really wanted to slap him.

"If you dare to follow me again, I will throw you into the river to feed the fish!" The beautiful woman's cold warning made Su Hang feel a different flavor.

He liked this kind of cool and hot girl the most.

However, the next second, he felt a pain in his abdomen.

The beauty bent her right leg and hit him hard in the stomach.

At the moment when he fell to the ground, he seemed to have seen the bottomless and tempting scenery inside.

Watching the beautiful woman leave like a proud swan, Su Hang came to his senses and gasped in pain.

"Damn it, it's really frosty this time. Fortunately, you didn't beat my brother, or I'll teach you how to be a woman!"

Su Hang couldn't help but open his mouth, and it was obvious that he didn't want to give up.

After leaving the airport, Su Hang saw the iceberg beauty get into a Rolls-Royce Phantom. This kind of car, without seven million dollars, could not be taken down at all.

Tsk, tsk. No wonder her knees were so hard. It turned out that she had a strong background.

"However, be careful next time you don't meet me again."

Su Hang patted his ass, stood up, and there was no pain on his face.

He stopped a taxi and got in. "Master, go to the Bikang Pharmaceutical Industry!"

However, when the taxi was halfway through, Su Hang found that something was wrong.

How could the Rolls-Royce in front of him be in the same direction as him?

Was the iceberg beauty also serving in the company of the Kang Group?

Before Su Hang had any doubts, the Rolls-Royce suddenly accelerated and disappeared from his sight—

Su Hang let go of his doubts and thought, "Maybe the roads to the downtown area are almost the same."

Twenty minutes later, the car stopped in front of the square of Bikang Pharmaceutical Industry.

Looking at the 100-story building, Su Hang couldn't help but exclaim that it was really good to have money.

He took out his mobile phone and dialed a number of more than 20 yuan.

"I'm here. What's the task?" As soon as the phone was connected, Su Hang asked discontentedly.

With his current status, it would not be easy for him to get out of the mountain.

If he hadn't promised the man on the phone, he would never return to China.

What made him even more confused was that this task was free, and he could not get any reward.

"As expected, you are still that Su Hang. I didn't see the wrong person..."

"All right, don't pretend to be familiar with me here. I didn't tell you before. After helping me this time, we'll be even in the future." Su Hang took a sip of cold water and said angrily, "Don't waste your time. What's the matter?"

"Help me solve a personal problem for a friend."

"Can you say no more? Who is it?" After Su Hang finished smoking the last cigarette, he saw a beautiful woman passing by, so he blew his face at her.

He threw the cigarette butt into the trash can, which was about ten meters away from him.

The words that the beauty wanted to swear at the rogue were stuck in her throat, and she was shocked directly!

Because that was a trash can ten meters away, and it was still a dry trash can with accurate accuracy!

"The chairman of Bikang Pharmaceutical Industry. No, it's his daughter, Lin Xuehan."

"Lin Xuehan published a paper on the impurities of Nature two months ago, causing a sensation at home and abroad."

"The straight-A student?" Su Hang knew that if it was really a simple thesis, he would never ask for his own help. "What thesis?"

"It's a matter of how to use magnetic means to mix the Misawairata in micro-worlds!"

Su Hang was stunned. "This is the main composition of mentally ill medicine. It's very expensive."

"That's right. But the problem lies in that this kind of Misawa Z Lun can be transformed into the main ingredient of 'X-one's' after a simple chemical combination." The voice of the person opposite suddenly became heavy.

"That's right, but this combination method is much simpler than those in Europe and the United States. The cost is reduced by at least five times, so the international underground drug is now looking covetously at this thing... Lin Sheng State also realized that this thing had brought great danger to his daughter, so he asked me to help him. I used to be his friend, so..."

"Do you know Lin Xuehan herself?" Su Hang interrupted.

"She doesn't know that." The other side said with embarrassment.

"A young lady like her, who has been living in the ivory tower for a long time, really doesn't know. I guess she's still complacent about her own achievements." Su Hang sneered. Suddenly, he changed the subject. "You should know how long this deadline is. I'm busy."

"Ah? Ahem, ahem, I don't know the specific date." The man on the other side cleared his throat awkwardly.

"You didn't tell me until now?" Su Hang was speechless.

"Didn't I tell you earlier that I was afraid that you wouldn't come?"

You made a good point, but he didn't know what to say.

Su Hang couldn't wait to turn around and leave, but when he thought of promising others that he would leave, it was a betrayal of the faith. He was so angry that he couldn't vent his anger.

This Lin Xuehan was really tired. Why did she write this kind of thesis? Not only did she make a lot of troubles, but she also made herself become so passive.

"Sir, is there anything I can help you with?"

As soon as Su Hang walked to the hall, he was stopped by a beautiful little sister.

"Lin Shengguo, this name is so familiar..." The girl at the front desk muttered in confusion. Suddenly, she seemed to think of something and exclaimed, "Chairman?"

It was no wonder they didn't know that these ordinary employees usually didn't dare to call the chairman's name.

"Yes, it's your chairman. Tell him to come down quickly. I'm in a hurry." Su Hang said all the way, and his throat was smoking. He just wanted to find a beautiful sister to moisten his throat.

"Er, what's your surname, sir?" The girl at the front desk wanted to roll her eyes at his rampant behavior, but as the leader of the Bikang Group, she still asked with a good temper.

The girl at the front desk hurriedly looked through the schedule, but found that no one surnamed Su had an appointment.

"I'm sorry. The chairman's schedule has been arranged. If you don't make an appointment, please go out." The girl at the front desk had completely lost her face. She raised her hand and was about to drive him away.

"Ha—" Su Hang was so angry that he spat out blood when he saw that the girl at the front desk was so dedicated. He even felt that he was down-to-earth, so he had to lower his voice to do him a favor.

Come on, let's settle this matter as soon as possible. We can't waste any more time here.

"To tell you the truth, in fact... I am the son-in-law of your chairman. I also want to keep a low profile, but my strength is not allowed. Alas, can you let me in now?"

"Ah? The husband of the president? How... how could it be possible?" The girl at the front desk was stunned.

He couldn't help but look at Su Hang up and down. He was wearing a casual T-shirt. Although he had a good figure, he looked like a swindler who needed to be beaten up.

What's more, Lin Xuehan was the most beautiful woman in the business world. It was said that she was chased by tens of millions of young masters. She didn't even spare a glance at them. How could she fall in love with the ruffian in front of her?

"Really? Who have you said that you've been in love with for a long time?" A cold voice sounded behind him.

Su Hang felt that the voice was a little familiar, and then he found that the face of the girl at the front desk suddenly turned pale.

Turning around, he found that it turned out to be the beautiful woman with a big chest!

However, when Su Hang thought of the slap on his knee in the morning, he was very angry and said, "You are a dead man. How dare you follow me? What's more, who is better than me has nothing to do with you? I see that your glabella is black. It's a bad sign. No matter how beautiful you are, there is no man who wants it!"