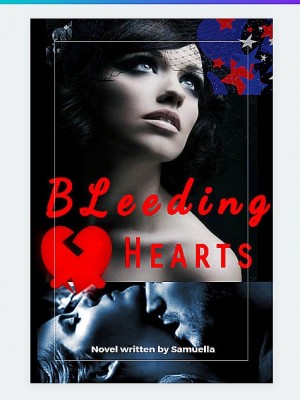 Flora Bass is a young beautiful and high class lady in her early twenties. Happy that she finally has what her parents shared and she has longed for, for a long period of time, which is love. Meeting James was like a blessing to her until it all turned sour when he left her just few months into their marriage. Broken and shattered, she vows not to give her heart to anyone again. She holds firm to this, till she encounters Ray Bid. Ray tries so many turns to try and convince Flora to believe in love again. Did he succeed and mend Flora’s Bleeding Hearts?

She just received a call from her mum informing her about the stay-at-home order. She despised thinking that the outbreak of this so-called disease is the most dreadful and saddest news she had ever heard.

Her wedding ceremony was just next week Saturday and now what, a restraining order. She stood up from her bed and made a move to her dressing mirror. She stood there for some time and pushed the chair forward to key into the locker. She walked to her sitting room and recollected something and went back to the room. She needed to inform Techna about the postponement of her wedding ceremony. She dialled her number

“Oh, just stop it already, will you?"Flora cut her angrily

“The wedding has been postponed because of the outbreak of the viral infection, no P, we’ll manage. Should I come over …” Techna said robotics

“Where did I meet you? Or “she was cut short

“Alright, could you please just stop that, I know you are expecting me to ask you what you just discovered with your language and talking styles presently. So what have you?” Flora asked

“Finally, I just finished making an air-fly, flying around Angeles, look behind you” Flora looked behind her to see a little plane at her transparent window. “Um, Techna, is this a little plane or what?” She asked confused

“Uh, don’t you dare abuse the power of technology. I call it ‘The Air-fly’ dan dan dan dan” She made a beat with her mouth with excitement.

“Oh crackers, I don’t mind you moving over but first, let me meet you at your house junction so you keep packing until I get there I want us to go to James house together”.

“Noooo problem” she said stressing the ‘o’ “see you then” she hanged up.

She stood up and went to her room to change her dress. She took her car key and went to the garage. She drove silently along the street, she thought of putting on the stereo but she declined from the idea.

Minutes later she saw Techna on the road and was amazed with what she saw. “What the hell?” she said silently as she drove closer to her.

“Hi, Flower, how are your plants coping?”Techna greeted her, waving

“Come on, the holidays might take forever so I don’t wanna stop working, you understand"

"No I don't understand, cause I don’t know where you are going to put all of this." Flora repeated the gesture.

“Relax” she brought out a remote from her purse and pressed a button, all the boxes disappeared except the one on her hands.

“Whaaat!!!?, oh common why should I be surprised no one should ever be surprised at you starting from your name, Techna”.

“And that’s why I’m special” she moved her body and closed her eyes revealing a smug face. She got into the car and Flora drove on to James' house.

When they got to James’ house, Flora parked her car in his garage. She and Techna got down from the car and walked towards his door. Flora pressed the door bell “Ding Dong”, the sound from inside could be heard outside. James came out and saw Flora

“Baby, you didn’t tell me you were coming over” He got out from the house and gave her a hug then he kissed her

“Do you guys mind? Someone else is here” Techna said with a disgust look on her face

“O, we’re sorry. But I already told you times without number to move out and look for your mate” Flora said as she dragged James into the house

“I just wanted to surprise you, that why I came over dear” She settled herself over one of his sofa as Techna went to seat in the dinning room.

James was the type who likes it when all his things are neat. You could not see a thing out of place. His sitting room was all manly with dark blue. She has told he so many times to add a little life to his house but he refused and said when they got married, she is going to do it all, but she still liked his house the way it is.

“That’s so sweet of you thank you. Miss Techna good to see you and sorry for making you uncomfortable. Though if its left to me I would go with my girl’s advise.” He said as he joined Flora on her sofa.

“Well, what’s with the mood”

“What about it?” He asked brushing her hair

She jolted her head up to face him “Haven’t you heard about the restraining order?”

“ummmm, up till now have heard nothing about it. What’s it about it?”

“The thing is we’ve got to postpone our wedding. All public gathering aren’t allowed.”

“Damn, that’s so not goodnews. Are you sure you are alright?” He asked as he raised her to sit on his lap.

“I’m alright as long as I have you” She said as she kissed him.

“Exactly, we have each another so we can conquer whatever comes our way. As long as I have you” He said as he kissed her back softly. They continue kissing until James carried her up and said he said in a husksy voice

“No problem” She replied “Techna, feel free, you can perform whatever just don’t blow up the house alright?”

“No problem about that, you guys can take your time. I’ll keep myself busy over here.” Techna replied without coming out as she had already started her unfinished business.

“Alright then.” They both moved upstairs to James’ room. As soon as they got to the room James dropped her on his king size bed and continued kissing her, not softly this time but roughly. One could see his hunger for Flora in his eyes. He moved to the back of her ear and kissed her, he bit her ear. At this point Flora could not suppress the little mourn that escaped her mouth. She moved her hand from his neck to his body, to caress, James let out a sigh.

“Don’t ever leave me”

James raised his head and looked straight into her eyes and said “I would never leave your side my darling girl” He kissed her again as his hand moved down to pull her top. He put his hand on her bear side and caress her. Flora mourned into his mouth

“James, don’t ever leave me”