Home/ President Macdonald's Billionaire Bride Ongoing
To pay the medical expenses for my mom, I married the billionaire I had one-night stand with. 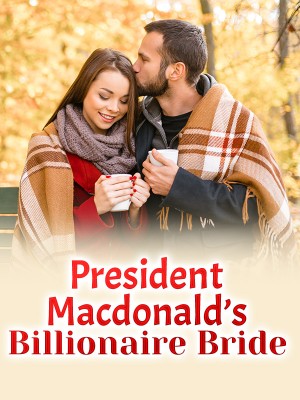 "Get off me! I give up your reward of fifty million." "It's too late. You agreed to save me." "I said yes but I didn't mean to save you this way. Ouch, it hurts!" Annabel saved a big shot with kindness, but he tortured her in bed for the whole night. It was Stefan, the boss behind the Empire Group! The night before, Stefan was drugged by someone who wanted to marry him and he ran into Annabel and begged her to save him. He promised to give her fifty million or marry her as a reward. After losing her virginity, Annabel refused two options, but she changed her mind after four hours as her mother was bullied by others. Only money and a noble status could make people look up to her. So she called Stefan. "Have you made up your mind? Fifty million, or be my wife. You choose one." "Can't I have both?"

About
Table of Contents
Comments (50)

The man she had saved was a real scumbag!

Totally not worth it!

When Annabel Gregory woke up, she felt as if she had been run over by a truck, her bones about to fall apart.

Gritting her teeth, she hauled herself up on the bed, only to find that there was no one else in the room except her. If she didn't see the note the man left on the bedside table, which included his contact information, Annabel would think everything happened last night was just a dream.

Picking up the note, she read the name with her teeth gnashed. "Stefan Macdonald! Bullshit! How can I not know Stefan is your name? If you weren't Stefan Macdonald, I wouldn't save your a**!"

As she was cursing, she caused a twinge at the place where she had been ravaged hours ago. Taking a deep breath to ease the pain, she couldn't control her thoughts fly back to what had happened last night.

When she just got off worked, a man suddenly knocked her over, and both of them fell into the bushes.

Obviously, he was chased by someone, and she heard the people after him muttering, "I spiked his drinks, Stefan can't run far. We must bring him back to the lady!"

Only then did Annabel realize the person who had thrown himself at her was Stefan Macdonald, the boss behind the Empire Group!

He was the real president in the contemporary society!

While she was still perplexed, Stefan, lying on top of her, asking in a daze. "I'll pay you fifty million as a reward. Help me..."

"No worry, sir, I'll help you! I'll save you even if I have to lose my life!" Annabel was cheered up.

Her mother was hospitalized, and she desperately needed money to have a kidney transplant surgery. She must have this fifty million!

And so she had carried Stefan Macdonald home in a high spirit. Unexpectedly, this b*stard didn't keep his words. She agreed to help him, but at the moment he entered her house, he had gone wild, pouncing on her!

Knowing that the man was drugged, Annabel was very considerate to negotiate with him, suggesting that she could give him a cold shower to wear out the drug effect. But he didn't listen at all, directly imprisoning her on her own bed and consuming her thoroughly without saying a word.

She had cried so hard last night as she couldn't stop him. She felt not only her body but also her heart ached thinking about the unfortunate encounter.

It was her first time!

How precious the girl's first time was? It should be saved for the one she really loved!

But that beast Stefan had taken it for granted!

He didn't even give her fifty million dollars he had promised!

Annabel was pissed off. She picked up her phone and called the phone number jotted on the note.

The call was soon connected. Annabel took a deep breath and bellowed with all her strength. "Stefan Macdonald, you're a cheap, despicable a**shole! I'm kind enough to help you. Is this how you repaid the one who has saved you? I should have thrown your a** back to those men in black last night. You deserve to be dismembered and fed the dogs!"

On the other end of the call, Stefan didn't say anything.

Annabel scolded him on top of her lungs. Recalling what had happened last night, she wept again, "I haven't been in love yet. I haven't had a handsome boyfriend yet, and you a**hole, you ruined me! You just wait, even if I have to run to the end of the earth, I won't spare you!"

The more Annabel scolded the other party, the harder she cried.

What evil had she done?

She had just tried to help someone, and she ended up bringing herself in.

Stefan on the other side of the call had kept silent during the time Annabel had been crying. Until her voice trailed off, he spoke coldly, "Have you cried enough? Finished scolding me yet?"

Annabel sniffed, "Why do you sound impatient? I'm the one who's suffering. Can't I scold you to vent it out?"

Stefan ignored her, his voice calm. "I was in a hurry last night, and I didn't bring my checkbook with me. If you want fifty million dollars, come to see me at the Empire Group's headquarters.

"But if you don't want money, I can marry you," Stefan added. "Two choices, your call."