Home/ My Half Vampire Mate Ongoing 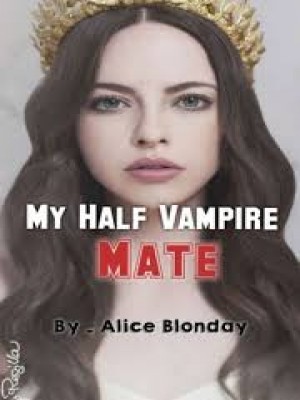 My Half Vampire Mate

I closed my eyes waiting for the impact but it never happened. Instead, a pair of strong arms wrapped firmly around my waist. Once again those hazel eyes were in front of me. I immediately stood up on my own and took a cautious step back. His eyes traveled all over my body, from head to toe. It made me self-conscious for some reason. &quot;The dress fits you well,” then he paused and murmured, looking at the floor. &quot;I was wondering if you'd like it or not.&quot; &quot;Huh?&quot; His head turned to me again as if he was freed from a trance. &quot;So now will you tell me what I have to do for you, sir?&quot; I said sarcastically. &quot;What?&quot; He looked at me with surprise. &quot;What? You have to have some purpose for keeping me here by force,&quot; I said, pressing on the last two words. He paused for a few seconds and then the lamest thing I could have ever imagined came out of his mouth. &quot;Yes, you are here to serve me,&quot; he stated blankly. He kidnapped her sister and forced her to be with him. She waited for the right time to get herself and her sister free. But when the time will come, will she want to get away from him?

*A three years old girl was crying. She was soaked in blood as if she had bathed in it. She was walking in a pitch dark forest, wondering where to go. She reached the road after wandering some more. Suddenly a bright light flashed almost blinding her.*

My eyes snap open as I jolt up in my bed. Sweat is soaking my sheets and my breath is ragged. I have had this dream many times before and each time I end up in a terrible condition just like this.

Now let me introduce myself. My name is Alice. I am 20 years old and the only guardian to my adorable, sweet and innocent sister, Epic. I am living a perfectly normal life.

Very much normal for a vampire, nonetheless. Yup, I'm a vampire.

But as I have mentioned before, I'm not a normal child. Anyway, that night was horrifying. But thanks to the couple that took me in, I could make it through alive. I never gave them any hints about me knowing about my adoption. Nor that I have any interest in knowing about my biological parents. I loved my adopted parents and my younger sister. I was happy in my life. However, I always knew that I was different from others.

But I never pondered over it. I had a feeling that if I would try to find out something from my past my present would be ruined. And I didn't want that to happen.

And now, I have to take care of my younger sister. My mother passed away two years ago and my dad passed away when I was eight. Now I have to pay the debt I have towards my parents for raising me. Yes, I consider it a debt, and I will pay it by protecting my baby sister even at the cost of my own life.

On my eighteenth birthday, Epic insisted to spend the night at her friend's house. Not to mention that her friend is my neighbor's son.

I was alone at home that night. My heart was feeling heavy all day long. Something felt weird, inside of me. A strange aura surrounded me and I couldn't help but feel pressured and suffocated. It was the reason why when Epic asked me if she could spend the night at her friend's house, I could not argue.

It was midnight and I was in my bed. I couldn't sleep because of that weird feeling and was pretty much just tossing around. All of a sudden, my breath became heavier as if someone had put a heavy rock on my chest. It felt like my heart was about to burst. I was overwhelmed with a strange hunger. My throat seemed to shrink in itself and a burning sensation started to bloom at the walls of my throat. It felt more like thirst than hunger. A forbidden thirst.

I didn't realize when I went into the kitchen to calm the hunger or better should I say to quench my thirst. I almost ate everything inside my fridge but it just kept getting worst.

And the weather outside was not making it any better. It was a stormy night and it rained heavily. Just like in those cliché horror movies. A furious thunder roared outside and suddenly, all the lights went out. It was probably a power breakdown due to the storm.

I didn't know what to do or think. The burning was increasing and now it was hurting to the point where I was considering ripping my throat out. My fingers clawed at my neck in a failed attempt to lessen it. At that time, some freaks decided to break into my house. They were robbers and unfortunately it was their last robbery.

When they entered the house, one of them was scratched. The smell of fresh blood excited my nostrils. It felt enchanting and I couldn't help but take in a huge amount of air into my lungs. Just the odor provoked a strange kind of hunger inside me. A wilder hunger than before, empowering my senses, also clouding my consciousness at the same time.

My gaze snapped at the door, which led to the living room. I was in the kitchen just a moment ago. But in a matter of a few seconds, I ran into the living room where the robbers were sneaking around. They were wearing black balaclavas over their heads while rummaging through the stuff in the living room.

They were so astonished and looked as if the air was sucked out of their lungs. They didn't expect to find a girl with red glowing eyes in the living room at 1 in the night.

There were two of them. After regaining his composure, one of them suddenly lunged at me. I was being driven by pure animalistic instincts at that point. I had lost my senses completely. My hand stretched out like a claw and gripped his neck, my nails digging into his skin. I didn't realize when I snapped his neck or sunk my fangs in his jugular vein, in just the blink of an eye. Yes, fangs.

Now, a lifeless body was lying on the ground, blood dripping from the punctured holes on its neck. The other man couldn't quite register what just happened. But the motionless body of his partner was enough to tell him to run for his life. Sadly, it was too late now. He was just a few inches away from the door when I appeared in front of him and did the same as I had done to his partner.

I sunk my fangs in his flesh and quenched my remaining thirst. The burning sensation inside my throat subsided and was replaced by satisfaction. When I came back to my senses I was terrified to see what I had done.

It was the night when I realized my true identity and my strange thirst. In fear that I might lose control and hurt Epic, I sent her to a boarding school.