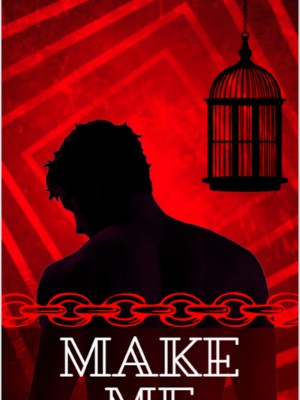 After 18 rough years, Seth is finally living on his own, in college and with a paying job, yet the shadows of his past do not let him rest. Devoured by his need for vengeance and justice, he attracts a demon to his side, who tricks him into selling his soul to him. Jude's seductive and controlling nature quickly turns Seth's life upside down, and though the boy is strong-headed and thought himself to be dominant, he finds himself enthralled by the demon more than he would like to admit. Follow the steamy and twisted story, as the t

"Lower" he demanded in a deep, overpowering, yet smooth almost purring manner. His sharp eyes sat on me with cruel indifference, yet a spark of deep fulfilment reflected in those dark velvet orbs, as the demon looked down upon me, and repeated:

I grit my teeth, as every inch of my body begs me to obey him, yet my mind is screaming in utter disagreement. I hate this. The humiliation... the way he looks so pleased with me at his feet. Ordering me again and again to go...

"Lower, Seth" I felt an edge in his voice, which couldn't mean anything good. I despised every moment of this, but if I want to get my way if I want his power, and if I want my revenge, it might just be a small price to pay. I put my other knee down as well, so now I'm kneeling before him, just as he asked me to. Those sinister lips curl up into a seductive smile, as he watches me swallowing my pride, and I feel my body heating up under his gaze.

He ran his tongue over his sharp teeth, placing two fingers under my chin so I would have nowhere else to look but his capturing eyes.

My life started out in the bad part of the city, amongst people that didn't nearly care enough about me. In the household, I grew up, a family is just a word, you use to describe the people who look alike you, and live in the same house as you do.

For me, it was the word I described my abusers with, as well.

Stumbling and struggling through life, It wasn't rare for me to get on the ground, get picked on, bullied, and being used as a doormat, but one thing did never change and it was my spirit. It never broke, I could never shut up and do as I was told... I believe this was the only thing keeping me alive, pushing me ahead, me not willing to die, to submit to the abuse life put me through.

At the age of 19, I moved out of my hometown and went to college, thanks to my grades, and the hard work I had put into my life, I managed to escape my old self, and start fresh, somewhere far away... yet some things just never change.

Then as I was living the life I was supposed to... something in the darkest parts of my mind, called to me... He had the most beautiful voice, I have ever heard, and with many words, he asked one thing.

"Are you unhappy, my dear?"

He had a way of painting murder as a beautiful velvet garden and deadly sins as seductive smiles. He loosened my morals with the ease of someone loosening their ties, and I watched him do it over and over again.

But for him, that wouldn't have been enough. He said he wants to help, but the price was high. He wanted to take me, all I was, and twist it as he pleased. He offered me his services, his power, and the revenge I was dreaming of, but in exchange, I would be just as much his slave, as he would be mine.

He wanted my pride to break at his will... or in simpler terms... I remember he said to me...

"I want your soul"