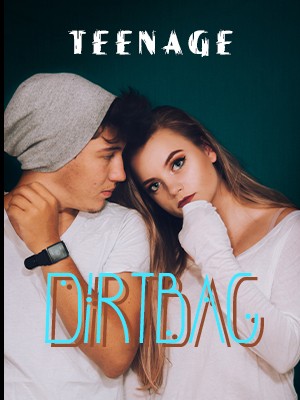 Renee Delilah Parker has always been an average girl. She had average grades, she was funny and a basic tomboy. Her mother sends her to spend the Summer in Ireland, with her paranoid grandmother, her grumpy grandfather and her slutty cousin. She doesn't want to do anything but stay inside all day on Tumblr. It all changes for her when she meets Nathan Harris, the bad boy. Nate's tattoos, his attitude and his flirty ways annoy her, but she can't help the attraction he feels towards him. They're complete opposites: he's the punk bad boy, while she's the goody two-shoes. Soon, he shows her what his life is all about: skating, smoking, drinking, partying, drugs and sex. The normal life of a teenage dirtbag. Without either of them noticing, the start to fall in love. But what will happen when she'll have to leave Mullingar, to go back to London? Is it just a fling for them, just a normal summer love? Find out in Teenage Dirtbag. ---A beautiful summer love story about the

I watched my mother in awe as she slammed a piece of paper in front of me. It was the first day of summer vacation, and she was al—ready pissed at me. I wish my dad wasn't gone on his business trips so much, so he would keep her sane.

''What's this?'' I asked with my mouth full of Lucky Charms cereal.

'THIS is your report card from sophomore year, princess.''

I hated to be called princess. It made me sound girly, which I was not. I loved to skateboard instead of going shopping, I loved to read books instead of partying and going out with friends and I definitely loved plying with my dog instead of making out with some guy. I tried it once, at a party, and I al—most ended up in the hospital because I choked on his tongue.

''So?'' I asked again, leaning in to see what she was pointing at.

''Look at it this way, nothing below C except of English.''

She pulled the sheet of paper back, making a disgusted face. Oh, how she loved plying the drama queen.

''You're drooling milk all over the paper." she spat.

''Well if it's such a shitty report card, then why do you care?'' I mumbled wiping the table off with my sleeve.

I gulped down the cereal, almost having a heart attack when it went down the wrong pipe. ''Is that a bad thing?''

She expected me to be perfect. Like those girly girls you would see on TV with loads of makeup, hair extensions and grades as high as their heels. I wore makeup, because I got insecure of my face and body

and sometimes I would dye my hair in different colors, but I would never wear extensions. Imagine choking on fake hair as the wind slaps you in the face. No thank you.

''I want you to be above average." she continued, picking at a stain of dirt on the table.

''You mean perfect.'' I corrected her, slightly angry that she com—plained. I could be doing drugs or shag a guy every night. Didn't she realize how lucky she was?

She opened her mouth to say something, but I cut her off by jumping up from my seat and pulling my sweatshirt down. Oh, and she hated the fact that I wore sweatshirts. It was too 'boyish' for her. Ever since my brother left for college two years a—go

he was the perfect kid by the way

, she wanted to turn me into him.

Sometimes she would tell me I'm useless— which to be quite honest I was— but it didn't bother me. I never really cared about other people's opinions.

''Well school's over already so there's nothing you can do a—bout it. Now can I go out and skate—''

I winced at her calling me by my middle name. Not many people knew about my middle name, mainly because I hated it. But my mother didn't care about my humiliation, she always called me 'Delilah' when she was angry, which was all the time.

''What moods mother?'' I spat annoyed.

''You're constantly grumpy! Maybe you should get some friends!''

I pressed my lips into a thin line. She did not. Fuck you, I thought as I stomped up the stairs, slamming the door behind me. I jumped on my bed and yelling into my pillow as loud as I could, getting all my anger out. This was going to be a long summer.

Two hours later, I was on my bed, with the laptop on my lap, browsing through my Tumblr dashboard. A lot of teen—agers saw the summer as an opportunity to have fun, go to par—ties and get drunk. I, however, spent my summers inside on my MacBook, occasionally going out just to skateboard or on a walk with Tony, my Bulldog puppy.

"Renee Delilah Parker get your arse down here this very second!" my mother screamed from downstairs.

"Take a seat," she said pointing to the seat, the one I'd previously sat on. I crossed my arms over my chest, raising my eyebrows, not moving from my spot in the doorframe.

"You're going to spend your summer at your grandma's, in Mullingar."

"No I'm not." I spoke, poking the inside my cheek with my tongue.

"We're leaving with the bus in two days."

"I'm not leaving...no." I muttered. When, how, why and who made this decision? I was not going to go to Ireland, I mean, leave London and go to a small town I'm not a bitch, don't get me wrong, but I could bet my skateboard there was no Wi—Fi and no skate park whatsoever.

"I will confiscate your laptop, phone, dog, skateboard, books and iPod for the rest of the summer."

I wanted to smack her head into a wall. Why did she have to be so annoying? Ugh, I hated her sometimes

"You better go pack," she sang in that high—pitched voice of hers and I bit my lip, holding back an exasperated scream. This was going to be a long summer.

"Moooom." I whined for the fourth time on the bus ride from the Ferryboat to Mullingar.

"Can you PLEASE give me something to eat? I'm starving."

She looked down at me, raising one of her eyebrows. "You sure? Cause you've been getting a bit curvy lately."

It was like a stab to my chest. She could insult me on my behavior, my grades and my fashion sense, but not on my weight. That was a sensible subject for me, since I had an Eating Disorder when I was 12.

"Nevermind." I mumbled. There it was again, the feeling of needing to lose weight. If I relapsed and started starving myself again, I wasn't going to be able to stop.

We arrived in a taxi to my grandma's house an hour later. The street was nice, it had tidy lawns and perfect houses, like those you saw in the typical American movies.

The houses did not have a fence whatsoever, I guess people where comfortable with each other in the neighborhood.

I cringed at the high—pitched voice coming from the house next to me. My lovely

made her way towards me, in her short pink skirt, her pink high heels and her white crop top.

She clearly had extensions, because her hair cascaded down her shoulders and almost reached her bum. She wore a lot of makeup, and smelled like cigarettes, boy cologne and some really girly perfume that made your eyes

I noticed she had A LOT of tattoos. A lot of things change in a year I see...

"Hiiiiiiiiiiiii!" she said hugging me. She had to lean down so she could kiss both of my cheeks. Her tall 5'9

frame towered over my small 5'2.

"Oh god your tits are bigger! And you gained some weight! Wow!"

I scrunched my nose. Another weight comment. And my tits are bigger? Wow, she was such a slag.

My grandmother came out with a baseball bat in her hand, wearing her usual Adidas outfit, followed by my frowning grandfather, who had his hands in his pockets and a pipe in his mouth.

"Delilah! How lovely that you will spend your summer here!" grandma said and hugged me. Why was she calling me by my middle name? She knew I didn't like it. And what was up with the baseball bat? Was she on drugs?

"What's with the bat mom?" my mother asked as grandpa helped her with the suitcases. We paid the taxi driver and grandpa went inside with the luggage, mumbling about how I was carrying rocks, whilst 'us girls'—as Katherine said— sat on the front porch, catching up on some 'girl talk'.

"How is Katherine doing?" my mom opened up a discussion.

"Who?" I asked confused.

Grandma pointed with her bat to the house across from us. "She's good, but her younger son is driving them insane. She got married last year."

I had no idea what they were talking about. Who was Little Nate?

"Ha!" grandma snorted swinging her bat, almost hitting a flowerpot. She was crazy, that's for sure. I pulled my legs up on the chair and my eyes drifted to Katherine's lap. She had her phone in hand and she was texting someone. I almost gasped when I saw the text she just received.

u shud send me another naked pic babe ;

gets me hard everytime

Who was she talking to? Oh my God.

"He's not Little Nathan anymore. You should see him; he's like 6'3. Those innocent blue eyes are now darker and that short brown hair he had is now either pink, purple, green, blue or blond. And it's sticking in every direction when it's not under one of his dirty caps. And his arms! Oh God! He always wears tank tops, showing off his disgusting tattoos. His arms and chest are full. I'm not going to continue, I might gag."