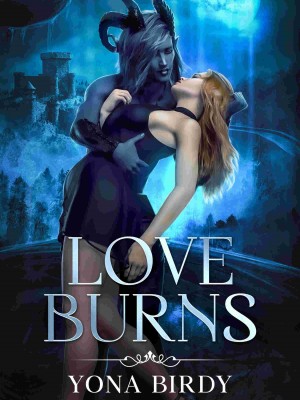 My beloved, If my love burns you, I'll burn myself and my love so I don't see you in pain, But don't fall in love with someone else, That will hurt me, and if you do, I'll not care about your pain. "I can't force you to love me, but I can't see you love someone else." " you love Me ! " I asked him to feel his breath close to my face, and my eyes widened to see well, but I still didn't see anyone. "I do, I love you"

An eleven-year-old girl was playing with her cousins on her farm garden.

"Lauren, give us the ball " jack said to her while running but she had another idea and kept moving lightly with the ball.

Marry yelled making Lauren laugh after scoring a goal in the haystack.

" What a shame !  I'm the youngest and you couldn't take the ball from me "

Lauren mocked them, they stopped playing with her, started their way back to her home.

Lauren warned them pointing at the thin bridge that they have to cross above the deep river.

"Did you hear that ?! " Lauren asked her friends after hearing an angry whisper in her ear.

Marry shocked her head at Lauren , then she heard that sound again .

The voice sounds more angry, she felt a headache all of sudden.

She touched her head in pain.

" Lauren are you alright! "

Her cousin asked, but her vision is blurry.

She slipped her leg because of headache, she fall into the lake.

Jack yelled kneeled infront of the water looking for her hand which he couldn't find.

"Jack, please jump after her!"

"I can't swim, we need to tell someone quickly!"

Jack and Marry ran towards the house, while Lauren sank deeper in the river and saw nothing but darkness.

Lauren tried to call for help and tried to swim towards the surface, but she couldn't swim, until she gasped in shock when she saw him in front of her for the first time.

She was moving in panic, as he quickly approached her, hugged her, she felt as if Hell is embracing her.

She heard her nickname coming out from his lips and thought that he was the Devil, because of his horrific appearance , his dark long black hair, his red eyes . She started losing consciousness little by Little.

Lauren's father screamed as he approached the bridge with his wife and the children, Jack and Marry.

They found her cuddling her legs over the bridge, she was wet, shivering and looking at the water in panic.

" Lauren, thank God that you're safe."

Lauren's father hugged her tightly and she surrounded him with her two small hands and start crying in his chest.

She whispered in fear while pointing at the water with her small hand, her father looked at the water and saw nothing.

David told everyone, and he thought his child was hallucinating because of the water.

"How come there are no fried potatoes in the cafeteria, are you kidding me!"

I shouted angrily at the worker who was making new fries.

"I swear it's all finished."

I sighed angrily and went outside the cafeteria to sit and watch the football match outside,

I Folded my arms frustrated, I wanted to eat something while watching.

"And now with the most handsome college boy who will score a goal , and there he is, yes!"

I spoke to myself and clapped loudly when he scored a goal, and he looked at me, so i stopped clapping and looked away embarrassed,

I leaned over the chair with my hand, and I frowned when my hand sank into something,

I looked at my hand and it was a plate of fried potatoes with lots of ketchup on top.

I licked the ketchup between my fingers and looked around looking for the one who brought it for me,

I said happily, then I held the plate in my hands with a smile and started eating it while watching the match,

"Don't you dare whisper Lulu in my ears, Jacklin"

I warned my best friend when I heard her steps behind me, and she laughed, then slapped my head and came to sit beside me, and she took a ram of fried potatoes in her hand that I looked at her angrily when she ate it while watching the match with me.

"You haven't recovered from the Lulu's issues yet"

Trying to change the topic I said to her.

"Look at Loue, how he passes the ball."

I told her and ate a piece of the potato

" Are you going to invite Louis tomorrow?"

Jacklin said that made me smile at her, tomorrow is my twentieth birthday party,

"I don't know, I'm embarrassed. I've never talked to him before"

I said while she smiled an evil smile,

"Then we'll get you to do it unwillingly ."

Jacklin took my hat off my head and made it fly in the air that I screamed.

I stood and ran after it, and the idiot hat was heading towards the stadium, before it suddenly stopped and fell on the ground,

I breathed with relief that it didn't move any forward, and I stuck-up my tongue out to Jacklin behind me, who threatened me with revenge and started eating my fries,

I rolled my eyes at her, and extended my hand to take the hat,

Suddenly all my skin shuddered, and I hugged my coat tightly, it always happens to me, that sudden shudders .

Finally I put on my hat and adjusted my hair, looked again at the stadium and gasped quickly,

" I See you here every day, so you like football."

I was smiling stupidly, he came to talk to me!

Louis reached out his hand to me that i took it hesitantly, and then I spoke,

"Laureeen , come on, we're late. We have to buy the dresses for your damn birthday party."

Jacklin screamed behind me that made me bit my lips to control my anger.

He asked me jokingly, and I looked behind me to Jackie with a wide smile,

I interrupted him quickly, that he smiled, and I gazed at him with admiration, he was writing his number on my phone and calling his phone back,

He returned the phone to my coat, and waved to me while he ran back to his friends.

" Earth to Lauren, he left half an hour ago".

I found Jacklin in my face, we're giggling widely and jumping.

"This is the happiest day of my life."

I shouted and ran outside the university to jacklin's car ,

Jackie ran behind me and I heard her insulting me,

"I liked your plan"

I told her while she was running the car, and I got in quickly to take shelter from the rain.

"We're best friends after all, and now, Are you going to wear sleeves or without?"

I answered quickly and looked outside the car hoping she would not ask,

And here she is.

I looked at her, sighed, and then lifted the coat from my left arm to make her see the big bruise below my elbow, it's been there for three days already.

"Maybe I should sleep beside you today. I'll tell my mom and come to you. Lulu shouldn't bother you on your birthday."

"Stop saying Lulu, I am Lulu not him, I don't even like that nickname."

I said angrily and my voice came out a little childish, which made her laugh, so I laughed with her,

I will not make him bother me on my birthday.

I arrived at my house after I bought a suitable dress.

I yawned tiredly, so I went pour some coffee from the coffee machine .

It is my third day without any sleep, my head will explode from headache and my eyes are swollen, my body is cursing me asking for sleep, but not before Jacklin comes.

I leaned my head over the coffee machine, shutting my eyes for a moment, which were tightly clipped together.

Then I heard his dark whisper !