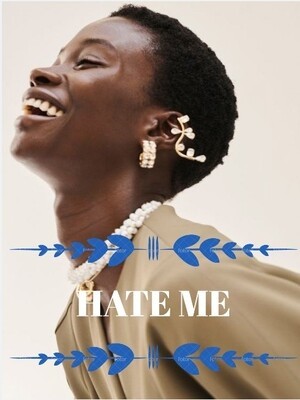 He looks into my eyes suddenly, my heart misses a few beats. "Do you like me? "He finally asks. I almost choke on my saliva. "Yes." Sneak past my lip. I use my hands to cover my mouth as if that would make him unhear my confession.

It is officially another term at Star High Academy. I had just come down from my bus which is parked in the field. As usual, we're the first bus to arrive.

Our driver has a habit of keeping good punctuality records at every first week of a new term, but as we approach the middle and latter ends of the term, what seemed like the best punctual record drops down to the worst Star High has ever recorded.

The school compound is still a little bit empty and ghost-like, with only a few junior students, scattered around the school. I briskly walk towards my class as I want to seek shelter from the blazing harmattan breeze. It had become so cold that one had to squint his eyes To make out what stood before him.

On getting to my class, only Dapo and Feyi are here, and for that I am grateful, cause had the class been full, I would not have a comfortable seat as all the good seats would have been taken.

Dapo has been the nerd of the class right from junior school. And I heard he skipped a grade in primary otherwise he would be a class behind us. Little wonder he's one of the first to make it to class today.

It is our first day in senior school and we were all excited that we made it through our Junior WAEC. Although we don't know what to expect. We all made sure we are fully prepared for our new experience.

I remember forcing my father to get me a new mathset, calculator, set of stationeries and I even refused to use short notes and demanded higher education long notes.

For all I care, Now I am fully ready for school and nothing could stop me. I even had crayons and pencil colors in my bag

. Every of my stationery has a spare, in case something should happen to the first.

As ready as I am for school, I am not ready to face the continuum of gossips that started late last term. I know it was all my fault but I still do not want to face the facts.

So this is what happened

in case u are wondering

. So this good-looking Muslim boy, came to our school last year. He was meant to be in year one senior school but the school chose to put him in year three junior school!!.

The week he came to school, news spread like wildfire that a very good-looking guy was going to become a student of our school.

my other best friend

and I weren't, we knew he would eventually come to our class so why the rush?; But to fulfill all righteousness, we both had to step out of the class.

Otherwise, when the other girls return, they would call us names like"holier than thou" and even tag us hypocrites for not going out to see the new center of attraction!

The rest of the class had settled down but you could still sense the tension in the air for the arrival of this new boy.

Mohammed was a Fulani boy that undeniably had captivating looks.

Dina and I did not sit close to each other because of how the teacher arranged us, Faith

didn't seat with me either. I sat at the end of the class Which was close to the door.

The class was so full that there seemed to be no other space in the class asides from the vacant seat beside me.

When the schools' receptionist brought Mohammed to the class, the poor boy just stood there, possibly wondering where he would seat, So I packed my things and offered him my seat. Then I went to share seats with one of my classmates.

I admit I did like Mohammed, but being too pushy and having foes as friends ruined things for me. Long story short; I made a fool of myself before Mohammed and people like Silvia and her gang had me in mind for ruining..... Well only God knows what.

Back to the present. I pick a seat at the back of the class and put my bag on the other seat at my left to indicate that It is taken. I saved it for Faith as it seems like a nice thing to do for my best friend.

I know she wouldn't like to seat at the front and If I do not save her a seat, she would have no choice but to.

Dina and I are no longer on talking terms as she left me to join Silvia's gang! Just to be clear, that's the gang whose leader is out to get me!

Later, the class begins to fill up and by the end of the day, we only record a few absent, out of Which Faith is among and zero new faces.

a crime zone for both of us

. We make noise, sleep, eat and give silly answers to the teacher's questions

Faith and i: Wire!

Form back there we never got caught.

I made a promise to myself that I am going to change in this new term and I would be that better version of me that no one knows exists.

The first week was a little stressful but very exciting, as teachers tried to be friendly to create a good first impression about them on us.

Dina and I have been avoiding each other. I do not want to be around her to avoid spitting out all that is on my mind and how bad I want to scream in her face how much of a traitor she is.

On Wednesday, we had a newcomer named Edna. Faith quickly took a liking to her, and I guess Edna did too. I was quite intimidated by Edna cause is very huge and tall. But she is equally as cute with her huge gaped rabbit tooth.

Being a newcomer, Edna wanted to get along so badly and Faith and I were willing to help. But she got off well just being on her own cause she has her own style and rather people wanted to be around her, although Faith and I are Ednas friends, we aren't often found hovering around her, as she often chose peace over company.