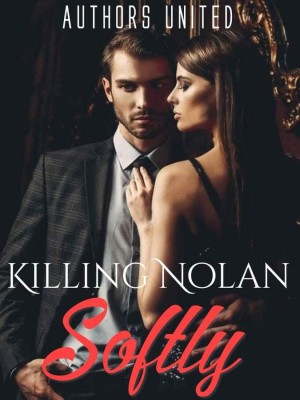 "There's only one thing that can make a simple art exhibition so tiring; Evelyn Bennett." *** Nolan is the first son of the Walter Family and the I-Don't-Give-A-Damn kind of playboy. With Mr. Walter getting sick of the position, Noah has to step in as the President of Walter Corporation. Fire meets Fire when Nolan meets Evelyn Bennett, the Lotte Corp Heiress and "competitive-ass". Always getting at each others throats, they would do anything to save their pride and come out triumphant, but when this "hatred" spins into sparks of passion, things can get very crazy and there are obstacles around the corner.

A fake smile is plastered on my face as I stare at the man in front of me.

His name is David Rowland, and he is the producer of the upcoming film, "Love Me Harder." And right now, I am trying to concentrate on our mindless conversation, trying my best to look animated.

"You know you have the perfect bone structure and the body of an actor. Have you thought about being in the show business?" David says and looks me up and down. His eyes linger on my breasts a little too long, and I have the sudden urge to throw my delicious wine at his smirking face.

But I couldn't do that. I was here for a purpose, and it was to impress this man.

"I'm more of a businesswoman," I say and force a smile.

"Oh? What kind of business?"

"Well...I..." I stop midway as I spot a tall figure in my peripheral vision. My heart stopped as I looked at the lean, hard body in an expensive, well-tailored suit.

Thankfully, he didn't see me yet. "I am also in the hotel business," I say quietly to David.

I finally had the chance to talk about my business with this elitist asshole, but I knew I had to make it quick before Nolan saw me because as soon as he found out I was crashing this party, my whole plan would be down the drain.

"Actually, I wanted to talk to you about the next event you are having. I hear it's a big one," I decide to cut to the chase. Time was running out as Nolan made an appearance.

"Ah yes, the after-party for the awards ceremony. How did you know about that?" David narrowed his eyes.

"Why don't we discuss more over dinner? I have an amazing proposal in my mind, which I think would benefit the both of us," I smile seductively and trail my long nails over his arm.

But I don't have time to celebrate. I looked around anxiously as I didn't see Nolan anywhere. Where is he? Did he see me? I need to get out of here!

"Amazing. Here's my card," I say and tuck my business card in his front pocket. "Excuse me a moment, I need to go to the ladies' room," I murmur and turn around to walk away before David has the chance to stop me.

I didn't make it to the exit and hit a wall as I was not looking where I was going. Or at least, it felt like a wall. I fell on my ass while the wall stayed glued to the floor, my dress hiked up halfway to my thighs. I finally look up, and my eyes meet with the sharpest grey eyes I've ever seen, and it robs me out of my breath.

"Nolan Walters," I croaked out.

"You," he simply says. He looks down at me with fire in his eyes. If he had the power, I would be a pile of ashes on the floor.

"Are you going to help me up or stand there like a dumb lamppost?" I barked after recovering from my initial embarrassment.

Nolan took my hand and pulled me off the floor. "Evelyn Bennett. You are trespassing," he declared.

"I was invited," I reply lamely. This was a party hosted by his hotel. How could I possibly get on the list? But I had to try.

"I don't think so. Nice dress, by the way. At least you'll look good while my security team drags you out of here," he says and grins arrogantly.

"I haven't done anything wrong," I said. Besides trying to steal his client, I think to myself. But he was the one who stole him first!

"I saw you talking to David Rowland. You think you're so slick, don't you, Eve? Well too bad you are just sex on legs with nothing going on in that pretty head of yours," he whispered hoarsely.

I grab his tie and yank him forward to bring him down to my eye level. "Listen here, asshole. You better watch your back. You may have won this deal with the movie production, but..."

"But what? Are you going to steal the next one by wiggling your ass and batting those eyelashes? Typical women." He shook his head.

"Try and stop me, asshole," I snarled. I was at my wits with this man. Who does he think he is?

"I will stop you right now! SECURITY!" Nolan's booming voice echoed through the walls, and soon, every guest and their mothers were staring at me.

I see David looking at me in the distance.

"Look, Nolan. David finds me attractive and we are having dinner tomorrow. I'm sure he would like me to stay, and he paid a lot of money for this event," I said triumphantly.

Nolan wrinkled his forehead. "Is that right?"

"He is looking at us right now, and he will be displeased when he sees you dragging his favorite guest out of his party," I say hopefully, but I am not sure if it's true. David doesn't give a shit about me and is already chasing another tail at the party, for all I know.

"He thinks he is going on a date with you, does he?" Nolan smirked.

I didn't have a good feeling about his smile, but I ignored my instinct. "That's right. I've already won his heart, so you might as well just kiss his next event goodbye."

"He won't want you after he sees you kissing another man." Nolan's grey eyes twinkled under the fluorescent lights.

I look at him quizzically. "Kiss who?"

Nolan grabs me and presses his lips on mine in response. I smell whiskey and cigar while the tip of his tongue traces the shape of my lips, then the seam in between. He is nibbling on my lower lip, setting fire in my body. This bastard is an excellent kisser, but I must fight it.

This is Nolan Walters, and he is an arrogant, disgusting man and the rival of my father's company.

I come to my senses and smash my Louis Vuitton heels on his right foot.

Nolan yelps and lets me go. "Now I have to charge you for trespassing and physical assault." He chuckled.

"This isn't over, you just wait, Walters," I threatened him.

"I won't hold my breath, Eve. If I see you anywhere near my client again, there will be hell to pay," Nolan hissed.

I won't let him get away with this, I thought as I sprinted my way out of the ballroom.