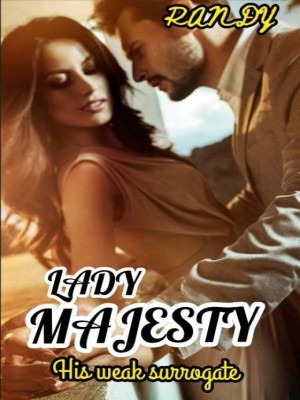 Her glamorous fantasy evaporated immediately the handsome face came into view with its vicious aura. Her heart sank and her hands began to tremble. 'Be calm, Leona, he's your husband, not a demon ', her heart faltered as she made an effort to calm herself with such false words. He was indeed a demon that she loathed but feared. He was more hazardous and brutal than a monster. He leaned closer and her breath hitched. &quot;Why, dear wife, do you flinch? I don't bite, do I ?&quot;, his hot breath hit her neck as it enclosed her whole entity. She bit her lips as she wished to scream in his ears that he was nothing but a monster who held her captive. Ha... Such courage will come from her second life. &quot;Nothing. Just weak&quot;, she responded certainly but nervously. His brows furrowed as his ocean gloomy eyes rested on her small lips. His finger trailed her lips with unmistakable desire in his eyes. She felt disgusted but was powerless. She turned away from him as a tear trailed down her white face. Her veins popped up and her chest felt like it was going to burst any time soon. She choked a sob as his cozy pair of hands cupped her face. &quot;Mine!!, these lips are meant to moan not cry&quot;. .... She was an innocent girl whose tremendous life was turned upside down when she mistakenly appeared at an uninvited wedding in the hotel. She arrived with a purpose, however, she lost her way. Her charm made her an accidental surrogate but a weak one as she got to know that her unexpected husband was the ugly and brutal heir to the throne Though sad at her sudden predicament, enemies rose against her, as they tried to get rid of her. Time went by, Circumstances lead to circumstances, affection set in. When this Emperor and his Empress was willing to work out a relationship, something startling happened. What could it be? Reinforced by Love and fuelled by revenge, this weak Surrogate takes the throne and brought affliction to those seeking her life and crown.

A painful sob escaped my mouth as my nude body met the hard, cold floor. It felt like I was being stabbed by a thousand knives, which went deep into my heart.

I tasted my salty tear as it trailed into my lips. My lips trembled in pain as my body felt so weak like I was hit by a speeding lorry.

I was dragged up by him. He hit my back on the wall with a powerful palm on my neck, tight.

"Tell me who it was? ", his cold voice made me tremble with fear as my remaining courage sank to my stomach.

My eyes became dark, my cheeks hot and my ears seemed to have thousands of bees buzzing near them. He slapped me.

My body met the floor once again as he threw me to the floor roughly. With pain, I raised myself from the ground and stared at him.

Face red as hot coal, eyes squinting meanly like it was going to pop out, with his fists clenched, he stared at me with anger.

'BANG!' He slammed his fists onto the glass table as it shattered on the floor.

Today would be my end for certain.

"I will kill you today, cheap whore", he spat calmly with a hard edge, before he came on me again.

Though scared to the bones, I felt a gleam of joy in my heart as I saw death. The only escape from the demon.

My lips stretched into a painful smile as I recalled how my used to be a ' peaceful life' melted into a life of torment, only in a matter of hours.

" Where are you? The interview is about to commence ", Rita my best friend breathed immediately I picked the call.

" Almost there " I sighed, took my files, and alighted from the cab. "Thank you, sir", I said to the driver after taking my balance.

" Better run. The interview is taking place on the right side of the second floor. Hurry! ",

With that, she ended the call as I walked into the five-star hotel.

I am Leona Rowland, the only daughter of a single mother, who's father denied being responsible. I graduated the last three months and had been jobless since then. Rita got information that the hotel would be recruiting new employees, so here I am for my interview as well as Rita.

I greeted the guard outside and ran to the elevator. Gosh, I need this job. Getting off the elevator, I went towards the right part as Rita said.

I ran and saw a decorated door. I exhaled before pushing the door open. Lo and behold, there were a group of people there, but they didn't look like they were here for an interview.

They all turned towards me. The starring was much that I began to sweat internally.

They were all dressed elegantly, and there was a priest. A wedding? God, it was truly a wedding. I need to get out of here.

I froze on the spot as guards surrounded me. I was burning up already. I felt my hot sweat trailing down to my stomach.

A man in a white suit walked to me smiling.

"I'm very sorry, sir. I didn't mean to. I lost my way ", I spoke nervously. Though he was smiling, there was also a chilling attitude behind that smile.

"Lost? Oh, You didn't, dear. You just saved us from a whole lot of trouble ", he smiled the more.

His smile made me feel uneasy, and time was also running out.

"What do you mean, sir. Please I came for an interview here but lost my way", I pleaded the more.

I don't know why I feel so uncomfortable here. Was it because the people here seem to be noble? Yes, that must be the reason.

"You see, this is a wedding. The bride didn't show up and my master will kill me if I go home without a bride. And he called to ask for a beautiful substitute.. ".

" I can't. I will take my leave right now, please ", I spat sharply when I knew where he was going.

His hand held my wrist as I was about to run out of the hall.

"Not so fast. I'm not begging you, miss. This is an order. You either do it or you would be sued for appearing here. Think about it ", he's smiling face was replaced with an angry one before he left my wrist.

He can't sue me, right? I never heard of where one was sued for mistakenly appearing at a wedding. He must be joking.

No, I don't think he was joking. All the people here are wealthy, which means they can easily sue me for any suspected crime just because I appeared here mistakenly. How will my mom cope if this ever happens?

Gosh, what did I get myself into? He faced me, his lips plastered with that comely smile.

"You made the right decision ".

That was how I ended up getting married to a man who even didn't appear at his wedding. Such a man. It's no wonder his bride ran away.

After the wedding, I made to leave but the man refused to let me go. He said his master wanted to thank me for doing him such a favor.

'A favor indeed ', I said to myself recalling how I was threatened.

The entire time I kept thinking of my failed interview. I needed that job so much, how I wish this substitute husband of mine would reward me with a huge amount of money.

I can't wait to give it to my super mom.

I was lead to a red Lamborghini. Wow, this man must be wealthy.

Only if I knew who he was beforehand, I would have fled.

"Isn't this the way to the royal palace? ", I asked the man in a white suit who was sitting beside me.

I have been to the palace twice, I'm sure this is the way to it.

"It is. That's where your husband lives. The crown prince", he blurted smiling.

We already arrived at the huge gate as my brain began to function again.

"Please let me down. I don't want the reward again!", I screamed but it was too late. We were already inside the palace.

How could I not have known? This can't be happening. The brutal and ugly prince, who was impotent? Would he ever let me go?

I was lead to a room in a mansion beside the palace itself. The room was dark and had only a dim lantern.

I made my way to the cushion and sat, thinking about the den I crept into. I was so lost in thought that I didn't hear the door being unlocked.

"Well well well. Who do we have here? ", A manly but cold voice startled me as I sprang up from the cushion.

" Who's there?", I queried nervously as the light was so dim that the room still occurred to be dark, making it hard to see a thing.

Before I could say 'jack', I was pushed hard to the cushion, as a robust and huge body covered me. My breath hitched as a strong male deodorant went into my lungs.

"Get off me!!", I yelled in disgust as I struggled to get out of such an awful position but he was way too strong that my struggle was a failure, as I lost strength.

"I would go gently ", he whispered as he patted kisses on my neck.

His hand went down to my skirt, then did it occur to me what he was up to. I struggled, kicked, punched but it was like I was trying to catch the air.

He tore off my skirt and blouse as hot tears trailed down my face.

Right there he took my innocence without pity. It was so painful that I cried and yelled but the monster of a man didn't stop.

After about an hour, he got off and ran out of the room. I felt so sore down there that I couldn't take the risk of standing, talk more about walking.

I cried till I fell asleep with the determination of leaving the next morning.

I woke up in the morning to see the cushion was stained with my blood. I checked my environment and saw it was a beautiful bedroom with a small living room, a balcony, and a bathroom.

I hurried to the bathroom and cleaned the cushion with water and soap I found there. I took my bath and wore my already ruined clothes back.

While I was admiring the room, the living room door was opened as a set of servants served me food. It was a delicious and rich breakfast.

I slept off and woke up when I felt a hand on my thigh. Starring right into my eyes was one of the most handsome faces one could ever see on earth.

He smiled out dimples as I withdrawal my legs sharply.

I was stunned. Wife?

"Are you the prince? ", I asked ,surprised for I heard the prince was so ugly that he refuses to appear before the public. How could this man be the prince?

"Yes. Now take off your clothes ", he ordered with such an authority that I came to believe he was the prince. But how could he be handsome?

'He must have undergone surgery.'

"Surgery? ", he said with fire in his eyes