Home/ Taken By Her Mate Completed
My Alpha mate kept hunting me for three years. Now, he got me... 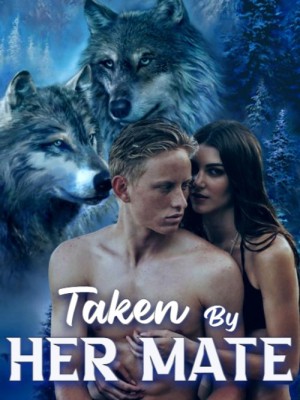 Taken By Her Mate

A whimper slipped past my lips as he backed me to the wall, with every step he took further, my heart pounded against my chest. When the distance between us disappeared, he leaned down and whispered. "You have been such a naughty girl for so long and it's time for your punishment," My lips trembled as I spoke, "Is this a game?" - Surviving as a lone wolf was difficult, especially when you have so many enemies chasing behind you. Myra left her pack at a very young age and found shelter in a small city. It wasn't long enough till the wolves found her and captured her. She was thrown at the feet of the Alpha Bane and was forced into submission.

It was cold. I felt my pulse accelerate as my bare feet imprinted the slippery grounds of Ampleforth. The air thickened around me as I began to run quicker. They were behind me, hunting me in their wild forms. My canines brushed against my lips as I felt them getting closer. Their trails echoed through the splintered, dark woods.

The moon was crimson above me. It begged for blood. Bones snapped and cracked as I shifted into a devilish looking werewolf. My pace quickened naturally and I dashed my way out of the woods.

The others didn't pause. They continued to chase me as if I was the only lone wolf alive. They had been hunting me for over three years now. However, something was strange this time. The wolves were stronger and sharper. Regardless of many times I struggled to hide, they found me but they failed to capture me.

The Alpha must've sent great warriors. He demanded my blood just like every other wolf in the city wanted. My heart pounded against my furry body. Shallow breaths made their way out of my punctured lungs. My limbs were sore along with the rest of my body. I was unaware of how much longer I could run.

It had been over four hours now. The sun had dropped down and abandoned the sky. The moon had appeared and ravaged the sky with its own darkness. I came to a quick stop but my heart proceeded to panic. A chill traveled through my spine as my eyes quickly wandered around the woods.

Where are the goddamn roads? I groaned to myself before kicking the mud off with my paws. I needed to find an exit as I could no longer hold the others off. I needed to escape. The woods were dark with hardly any source of light. Branches snapped behind me, and a growl made its way to my ears. They were here. Sniffing the air, I realized that they were circling around me, one by one, trying to ambush me in their mischievous games, but I didn't surrender, not yet.

I found my way to the paved roads resting outside the woods. As soon as I touched the ground, I shifted back to my human form. Cold grazed over my flesh as I wrapped my hands around my bare breasts before heading towards my car that was parked by the woods. Sitting inside, I glanced at the dangerous woods one last time. They were gone. A sigh slipped off my lips, and I pressed my head against the flat seat of my car.

"Nice try," I murmured before twisting my key inside my car and switching the engine on. With one roar, my Jeep rolled out of the woods.

The panic welled in my throat calmed down as the city appeared in my view. Ampleforth. The city of creatures and savage monsters. The city was ruled by the Alpha - Bane. As per the law, wolves weren't allowed to snap at other wolves in the city grounds. Blood could be only shed in the woods, nowhere else. Humans resided almost everywhere, however, they were unaware of the danger they were surrounded with.

I tried to dissolve with the humans and hide my natural scent, but sometimes, it couldn't be hidden.

Sparkling blue and golden lights flashed over me, I directed my eyes towards a small parking lot just outside my building. Once I sensed no danger, I threw on a jacket over my bare body and then stepped out of my vehicle.

A gasp escaped my throat as the loud sound of my phone ringing echoed. I quickly grabbed my phone from my seat and looked at the caller ID, it was Cindy.

"Hey, I have been waiting for you for an hour now! I thought you were supposed to be here at 8?" She snapped at me, sounding exhausted and irritated.

"Aight! Just another minute. If you ain't here then I'm leaving," She sounded convinced that I would not come.

"Stepping in the elevator," I said as I walked inside the building and waved at the security guard.

The call closed automatically, and I made my way inside the elevator. After pressing the blue buttons, I rested my back on the tall glass and closed my eyes.

It was an unpleasant and a rough evening.

"I'm sorry that I couldn't make it on time. I just got into some trouble," I said as I walked inside my apartment. It was warm inside. My trembling body finally received some warmth.

"Why are you naked? Did you go for a run?" She questioned as she glanced at my bare legs. I wasn't entirely naked though.

"No, I got chased, for four fucking hours!" I exclaimed before chugging water down like it was booze.

"What?! Why?" Fright grasped her tone as she realized the truth.

"They are back on track — to hunt me down," I replied. A moan choked out of me when my body crashed on my comfortable couch. My bones were aching with tremendous pain, and I required a long rest.

Cindy was unaware of the Alpha and his pack. She only knew bits, after all, she was a mere human. The knowledge she received about the wolves was from me. I met her a few years back when I was running away from my own pack in Ostbridge. We quickly bonded over a couple of beers at a bar nearby. And since then, she had been my best friend.

I broke the wolf law when I told Cindy the truth about me and the other creatures residing in Ampleforth.

"Because I am a lone wolf, Cindy. They hunt down wolves like me," I whispered as I rubbed the nape of my neck.

"Then it's dangerous for you to stay here, you should leave!" She suggested with worry lacing in her tone.

"I can't escape, the wolves patrol the exits of the city and the out-going flights from Ampleforth are also under the alpha's control. I can't do anything except for hiding and merging with the humans," I explained.

The wolves were unaware of my real name, job or anything else. They hadn't even seen my wolf. They only knew my scent and the terrifying scent of a lone wolf scared everyone.

"Well, you should get some rest, you seem tired," Cindy said as she picked up her bag and headed for the door. I invited her to my place so we could hang out and drink some booze, but it seemed like that couldn't happen anymore.

"Thank you for coming," My body crushed against her and I hugged her tightly. She waved her hand in my direction and then walked out of my apartment. I felt guilty knowing that she waited for me for an hour and I couldn't come on time. Well, there was always another day to hang out.

Once she left, I picked up the calendar and noticed the dates. I shrieked out when I realized that tomorrow was the blood moon — the day of mating, the day of fulfilling desires and finding out the one who you would stay with forever.

"Fuck no!" I exclaimed as I plopped down on my couch. The blood moon stressed me out each and every time.

The terror of being mated with someone clawed my insides out. I couldn't bear male wolves — due to their nature, they were perceived to be more possessive, violent, and aggressive to their females. It was also a known fact that in the werewolf world, females were underneath men as they held more power. Rubbish. There was no chance I would ever mate with one of my own. I'd rather die mateless than being mated with a male who sees nothing except for power, domination, and control — who sees a female as a breeding whore to ravish and command.