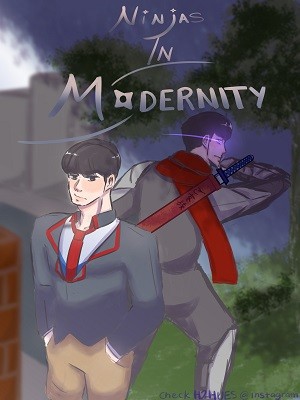 [Ongoing] The Ultimate Ninja, Abellona Roy, is tired of his ninja lifestyle. Tired of the same crap every single day. So he escapes with his little siblings to get a taste of what normal people live like. But...it seems like his past is there to haunt him. And forces of evil are finding themselves face to face with Roy. Would Roy truly find his peace in life? Find it out by reading this story. ____________________________________ Also, keep in mind that I may change some stuff here and there. Even if it's already published. Also also, here's the artist of this book cover: https://www.instagram.com/h2hues_repichu/ Go visit him if you're interested in his art style.

It is morning. The sun is rising. Roy looks at his watch.

Roy is walking down the left side of the road. A couple of cars passes by him but few people are rarely seen on the streets. Especially at this hour where school usually starts. Roy ignores it. He acknowledges the fact that he is just new to this city.

"Maybe it's because I'm early...", Roy talked to himself again.

As Roy walks he wears his usual cold and neutral expression. Not smiling, but not frowning.

'I may have to adjust my sleeping schedule if I want to blend in’, Roy thought to himself.

'I'm no longer a ninja. I'm just a regular student, walking down the road regularly, and regularly living my life.', Roy said this to himself in his mind.

As Roy is whispering to himself, a scream occurs behind him. Naturally, Roy looks behind. To his surprise, Roy sees a street dog chasing a short-haired blonde schoolgirl with ruby eyes and tanned skin. The blonde girl was

running away from it, with a hint of screaming.

"Wait! St-stop!", said another schoolgirl behind them.

She's a silvered long-haired female with blue diamond-colored eyes with a pasty skin tone and seems to be running out of fuel. Roy also notices she's wearing a silver metallic necklace. For some reason, it feels familiar-looking.

'Hold on, an average dog can outrun an average human. If that's the case, then how is she-', Roy's thought was interrupted by both the blonde girl and dog passing by them.

The silver-haired girl is slowing down and even stopping near Roy, breathing in and out like she's dying. Roy looks to where the screaming girl and the wild mutt are, to find that both of them are running in a circle. Roy sighs.

'I guess I'll have to become the Ultimate Ninja once again', Roy thought to himself.

Roy gets into position and zooms right between the dog and the loud screaming girl. The dog snarls and bark at him but suddenly whimpers when Roy looks into its eyes with a cold and deadly glare. The scared mutt suddenly turns its tail around and flees. Roy sighs again and he wears his cool and calm expression. He was about to leave when the blonde girl runs in front of him.

"Hey, thank you for saving me! You're my hero!", she said in a very loud manner.

The tired and sweaty girl that is dying comes up to them.

as he was about to leave

"Yes... Ho-", Roy stopped himself from asking her.

Realizing that he is wearing a uniform made by the school and later recognizes the uniform they are both wearings.

"I'm Himara Yua! And she's Ichika Sara.", Yua said as she signaled Roy to tell him his name.

"Wait! Why did you say that?", Sara exclaimed.

"Well, I just wanted to know my savior's name. Is that wrong?", Yua answered.

And at this moment Roy’s thinking out a plan to get out of this situation he's in because he knows what will happen next if he doesn't do anything.

"Wanna come with us, Roy?”, Yua asked Roy with a huge smile on her face.

And those are the words that he doesn't want to hear. Also, Roy questions why they are on a first-name basis already.

NOTE: In Japan, it's rude to say someone's first name unless you're really close or are allowed to.

"Hold on! Yua, can you come here for a second?", Sara promptly waved her hand to signal Yua to follow her.

Unfortunately, Roy’s trained to hear information from a faraway place, and considering there’s not much noise going on, it’s easy for him to listen in.

"Yua, why did you ask him to walk with us? We don't even know who he is?", Sara questioned.

"Well, that's the point on why I asked him. I want to know him even more.", Yua gave her an answer quickly.

"Well why do you want to know him?", Sara asked again in a firm tone.

"Well because I decide that this year, I'm gonna have new friends.", Yua said with pride.

"New friends? What's wrong with me?", Sara asked in a sad matter.

"It's just that?", Sara's pressuring her to make her answer.

"Well, I just wanted something new to happen this year. And I-"

"Wanted to prove to the others that you can make friends other than me?", Sara interrupted.

This causes Yua to fall silent.

"Listen, Yua. You don't have to listen to them. And like what I told you before, YOU yourself can choose whether or not to let words hurt you.", Sara added.

"I know but it's hard not to. I'm not like you Sara. I can't just block out all of these insults.", Yua retorted.

"Maybe you'll learn to grow some skin someday.", Sara ceased pressing on this matter and tries to calm Yua down.

"But I still want to know him better. I want to have another friend.", Yua said calmly while she took a glance at Roy.

Roy, who’s looking at them, suddenly turns his head in the opposite direction. Sara eyes Roy from top to bottom. Then Sara looks at Yua.

"Fine, just this once I'll tolerate it. Now come on, we might be late if we stay here.", Sara gave up and let Yua have her way.

Both of them suddenly approach Roy. Sara’s lagging while Yua’s running towards him like a kid heading towards an ice cream truck.

"No.", Roy said quickly before letting Yua finish her question.

"Wha-what?", Yua was confused by this.

"Listen, it seems like that your friend over there doesn't want me to join your trip to school and I don't want to bother anyone.",

Roy explains his reason, but Roy is lying. Since Roy hears everything, he doesn't want to be bullied on the first day of school because he's hanging out with Yua.

"I'll be leaving you both alone. Bye.", Roy said as he waved them bye.

As Roy leaves, Roy sighs in relief, looking up in the sky briefly.

'I hope that is the last time I see the-'

"Hey! Wait up! We're coming with you whether you like it or not!", Yua shouted behind him.

"Fine....?", Roy responded with some confusion.

Roy can’t believe that such a person exists. Well, he learns something every day.

Roy would normally tell them to screw off but, he remembers that he's trying to change his ways. So, he tries to think of a way to get out of that hot seat he's in.