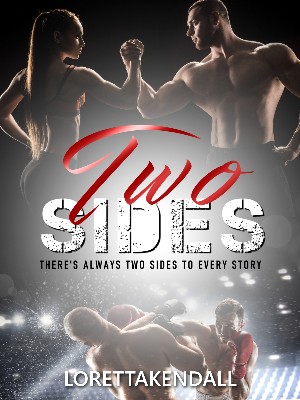 Author, Nikki Dumont, is a married woman struggling with domestic violence. Her former boxing champ husband is a local town hero for all the wrong reasons. She finds solitude in the one person she never expected. Her husband's ex-boxing rival, Reece Maddox steps in as a real hero while teaching her how to fight back. Nikki learns the meaning of unconditional love and true self-worth. (Warning: Steamy scenes, domestic abuse, adult situations. )

Nikki was sitting in the Dumont Insurance office working on the budget for a new marketing plan. Her estranged husband was outside her office schmoozing some rich client about life insurance. She rolled her eyes hearing his fake salesman laugh. If people only knew what a jerk Carson Dumont really was.

She had moved into her low-level apartment a couple of weeks ago after he allowed his ex-girlfriend to stay with them. Mercedes was a class A bitch and still had yet to come to terms that he was married to Nikki. Nikki didn't enjoy having to show up at work every day with him. Especially since they had been separated. She wanted to work on the marriage but wasn't sure if he felt that same. Why she was in a tiny rat-infested apartment on the west side, he was living the high life in their fancy East End mansion with his mistress, Mercedes. Carson claimed he and Mercedes were just old high school friends. In Nikki's eyes, she didn't understand who in their right mind would move in the ex-girlfriend to live with their wife? She couldn't prove it, but she felt like something wasn't right. She suspected that he had been cheating and not for the first time.

Nikki and Carson had not been happy for a while. Although not physically abusive, he was a bully. He made her keep the appearance of a perfect life and a perfect wife. He told her exactly how to walk, talk, and act. Even going as far as to tell her how to dress and making her stop her job as a writer and artist. Her once dream job as an author was now just a memory. He refused to have kids with her since he had children with his first wife. It was as if all her hopes for her future had vanished.

To the outside world, he was the famous ex Golden Gloves boxing champ. Everyone loved him. On the inside, he was selfish and demanding. She was a simple country girl, so she didn't get the whole boxing thing in the city that made him so popular. Mohamed Ali was the boxer that put Louisville, Ky on the map. To hear Carson tell it, he was the boxing hero of the town. Where she was from, it was basketball and football that ruled the popular crowds. Back home she was the nerdy bookworm. Although stunningly beautiful, she never was the socialite Carson wanted her to be. Long dark hair with dark brown eyes and a sweet smile. The perfect beautiful trophy wife to complete his illusions of a grand life.

She went back to her paperwork balancing the budget, ignoring him and his fake smile. A few minutes later she sat tapping her pen on her lips bored with her daily duties. She saw a blonde man walk in the front door. Ruggedly handsome with beautiful blue eyes and looked to be very fit.

She saw Carson yell gleefully to the man as if he knew him. She could see the man's face turned to anger for a split second. Nikki got up to go to the glass door of her office to see if she could hear the conversation. They were just talking about the man's car insurance. The man looked up to Nikki and gave a half-smile. She smiled back blushing, slightly waving. The man narrowed his eyes with a slight nod. Acknowledging her but not seemingly too interested.

Carson looked annoyed, "I will fix your damn car. Mercedes says it was an accident. I own a damn insurance company for gosh sakes. We are covered."

"I don't give a fuck what she says. She hit my car and took off. It's a fucking classic! I should go to the police but I'm trying to give you a chance to make this right."

Carson just laughed. Of course, he did. Pompous ass.

Shaking his head in amusement, "The car is a relic. We will fix your precious little junk heap. Don't worry pretty boy. Or we can work this out another way. You can get back in the ring with me a few rounds. Pull out those old gloves and fight me like old times."

"I don't fight anymore. I retired. I train fighters now," the man rolled his eyes.

"I heard. A waste of good talent if you ask me. But then again you were always a coward. Once I beat you in that street fight, you lost what fight you had in ya."

The man just glared at him. He had twice the size of Carson, muscle-wise. Nikki didn't understand why he would provoke this guy. The man looked as if he could rip him into shreds, even though his face looked innocent. The man bulked up and got in Carson's face clenching his fist at his sides.

Carson looked down seeing his fist and backed down.

"I just messing with you. Dude, relax. I'll fix your car. Send me your insurance info and we will fix it right up."

"Be sure you do. I don't want to have to come back here."

Carson walked away to smooth talk the next client who was insuring a luxury sedan. He headed to his office with his next client and shut the door. Carson was so fake it made Nikki sick. She didn't know why Carson always lived in the past. It always came back to his days as a boxer and the big Golden Gloves win. The night he got in a lucky KO and beat the best fighter in the league, Reece Maddox. His sworn enemy from the best boxing training center in the Midwest.

The man left as Carson came from his office to grab some paperwork.

Nikki stopped him, "Carson, who was that man?"

"Oh, him? That baby was the infamous Reece Maddox. Fucking loser. Still has his old shitty 1968 Dodge Charger. We have to fix some damage to it."

"Wait? Is that what happened to my BMW? Was Mercedes drunk when she was driving my car?"

Carson just ignored her and headed to his office. Nikki rolled her eyes as he walked away.

She went to the front door and watched as the man walked away. She looked back to see Carson closing his office door laughing at his own stupid jokes.

Nikki ran out catching up to the man. She just hoped things would go smoothly.