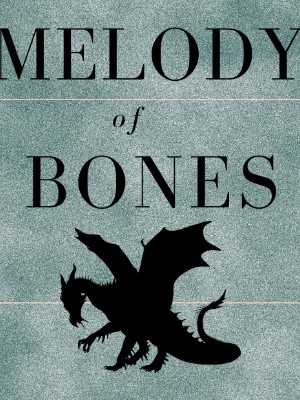 There's a dragon living under Mount Auburn Cemetery. Accused of murdering her husband, Prudence Alturas has endured exile among the dead for thirty years. There's only one problem: her husband isn't dead. Ashton Kane's incorporeal spirit remains bound to the pendent at her neck and together they wrestle with the mystery of the night he was cursed. When a vampire erupts from a borrowed grave, Pru must set aside her personal fight to go on the hunt. But something is different about this vampire and Pru's exile has shackled much of her power away. Forced into an uneasy alliance with a local detective, Pru finds herself confronted by secrets from her past that threaten an already tattered marriage. Can Ashton and Pru come together in time to stop the vampire before it eats its way through Boston? Or will Pru's secrets prove the final death for Ashton?

The graveyard was a mix of buds and blooms, with bright splashes of pink interrupting an otherwise dreary day. Beneath an old willow, standing with her bare feet half buried in muddy grass, Prudence Alturas reviewed her prison with a marked sense of unease. A patch of old headstones to her right had partially given up their vigil; they canted toward the ground at odd angles, looking like jagged, discolored teeth. Pru stared at their pitted, mossy surfaces for long moments and listened to the rush of water against stones and grass and leaves.

As far as prisons went, she supposed this wasn’t intolerable. The soil was fertile, and many of the trees had been imported from distant places, tenderly coaxed into living far from home by intelligent hands. Earth’s magic bubbled beneath her feet, vibrant with life and long memory, and she tried telling herself this would be enough to sustain her.

“I know that look,” said a man behind her.

She turned as her husband shimmered into view, his ghostly form warping with the misty rain. Pru took a breath. “Do you now?”

“That’s the look that says you want to blast through every car in Watertown,” Ashton said, flashing a wide smile. His image was paper thin but clear and she could see his Roman ancestry in the strong jaw and slightly bent nose.

The not-so distant blare of horns beyond the cemetery filtered into her awareness and she wrinkled her nose. “I was trying to ignore them, really.”

“An impossible feat, dearest. There are too many humans living on top of each other here. They’re going to be noisome.”

“It’s almost enough to make one miss the black plague,” she said.

Ashton tutted at her. “I know you don’t mean that.”

Sighing, Pru wiggled her toes and let mud squish between them. Of course, she didn’t mean it. Most humans were perfectly lovely, and she quite enjoyed their company. There were times she wished they remembered the value of silence, though. And they seemed to have lost their sense of community somewhere.

Rain continued to fleck down, soaking her blouse and hair, and the air was a confusing mix of warm and cold, spring battling winter for dominance. She concentrated on the sensations, listening to the wind as it rattled branches overhead, and fought to push memories away. But Maker help her, she couldn’t stop the yearning.

She missed Ashton’s touch. She missed the rumble of his voice under her cheek and the smell of his skin, or the sleepy way he used to trace lines across her lower back as they dozed in bed.

Back before he was cursed or killed. He insisted it was the former, that he could sense his body somewhere through the ethereal plane, and that all they needed to do was find it to prove her innocence. But the Council remained unconvinced.

There were days even Prudence was unconvinced. Days when she thought maybe she had killed him like the Council insisted. They called her unstable, said her link to fire made her unpredictable. The kinder dragons told her it was probably an accident, that she accessed her magic while they slept and incinerated Ashton. The crueler members of dragon society suggested far worse.

The investigation was ongoing. For thirty years now, it had been ongoing. Someone was supposedly trying to track down what happened that horrible night, but Pru suspected their attention was divided. The danaan were showing signs of uprising, grumbling under the oppressive rule the dragon council insisted on keeping. Scowling, she exhaled through her teeth and reminded herself for the billionth time that she had not killed Ashton. He was still alive, albeit incorporeal, and they were going to lift this curse if it cost her every ounce of magic she had.

Because she needed a distraction, she tried for a smile and said, “Shall we listen to a bone song? I spotted the grave of Mary Wilson the other day and I don’t believe we’ve heard her song.”

Ashton’s expression went suddenly distant, and his already transparent form blurred at the edges, a clear sign he was viewing the ethereal plane. “Mary Wilson… I see her.”

Pru nodded and closed her eyes so that she could concentrate.

A million voices sang out through the trees, each one absorbed from the remains buried here, but she was a practiced hand at bone songs. Tilting her head back, she let chill drops fleck onto her face and fell deeper into the magic. She focused on the rain, willing her magic to open and listen. A westward wind slanted flecks into her face, but other drops slid off the full green leaves high above. She felt the buzz of them coming, felt the little hairs on her neck and arms stand stiff as they splashed against her forehead and cheek. Each droplet burst to life on contact with her skin, forming images in her mind of rough streets and old buildings in their prime.

Magic and memory collided, and the cemetery faded away until all that was left was a tiny room with a table crammed against one wall and a little boy happily doodling with chalk. Beside her, Ashton filtered into view, appearing more solid here than he could in reality. He held out a hand and she took it, but it was not like truly touching. There was no sensation to it beyond a mild warmth, and she held back a sigh.

It was only an image, a memory of affection, and it took effort for her to concentrate on Mary Wilson. Bone songs did not narrate the entire life story of the deceased, they were more like a symphony highlighting the important points in their journey. And, of course, there was a music to it, but not like anything humankind would recognize.

This was deeper, a resonance that thrummed through her core and set her skin to tingling.

Another drop hit her cheek, sparking memories through her consciousness, images of ancient times and stone circles, and she inhaled sharply. Something was wrong; very wrong. She had not called further magic, and this was not Mary Wilson’s narrative. The song cut off and the little bedroom scene abruptly shifted. Steeped as Pru had been in 1894 Boston, it was disorienting to be thrust even further back in time and for a confused second the images blurred together.

“What is going on?” Ashton said.

“I don’t know. I’m not controlling it anymore.”

A horse-drawn trolley clopped through the center of a stone henge, disappearing in the next instant and leaving in its wake a series tall, slender stones that towered above her. Each finger of stone seemed to claw at the sky, as though a giant were emerging from the ground, desperate for air. At the center of the circle stood a flat boulder with a shallow basin. Trees fringed the clearing and she caught the scent of deep water before her vision focused on the stones themselves.

“If you’re not controlling this, who is?”

As she watched, the base of each stone split, leaving a jagged, gaping crack that seemed to race upward.

Pru swallowed, unease gnawing at her insides. The runes on her forearms began to itch and burn and she gasped.

“Pru?” Ashton asked from beside her.

She kept her eyes closed, letting his familiar voice calm and anchor her. “I am alright,” she said, clenching her fists because she refused to cover her arms, refused to touch and acknowledge the presence of the runes.

More drops fell, repeating the garbled images and she tried to concentrate. There were men and women in crude robes, each painted in warlock symbols across their arms and necks. She recognized the sharp, angular lines of a protection symbol, but it was repeated and alternated between upright and upside-down, which meant these warlocks were both warding off evil and warning against hidden danger.

There were other symbols, too old for her to recognize, which was a feat given her lifespan. And there was the circle again, its tall, irregular shape cutting across the horizon, pale stones ominous despite a clear blue sky.

“The circles are in danger,” Pru said.

She opened her eyes, blinking back rain until the cemetery was back in view.

She looked at her husband and tried to catch her breath. The magic had been far more intense than she had prepared for. Steam wafted from her forearms, and she finally looked at her prison tattoos as the golden glow began draining away. She hated the swirl and curve of each mark that marred her. Little by little the color leeched from the runes, returning them to their usual dull gray, and the pain receded.

Swallowing back a curse, Pru looked up at Ashton. Water and fog passed through his ghostly form, making him fade so that she could see the outline of several headstones behind him. He nodded down at her feet and she looked, startled to find red scales had begun accumulating around her ankles. She must have called on her dragon form subconsciously, reacting to the warning that still resonated from the tree.

So that was why the runes took effect. The Council could not have her changing into dragon form, not while she was condemned to exile.

With a controlled breath she commanded the change to cease, sending minerals back into the soil around them. It tingled as each scale detached and dissolved back to dust and she focused on that sensation, letting her mind settle into the familiar task so she could think clearly.

“Was that what I think it was?” Ashton asked.

She nodded. “A warning, from earth.”

“Are you sure? Have you ever had one before?”

Frowning, she rubbed at the rune on her left forearm. Earth had sent her small warnings before, directing her where humans were in danger so that she might protect them, but that always came in the form of a gut feeling or a scent on the wind. She had never experienced visions before. “No, not really,” she said. “But I’d stake my life on it. I didn’t sense any other magic at work, did you?”

He looked troubled. “Did you recognize which circle it was?”

“It’s familiar but there aren’t any land markers to be sure. And it’s odd somehow, not quite in place.”

Why was Earth giving her a warning? She was an exile, a suspected murderess no less. Whatever was going on, there was precious little she could do about it.

She rubbed at the rune on her wrist and scowled.