Home/ And Then They Were Three Completed 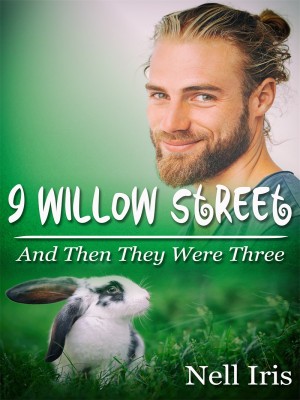 And Then They Were Three

Sequel to <i>9 Willow Street</i><br><br>Hannes and Mattis have been happily married and heartbound for two years when a tiny, one-eared rabbit shifter kit hops into their lives and seems reluctant to leave ...<br><br>This free story is a short glimpse into Hannes and bunny shifter Mattis' happily ever after.

“Hey, you’re back!” Mattis’ words are followed by a fond chuckle, and then, “Stop that, you rascal! Quit digging up all our carrots.”

Affection flashes in my chest, deep inside where I feel all Mattis’ emotions these days, after being his heartbound for over two years. And the wave of tenderness that follows, tells me exactly who he’s scolding.

Smiling, I take a last look at the herb beds where I’ve been crawling around for the last couple hours, jump to my feet, and go looking for Mattis and “the rascal.” I find them by the carrots. Mattis is sitting cross-legged on the grass, face set in a concerned expression, as our little visitor lies pressed to the ground. His only ear is pressed flat along his back and he’s so tense he’s trembling.

I plop down next to Mattis. He turns up his cheek to me, begging for a kiss. I indulge him, brushing my lips over his smooth skin and nuzzle my nose against his temple. With a happy hum, I turn to our little visitor.

The tiny, orphaned rabbit shifter, Vidar, keeps running away from the foster family in Mattis’ old warren he’s placed with, and always ends up here in our garden. Vidar is completely white and born with only one ear. He’s small for his age, and even though he’s reached and passed the age where most rabbits learn to control their shifts, Vidar is still unable to do it. His shifts are still random, and in general, he spends more time in his rabbit form than his human one. As an itty-bitty human boy with hair so blond it’s almost white and only one ear, he rarely speaks.

No one knows what happened to his parents, or even who they are. One day the warren woke up to a scared, sad little boy who told them his name was Vidar and that he was seven. Then he promptly turned into a rabbit and said nothing else, not turning back for days. When he finally shifted into his human form again, he only answered questions by shaking or nodding his head or shrugging.

No matter what they do or how they care for him, he doesn’t improve. The only time he’s not silent and tense is when he’s busy sneaking carrots from the garden or leaving teeth marks all over my herbs, and it has taken us a long time to get him to that stage.

He only ever shows up at our house in his rabbit form. As a human, he’s shy and timid and always does what he’s told, never causing any mischief. But as a little kit, he finds ways to slip away from the warren and hop his way to us.

Tenderness glows deep in my chest and I glance at Mattis, who’s watching the kit with a fond but worried smile. I fling my arm around his shoulders and pull him close, burrowing my nose into his hair and inhale his scent. Mattis hums and lays his hand on my leg, drawing patterns with distracted fingers as he never takes his eyes off our little visitor.

A twitch of the little rabbit’s body catches my attention.

At first, Vidar ran and hid underneath a bush whenever either of us spoke to him, as though he expected to be chastised, or maybe worse. But gradually he’s gotten used to us, and maybe learned to trust us a little, so these days we can talk to him without scaring him.

But I still gentle my voice and try to make myself smaller when I turn to him. “Hey there, kiddo. You know he’s not actually mad at you, right?” I point my thumb at Mattis, give Vidar a warm smile, and waggle my eyebrows. When Vidar’s nose twitches and his ear rises from his body the tiniest bit, my heart leaps in my chest. “He may be big and sound strict, but he’s just a big ole softie who wants to show you the tastiest carrots.”

Mattis pinches my butt hard,but out of the corner of my eye, I can see his encouraging smile.

“I would tell him to turn into a rabbit and show you where to find the best carrots, but he’d probably eat them all, and we don’t want that, do we?”

The kit’s chin raises a little until it’s no longer plastered to the ground.

“But do you want to know a secret?” I loud-whisper.

The little nose stops, as though Vidar holds his breath, waiting for what I’m about to say

“We grow enough carrots for both of you.”

“Look over there.” I lean forward and point to a random carrot. “That one’s the best. I promise. Go on. Dig it up.”

We both tense with anticipation as Vidar hops once and then pauses, eyes on me, waiting to see if I’m going to change my mind. When I don’t, he sets off toward the vegetable I pointed out, hopping faster than I’ve ever seen him do before, and starts digging with abandon. Now and then he stops and looks in my direction, but when I nod and smile, he continues.