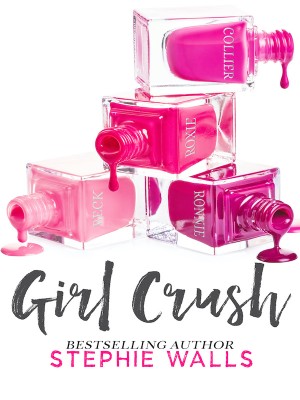 I was done. Done with men. Women say it all the time; they get fed up, throw their hands in the air, and vow a life of celibacy—until the next chiseled chest comes into view and then they’re foaming at the mouth and wiping the drool from their chins. But this was different, I really meant it. I’d been manhandled by the last pig that would ever bring his sausage near me. After one of the nastiest divorces in history, followed by some of the crudest and raunchiest dates, I’d decided to bat for the other team. …At least I tried. But creating the next Brat Pack hadn’t been on the agenda. Neither had my date’s brother, Collier West. And I wasn’t prepared for finding true love at the end of my gal-pal tryst. Girl Crush is created by Stephie Walls, an eGlobal Creative Publishing Signed Author.

"Do you want to come in?" The evening hadn't been spectacular. He'd used a coupon to pay for dinner at an already cheap restaurant, ordered us both water, and insisted we split an entrée. Skinny jeans on a man just didn't do it for me, and he wasn't fooling anyone with the way he combed his hair over the thinning spot near his forehead-but overall, he'd been pleasant. Minus the horrible clothing and bad hair, he appeared to be fit. He wasn't awful looking if I squinted in the right light-just a bit of a loser-and truth be told, my vibrator needed new batteries.

The only positive thing about my previous marriage was my ex-husband's ability to thoroughly satisfy me seven ways to Sunday. I held on to the relationship far longer than I should have, but women peaked later in life than men, and when I had a man who filled that void, it made up for a lot-especially when he was creative. I won't go into the depths of all I forgave, but let's just say it led me here to a single life where the likes of Justin were preferable to the sex god I'd willingly given up.

Never in a million years would I have thought getting a date, much less sex, would be difficult. Yes, I was approaching the dreaded four-oh but I didn't look a day over thirty, and I considered myself a catch. I was educated, had a job that paid well even if it was boring as hell, I had made out like a bandit in the divorce, and I remained easy on the eyes. Without kids to weigh me down, I was Kobe beef amongst a market full of prime choice. Over the years I'd been with my ex, I'd developed quite a sexual appetite, but now that I was hungry, there weren't any buffets serving dinner, and dessert seemed to be a thing of the past.

"Sure, that would be gnarly," he said, agreeing to come inside.

I rolled my eyes at Justin's use of the rather outdated word and hoped sex with him was anything but...gnarly. There had to be a masculine bone in there somewhere-I prayed to God I could find it by the time he got naked. But if not, I'd just turn off the lights and put a gag in his mouth, the equivalent of putting a bag over his head and silencing his horrific vocabulary, and ride him until I found my release. He wouldn't still be here in the morning, so I wouldn't have to regret the decision later.

"Can I use your bathroom?" He jerked his head the way skaters who had long bangs used to when I was in high school. Maybe he was trying to flip his comb-over out of the way. Clearly, he hadn't recovered from the eighties, and I wondered if his skateboard was in the trunk of his car or on his mom's front porch.

I tilted my head, contemplating his gesture longer than necessary, dumbfounded I'd managed to resort to men like Justin to get off.

"Giselle?" His calling my name jolted me out of my high-school-memory-induced haze.

"Oh yeah, of course. It must be all that water getting to you."

He nodded, clearly missing my stab at his cheap choice of beverages. I pointed in the direction of the powder room near the front door. As he strolled to the bathroom, I watched him cup his hand over his crotch and could only assume he was holding himself to keep from having an accident-or maybe he was trying to eliminate the camel toe his jeans formed between his legs. I hadn't had a drop of alcohol-there was no way I was seeing things. The guy had either picked a reverse wedgie or done the pee-pee dance in my living room.

While he took care of business, I turned to the kitchen. Even I wasn't desperate enough to get it on with Justin without some liquid courage. I didn't go for the skater type when they were considered "in," and it certainly wasn't my go-to as an adult. I grabbed the bottle of sambuca from my freezer and forewent the glass. After screwing the top off as quickly as possible, I chugged at least two shots, only stopping when I heard the toilet flush. I recapped the bottle, tossed it back into the freezer, and closed the door. There was no way in hell Justin was drinking. He would be leaving, and I refused to have his safety on my conscience-no driving while intoxicated...ergo, no drinking for Justin.

I ignored the fact the water in the sink never came on-and that he hadn't washed his hands-and offered him a seat on my couch. Dude wasn't going to be a guest in my bedroom, and the fewer objects he touched, the less I'd have to Lysol. Maybe hand sanitizer was a good idea. Then, we could get busy, and he could leave. I needed to pee now so our stint wasn't interrupted-the quicker the better, unless he managed to wow the hell out of me, but the way his jeans squeezed his sack, I wasn't hopeful.

"Make yourself comfortable. I'm going to use the restroom. I'll be right back." I stepped out of the living room and into the powder room-the one my guest had just used-and closed the door behind me, flipping on the light switch.

"You have got to be fucking kidding me." I couldn't believe my eyes. I huffed out an irritated laugh just before I lit Justin's ass up. "Hell no."

I came bursting through the door like a bat out of hell, and Justin looked like he'd just seen the devil incarnate. Noticeably stunned, and not as stupid as he appeared, he wisely didn't speak, but instead, watched me move past him and to the laundry room. I gathered a roll of paper towels and spray cleanser, and on my way back by the couch, pulled Justin up by the shoulder of his slim-fitting hairband T-shirt that went out with the nineties.

This guy was a hodgepodge of decades gone wrong.

"Giselle, what's wrong?" He trailed after me, stumbling on his own feet.

I flung the bathroom door back open just as Justin righted himself. We both stared at his artwork on my walls, my toilet, my floor, my rug, and the pedestal of my sink that was a solid three feet away from the bowl of the commode. My hands pushed the cleaning supplies into his chest, and as he awkwardly accepted them, I folded my arms across my breasts.

"I'll be damned if I'm going to clean up after a grown man. Clean up your own piss, and then get the hell out of my house."

Justin stared at me like I'd sprouted a second head, but when I cocked my hip and pursed my lips, he got to spraying.

"What the hell were you doing? Drawing our initials on the wall? I don't even want to know how you got urine on the sink."

Apparently, Justin wasn't used to being talked to in such a direct manner, but it also explained why he still lived at home...with his mother. A tidbit I'd learned at dinner that was not mentioned in his dating profile. This was all the confirmation I needed-it was Tinder from here on out. When he finished, he tried to hand me the soiled paper towels.

"You're kidding me, right?" I pointed toward the wastebasket. "You can put them in the trash yourself." I snatched the cleaning supplies from him, and the moment he chucked the mess, I escorted him from my home. I might have growled when I closed the door behind him.