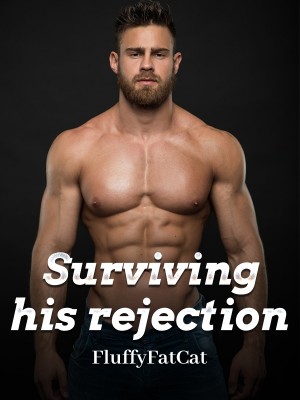 After the cruel rejection by his mate, Noah Cheong had to struggle to survive the series of misfortune that followed him. *** Noah Cheong, a naïve hybrid of werewolf and human, disguises himself in the human world as a normal pastry chef. One day, his ordinary life turns upside-down, after he finds out that his soulmate is the future Alpha of Silvermoon pack, the strongest pack in New York City. Disgusted by his soulmate, the notorious fighter and womanizer, Drake Silvermoon, rejects Noah on-site and then walks away. Unfortunately for Noah, his suffering doesn't end there. As long as the thread of fate that connect Noah to Drake remains, Noah will always be tortured with a painful agony whenever Drake cheats with another woman. So Noah's main objectives were to sever his connection with his soulmate and then choose either to be mated to a mere human or another werewolf. However, Drake Silvermoon soon realizes his mistakes as his feelings toward Noah grows stronger, even though he's not into men. Will Noah forgive his cheating soulmate and end up together with Drake Silvermoon or could Noah find a new soulmate who willingly accepts him for whoever he is?

Noah Cheong is an orphan from a small village in Daesong dong, South Korea. He came as a refugee to the USA at the age of 18, as he fled from his pack. The pack that despised him, due to the sin of his parents, and the pack wanted him dead.

As Korean-American, Noah lived safely and happily with his American grandmother in California. She was his mother’s mother. She gave Noah all the love and the attention he needed. She hoped that Noah could grow like a normal human child, filled with love and joy.

She also taught him how to speak English properly, the way of American cultures, western table manners, even her family secret recipes, which mostly are cakes and pies.

As he grew, he became interested in cooking and trained to be a great cook. Thanks to his werewolf‘s smelling ability, he could choose and mix spices and ingredients precisely. His grandmother admired his gift and advised him to enroll in the culinary academy and he did.

After three years of study, he graduated from the California Culinary Institute of America with honor. Soon after that, his beloved grandmother passed away.

, and pursued a career in culinary. He became a pastry chef in Silverplate restaurant. It was a 5-star restaurant owned by the Silvermoon family, the richest and the most powerful in NYC.

It was Monday morning in New York City, a young man ascending the stairs of the Park Avenue subway entrance. When he arrived at the top, he smiled a little, welcoming the fresh air and sunlight that caught on his fair skin. He has silky black hair, matched to his black suit jacket. He has an average height, 5’4 feet tall and his name was Noah Cheong.

He saw his watch then hurried his steps, he only had 45 minutes left not to be late for work. In fact, it only took 15 minutes to arrive at his workplace; but he had a habit to come 30 minutes early.

Some young women, who were just passing by, looked at Noah with awe. “Wow, he looks so cute,” whispered the woman in red formal dress to her friends and they seemed to approve. They giggled and walked away.

‘They seem charmed by your look, Noah,’ his inner wolf Ruiz speaking into Noah’s mind. Ruiz was prideful, elegant, and wise. He has snow-white fur with beautiful colored blue eyes, like a glowing orb.

‘They are not my mate Ruiz,’ Noah replied. ‘We're supposed to mate with a werewolf, remember? I want to see you be happy.’

‘I actually don't mind,’ Ruiz answered with a teasing tone, ‘our mate probably still in Korea and happily mated with someone else. You should pursue your own happiness Noah, you are already 21 years old and single. Are you not ready to mingle?’

Noah didn’t reply, he just gave Ruiz a bitter smile. He only wanted the best for Ruiz, because he cared so much for him. Ruiz's happiness is his happiness. He couldn't survive the pursuit of his pack in Korea if it’s not because of Ruiz's guidance.

He clenched his fist when he remembered the tragedy. It was his eighteenth birthday, the day he was supposed to be crowned as the alpha of the future Cheong pack, the day when Ruiz was born, and the day when his uncle became a traitor. He assassinated Noah’s parents and was planning to kill Noah next. Fortunately for Noah, Ruiz saved him; as it transformed Noah to be a werewolf for the first time and ran.

Since then, his uncle became the new Alpha of Cheong pack and Noah became a rogue. The new alpha ordered his pack to hunt him down; he even put a bounty on Noah’s head.

Noah was lonely and his only hope for happiness right now was to find his mate and live happily ever after. He always prays to the Moon Goddess that he could meet his mate soon…

And the Moon Goddess granted his wish.

In the middle of the crowd, when you can see large LCD screens advertising various products, street vendors serve the customers, and people walk like there were no tomorrow, Noah accidentally stumbled with the most handsome man he has ever seen. He has a Greek god’s muscular body; with 6’7 Ft. high, long wavy dirty blond hair and blue piercing eyes. He wore a black T-shirt and dark jeans, even though it's common clothes for New Yorkers, Noah could be recognized by the way it flowed and shaped on his body, it was expansive branded items, but he couldn't point out which one. Noah was clueless about their lavish lifestyle since he was an orphan and lived on a tight budget.

The man's scent was sweet and musky, an ecstasy on his mind, and filled the perversion to his thought.

‘It was him, Noah, he is our mate!’ his inner wolf Ruiz was screaming in Noah’s mind joyfully.

‘I know…’ Noah replied, ‘finally… Ruiz…we can find our happiness.’