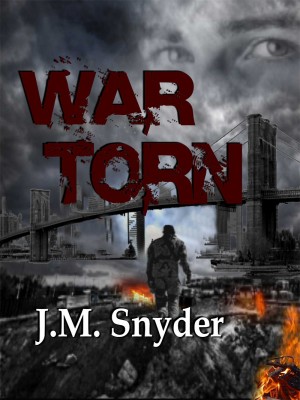 In a not too distant future, the island of Manhattan has been commandeered by rebels aided by terrorists who have set themselves against the U.S. government. The Brooklyn Bridge, now fallen into disuse, stands as a sort of "no-man's land" between the island and the military that patrol the Hudson River. When the rebels bomb the Bridge, the nation is plunged into what might become a second Civil War.<br><br>Captain Jace Rickert is a grounded pilot whose Army lover, Second Lieutenant Tomas Tait, is sent on a routine reconnaissance mission. When Tait disappears and the military can’t stop the impending war to find one missing soldier, Rickert takes matters into his own hands.

It’s after midnight when he comes in.

I hear him open the door downstairs, just a thin squeak in the

darkness, and I glance at the clock as he walks up to my room with

and for a moment I see him, a dark silhouette against the night,

before he comes into the room and closes the door behind him. He’s

as quiet as he can be, slipping out of his fatigues, his nude skin

glowing with a faint luminescence in the dark—he’s beautiful. A

It takes all I have not to call him to

me; he’ll ease between the sheets and press up against me soon

enough, and I don’t want to scare him if he thinks I’m asleep. His

body is warm when he curls into me, his hands cool because it’s

chilly outside, but he slips his fingers between my thighs to warm

them up as he snuggles close.

breathy sigh where he kisses my ear.

“I was afraid you weren’t

I’m surprised it took him so long to

get away. His platoon assembled at 22:00 hours and I didn’t think

it would take half the night to be briefed. Turning in his arms, I

kiss his cheek. “What’s going on?”

Here in my bed, he’s not a second

lieutenant in the 49th but mine, and no one sees him cuddle against

my chest. Here he’s nothing but a boy fresh out of ROTC who used to

have long wavy hair before the Army shaved it all off, a boy I met

during what should have been a routine flight and wasn’t, a boy I

love without regret. When he comes through my door, he leaves the

soldier in him behind at his barracks with the rest of his platoon.

Here he’s nothing but mine.

the short growth of hair along the curve of his jaw. That will be

gone in the morning when he shaves. “What’s wrong?”

He sighs, a sad sound that pierces my

soul. It tells me he has to go into the field for a few weeks, or

returns. I hear nothing good in that sigh; there’s too much talk

about an impending war with the rebels in the City, too many

skirmishes on the Bridge. Wherever they’re sending him, I don’t

want him to go. Nuzzling against my neck, he breathes, “I don’t

want to go, Jace. I want to stay here with you and I never want to

I’m stuck behind a desk, and in the eyes of the commander we

shouldn’t even be together, but I love you too much to let you go.

Because we’re just regular GI Joes—we do what they say, do or die,

and until we’re both discharged, that’s all we’re ever going to be.

turning. They don’t care that you’ll lie awake sleepless beneath

the stars and ache to hold me. We’re just numbers on paper they

move around in their games of war. That’s all we’ll ever be to

everyone but each other.

But he knows this and I don’t need to

remind him. So I pull him close and smooth my hands along the

furrows in his brow. My lips brush his cheek, finding his damp

mouth, and I can feel the pout as I kiss it away. “Can you talk

about it? Or is it classified?”

He shrugs, settling closer against me.

I hear the haunted fear in his voice.

He’s trying to convince himself as much as me. Just routine…

“We leave at dawn, the whole 49th. Peace-keeping duty at the

He must feel me stiffen because his

arms encircle my waist and hug me tight. “I’m scared.” His voice

sounds small, almost child-like in the dark. “You know what they

say about the Bridge, and there’s talk around base of an air

strike, have you heard that? I don’t want to leave you and I don’t

know when I’ll get back…what if something happens? What then?

I silence his questions with an

insistent kiss, pushing him back against the pillows as I roll on

top of him. He’s so warm beneath me, so alive. My body responds to

his hungry touch, our hands stroking until we’re both hard and