Home/ The Beetle: A Mystery Completed 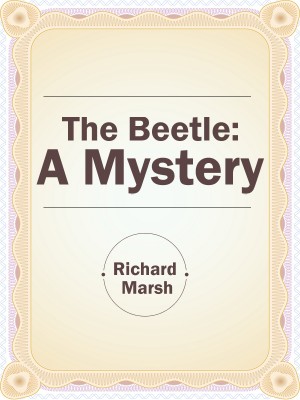 The Beetle: A Mystery

He banged the door in my face.

That was the final blow.

To have tramped about all day looking for work; to have begged even fora job which would give me money enough to buy a little food; and tohave tramped and to have begged in vain,--that was bad. But, sick atheart, depressed in mind and in body, exhausted by hunger and fatigue,to have been compelled to pocket any little pride I might have left,and solicit, as the penniless, homeless tramp which indeed I was, anight's lodging in the casual ward,--and to solicit it in vain!--thatwas worse. Much worse. About as bad as bad could be.

I stared, stupidly, at the door which had just been banged in my face.I could scarcely believe that the thing was possible. I had hardlyexpected to figure as a tramp; but, supposing it conceivable that Icould become a tramp, that I should be refused admission to that abodeof all ignominy, the tramp's ward, was to have attained a depth ofmisery of which never even in nightmares I had dreamed.

As I stood wondering what I should do, a man slouched towards me out ofthe shadow of the wall.

'Says it's full, does 'e? That's the lay at Fulham,--they always saysit's full. They wants to keep the number down.'

I looked at the man askance. His head hung forward; his hands were inhis trouser pockets; his clothes were rags; his tone was husky.

'Do you mean that they say it's full when it isn't,--that they won'tlet me in although there's room?'

He broke into a volley of execrations.

'Why, give 'em another rouser--let 'em know as you won't be kidded!'

I hesitated; then, acting on his suggestion, for the second time I rangthe bell. The door was flung wide open, and the grizzled pauper, whohad previously responded to my summons, stood in the open doorway. Hadhe been the Chairman of the Board of Guardians himself he could nothave addressed me with greater scorn.

'What, here again! What's your little game? Think I've nothing betterto do than to wait upon the likes of you?'

'I want to be admitted.'

'Then you won't be admitted!'

'I want to see someone in authority.'

'Ain't yer seein' someone in authority?'

'Then you won't see the master!'

He moved the door swiftly to; but, prepared for such a manoeuvre, Ithrust my foot sufficiently inside to prevent his shutting it. Icontinued to address him.

'Are you sure that the ward is full?'

'Which is the next nearest workhouse?'

Suddenly opening the door, as he answered me, putting out his arm hethrust me backwards. Before I could recover the door was closed. Theman in rags had continued a grim spectator of the scene. Now he spoke.

'He's only one of the paupers,--has he any right to act as one of theofficials?'

'I tell yer some of them paupers is wuss than the orficers,--a longsight wuss! They thinks they owns the 'ouses, blimey they do. Oh it'sa----fine world, this is!'

He paused. I hesitated. For some time there had been a suspicion ofrain in the air. Now it was commencing to fall in a fine but soakingdrizzle. It only needed that to fill my cup to overflowing. Mycompanion was regarding me with a sort of sullen curiosity.

'Done much of this sort of thing?'

'It's the first time I've been to a casual ward,--and it doesn't seemas if I'm going to get in now.'

'I thought you looked as if you was a bit fresh.--What are yer goin' todo?'

'How far is it to Kensington?'

'In the Fulham Road. Kensington's only a small place, they do you wellthere, and it's always full as soon as the door's opened;--you'd 'avemore chawnce at St George's.'

He was silent. I turned his words over in my mind, feeling as littledisposed to try the one place as the other. Presently he began again.

'How are you going to manage it,--have you got any money?'

'How are you going to get a bed then?'

'Ow am I going to?--why, like this way.' He picked up two stones, onein either hand. The one in his left he flung at the glass which wasover the door of the casual ward. It crashed through it, and throughthe lamp beyond. 'That's 'ow I'm goin' to get a bed.'

The door was hastily opened. The grizzled pauper reappeared. Heshouted, as he peered at us in the darkness,

'I done it, guvnor,--and, if you like, you can see me do the other. Itmight do your eyesight good.'

Before the grizzled pauper could interfere, he had hurled the stone inhis right hand through another pane. I felt that it was time for me togo. He was earning a night's rest at a price which, even in myextremity, I was not disposed to pay.

When I left two or three other persons had appeared upon the scene, andthe man in rags was addressing them with a degree of frankness, which,in that direction, left little to be desired. I slunk away unnoticed.But had not gone far before I had almost decided that I might as wellhave thrown in my fortune with the bolder wretch, and smashed a windowtoo. Indeed, more than once my feet faltered, as I all but returned todo the feat which I had left undone.

A more miserable night for an out-of-door excursion I could hardly havechosen. The rain was like a mist, and was not only drenching me to theskin, but it was rendering it difficult to see more than a littledistance in any direction. The neighbourhood was badly lighted. It wasone in which I was a stranger, I had come to Hammersmith as a lastresource. It had seemed to me that I had tried to find some occupationwhich would enable me to keep body and soul together in every otherpart of London, and that now only Hammersmith was left. And, atHammersmith, even the workhouse would have none of me!

Retreating from the inhospitable portal of the casual ward, I had takenthe first turning to the left,--and, at the moment, had been glad totake it. In the darkness and the rain, the locality which I wasentering appeared unfinished. I seemed to be leaving civilisationbehind me. The path was unpaved; the road rough and uneven, as if ithad never been properly made. Houses were few and far between. Thosewhich I did encounter, seemed, in the imperfect light, amid the generaldesolation, to be cottages which were crumbling to decay.

Exactly where I was I could not tell. I had a faint notion that, if Ionly kept on long enough, I should strike some part of Walham Green.How long I should have to keep on I could only guess. Not a creatureseemed to be about of whom I could make inquiries. It was as if I wasin a land of desolation.

I suppose it was between eleven o'clock and midnight. I had not givenup my quest for work till all the shops were closed,--and inHammersmith, that night, at any rate, they were not early closers. ThenI had lounged about dispiritedly, wondering what was the next thing Icould do. It was only because I feared that if I attempted to spend thenight in the open air, without food, when the morning came I should bebroken up, and fit for nothing, that I sought a night's free board andlodging. It was really hunger which drove me to the workhouse door.That was Wednesday. Since the Sunday night preceding nothing had passedmy lips save water from the public fountains,--with the exception of acrust of bread which a man had given me whom I had found crouching atthe root of a tree in Holland Park. For three days I had beenfasting,--practically all the time upon my feet. It seemed to me thatif I had to go hungry till the morning I should collapse,--there wouldbe an end. Yet, in that strange and inhospitable place, where was I toget food at that time of night, and how?

I do not know how far I went. Every yard I covered, my feet draggedmore. I was dead beat, inside and out. I had neither strength norcourage left. And within there was that frightful craving, which was asthough it shrieked aloud. I leant against some palings, dazed andgiddy. If only death had come upon me quickly, painlessly, how true afriend I should have thought it! It was the agony of dying inch by inchwhich was so hard to bear.

It was some minutes before I could collect myself sufficiently towithdraw from the support of the railings, and to start afresh. Istumbled blindly over the uneven road. Once, like a drunken man, Ilurched forward, and fell upon my knees. Such was my backboneless statethat for some seconds I remained where I was, half disposed to letthings slide, accept the good the gods had sent me, and make a night ofit just there. A long night, I fancy, it would have been, stretchingfrom time unto eternity.

Having regained my feet, I had gone perhaps another couple of hundredyards along the road--Heaven knows that it seemed to me just then acouple of miles!--when there came over me again that overpoweringgiddiness which, I take it, was born of my agony of hunger. Istaggered, helplessly, against a low wall which, just there, was at theside of the path. Without it I should have fallen in a heap. The attackappeared to last for hours; I suppose it was only seconds; and, when Icame to myself, it was as though I had been aroused from a swoon ofsleep,--aroused, to an extremity of pain. I exclaimed aloud,

'For a loaf of bread what wouldn't I do!'

I looked about me, in a kind of frenzy. As I did so I for the firsttime became conscious that behind me was a house. It was not a largeone. It was one of those so-called villas which are springing up inmultitudes all round London, and which are let at rentals of fromtwenty-five to forty pounds a year. It was detached. So far as I couldsee, in the imperfect light, there was not another building withintwenty or thirty yards of either side of it. It was in two storeys.There were three windows in the upper storey. Behind each the blindswere closely drawn. The hall door was on my right. It was approached bya little wooden gate.

The house itself was so close to the public road that by leaning overthe wall I could have touched either of the windows on the lower floor.There were two of them. One of them was a bow window. The bow windowwas open. The bottom centre sash was raised about six inches.