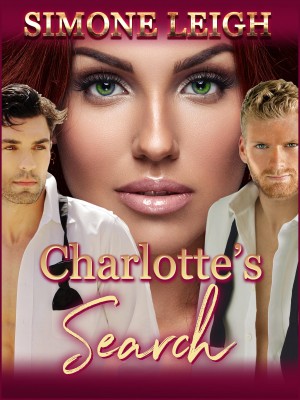 With a gasp, I rear up, blinking into darkness.

Beside me in the bed, my flame—haired mermaid, safe and sound, sleeps peacefully. Beyond her: Michael, his chest rising and falling in the steady rhythm of sleep.

But I'm drenched in sweat, my heart hammers behind my ribs and my breathing snatches. And the wound in my thigh throbs a slow, heated beat.

And for the first time, the memory surfaces, how I took the wound: Corby, his gun trained on Charlotte. Michael, flinging himself bodily at the gunman in a desperate bid to prevent the shot. And looking for refuge, finding none, I seize her, shielding her with my body….

I check the time; it's hours after midnight; getting late enough almost to be early.

I have no desire to sleep, to risk being dragged back into that nightmare.

Swinging out of bed, I snag a robe and pad downstairs to the kitchen. The renovations are all but complete now and the house is cosy and comfortable. We moved out of the annex we first occupied a couple of weeks ago, but I still haven't grown used to the feeling of 'home' here.

I understand why Charlotte so yearned for a home of her own. Dispossessed for most of her life, with nothing to call her own, this has been Michael's gift to her, the most precious thing he knew how to give to her, and he has put heart and body and soul….

…. Not to mention a thumping great mortgage….

…. Which he can barely afford….

But for myself too, it has become home. Divorced so many years ago now, from a marriage which I never understood at the time was so unsuccessful. Only when I met my Jade, did I truly understand what it meant to be bonded with another.

And I would do anything for her….

In the kitchen, the homely activities of grinding beans, putting the coffee—maker on the hob, calm me….

…. calm me enough that I begin to think clearly about the memory that has just re—emerged. Everyone has told me how I was injured, that I placed myself in the path of the bullet intended for Charlotte, but it felt like a story or a news report; something that happened to a stranger. A tale from the tv or social media perhaps.

And my stomach clenches at the memory of that searing moment before I lost consciousness.

I squeeze my eyes tight—closed, trying to exorcise the thought, then the aroma of the coffee invades my nostrils and reality returns.

I take a couple of large gulps of the brew I deliberately made abrasively strong, then mug in hand, I head outside, inhaling sweet steam as I walk.

The night is an iced hush; early Spring, with the air cold enough to steal my breath to curling clouds and with the kiss of frost on the ground. But a golden wedge of moon casts over the lake far below and the water is full of stars.

And slowly, my heart and breathing slow, and I grow still inside.

Richard joins me in the kitchen, peering over my work surface and hob where onions and mince sizzle with the spices. "What are we having?"

"I'll rephrase that. Do you mind if I join you? It's getting a little heated in there."

"Join me by all means." I nod across to the bottle. "Help yourself to a drink. Problem?"

Richard examines the label, Hmmms, then pours himself a glass of wine. "Um, not a problem exactly. But I think when Michael accepted my investment in his spa hotel, he thought I'd be a sleeping partner."

"If you recall, I had the investment made in Elizabeth's name, and she definitely wants to have an input."

I pause in the middle of chopping chillies as the humour of this creeps over me.

Of course, he's used to running everything himself….

When I invested in his business, I was a silent partner….

But Beth wants to be involved….

I chuckle, rubbing at the side of my nose, then immediately regretting it….

Quickly I wash hands then pour a little oil on a paper towel. Eyes watering, I dab at my face, trying to rub away the chilli oil as Richard watches in silent amusement.

Then, "Sure you don't want any help?"

Tipping beans and chillies in with the meat and onions into the pan, I glug in tomato puree and the rest of the wine, then clap the lid on tight. "That'll be ready in a couple of hours."

I grin. "Let's see how Michael's bearing up under the strain, eh?"

He looks a bit spaced out. Sitting over a table—top of rosters and timetables, he says doubtfully. "We've never done anything like that before, Beth."

"And that's a reason for not doing it now?" The normally placid Beth sounds almost strident.

Michael turns for support. "What do you think, Charlotte?"

He doesn't get it. "Sounds like a great idea to me," she says, nodding brightly. "The boxing I used to do gives you a really good workout, and at the end of it you know a bit about how to look after yourself."

"But…. Self—defense?" Michael rakes through his hair. "It doesn't sound like the kind of thing your friends would want to do, Beth."

She shrugs, unimpressed. "You might be surprised. Most women would like to be able to at least have a shot at protecting themselves. But somehow, it's not always seen as something they should work at."

"That's because it's our job," protests Michael. "That's what men are here for. To protect the women they care for."

"And if you're not around?" Beth's look is pointed. "At the risk of stating the obvious, it was a woman who got me out of trouble last time." She rolls her eyes to Charlotte.

Michael holds up his hands. "Okay, you win. Self—defense classes go on the roster. But I'll have to find some extra staff first. I have no—one trained in anything like that…."

Richard stirs next to me. "Why not use Charlotte?" His face is suspiciously straight. "You'd be willing to help wouldn't you, Charlotte?"

Michael gives him a hard stare, but our mermaid returns one of her jade—eyed smiles. "Of course I would. What are we talking about? A couple of hours a week to get it off the ground? And take it from there?"

"Sounds about right," agrees Beth. "That's settled then." She turns back to Michael. "So, if we fit it in here in the morning…." She taps at a spot on the timetables with one long, immaculately painted nail…. "…. That would leave the later parts of the day for them to lunch first, then have sauna and spa, massage and all the rest of it. And we'd get them in for the whole day instead of just half a day. All else being equal, that should bring in twice the money."

Michael chews a lip, nodding slowly. "You've thought this through, I can see."

Richard claps a hand on his shoulder. "You might remember that Elizabeth's original role in my company was as a trainee in Business Studies."

Not just a pretty face….

Memo to self: never underestimate a woman just because she's attractive.