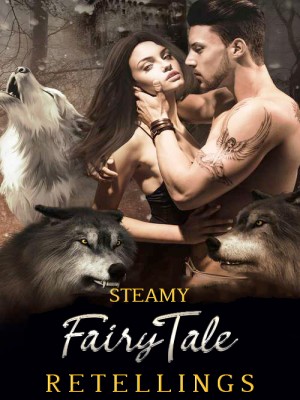 Scarlet, a healer, lives nestled in the forest surrounded by humans on one side and wolves on the other. But when a rogue wolf attacks her, she's rescued by another pack and taken deep into their den to perform her healing magic on an injured Alpha. The wolves in the forest are under threat from a mysterious affliction, and Scarlet is the only hope they have left. Faced with a mixed pack of threatened shifters, Scarlet must use her wits and magic to survive and unravel the strange affliction now affecting the wolves... All while trying to navigate an overpowering attraction to not just one, but three of the Alphas.

"Scarlet, get a look at him." Bee nudged me in the ribs.

I gritted my teeth, my hands juggling the jar of chamomile I'd just pulled off the shelf. "For the love of wolfsbane."

Honestly, Bee had the boniest elbow in all the seven realms of Haven. No matter how often I protested, she insisted on jabbing me right in the side every time she had something to say. Her idea of grabbing my attention wasn't tapping my shoulder but inflicting pain. I twisted around and my gaze flew through the arched windows of my store, Get Your Herb On.

A huge man marched out of the woods, arms swinging in an over—exaggerated motion. His chest stuck out, and with his chin high, I had him figured out in two seconds flat. I'd seen so many of his kind leaving the priestess's palace. Guards, full of cockiness and attitude, taking what they wanted without paying for goods.

Yet he wasn't wearing a uniform, but the strangest clothes. A gray tunic falling to mid—thigh; no pants or boots. Goddess, his legs were the size of tree trunks.

"Who wants to bet his muscles aren't real?" I said. I'd heard of people using magic to enhance their physique. It was the latest trend in other territories.

Bee glanced at me with disbelief pinching her expression. With her braided red hair and ivory skin, most called her beautiful and always referenced her green eyes. But the real Bee was also tough. I'd once seen her scare off a bear with a glare, and there was a reason most in town kept their distance from her. Sure, it might have a little something to do with Bee insisting most of the folk were uneducated swine breeders—her words, not mine—but hey, she was a best friend who often popped into my store, and I loved her company. Even if she didn't know when to keep her mouth shut.

"How can they not be real?" Her gaze turned from the man and back my way. "He's not wearing pants. What could he possibly be padding—" Then her eyes widened, and her lips curled upward into a wicked grin. "You filthy girl, Scarlet. Never knew you had it in you." She whacked me in the arm, her strength intimidating, considering she stood five—foot—two and reached my nose.

"What are you talking about?" I slouched, a hip pressed against the counter, and pushed several sample bowls of tea leaves up against the ceramic cups that I had painted with different stages of the moon cycle. I called them my night collection series and regular customers tended to buy a new one whenever they purchased their regular healing herbs. If I had more time, I'd paint all the time.

"You're referring to his dick, aren't you? And well…" Bee glanced outside. "With the wind blowing against his clothes, there's definitely a healthy package in his arsenal." Bee wiggled her eyebrows and broke out laughing.

Fire scorched my cheeks. You'd think I'd be used to Bee's dirty mouth; after all, this was normal for her. "I wasn't talking about his… his privates."

Bee gripped her hips, cinching in the long blue tunica dress she wore. The outfit had a V—neckline and tiny buttons ran down the front. I admired her flowing sleeves, and I needed to re—examine my wardrobe. My black pants and sea—green blouse beneath the leather vest with a belt made me look more like a thief. But when I chose my clothing, I prioritized comfort. Most days, I lifted boxes at work and a skirt would get in the way.

I rolled my eyes. I had no issues with such words… As long as I didn't say them. I blamed my grandma, who'd brought me up strictly, no cursing or vulgarities. Heavens bless her soul.

A squeaky male's voice came from behind Bee. "Eww." Santos walked out of the storage room carrying several boxes. "I can hear you out the back. That's called sexual harassment of men."

I sighed, loathing that Santos had heard our conversation, and Bee spun toward my eighteen—year—old apprentice. But he might as well be fourteen with his thin frame, shaved hair, and his maturity level. Then again, were Bee and myself any better?

Santos set the three boxes of tobacco leaves on the end of the counter. "You two are too old to talk about such things, and it's gross."

"Old?" Bee's voice climbed. "We're only a year older than you." She turned to me with a cocked eyebrow, expecting me to say something. I shrugged my shoulders.

"That's okay, Santos," I said. "We'll curb our tongues if it makes you uncomfortable." He worked his butt off, and I didn't need him leaving. He'd been working for me for a year and had just learned the names of all the dried plants we sold.

"It's fine." He didn't glance our way and instead opened the first box and scooped handfuls of tobacco into tiny satchels.

I marched to the opposite end of the counter. Bee followed me, probably ready to offer one of her smartass comments about Santos, but I jumped in first to change the direction of the conversation. "How come you're not wearing your new boots? The ones I got you for Christmas?"

Bee huffed. "Can't get them dirty, as I plan to wear them to the town ball. Might attract myself a prince in disguise. Besides, you live in the woods with lots of mud and—"

We all glanced up to find Mr. No Pants bursting into the shop with a flurry, his breaths labored and his cheeks red.

The newcomer's attention fell on the three sets of eyes on him… mine lowering to his legs, and even with his tunic covering, he had a huge package. But I focused on the red bleeding through his tunic at his hip. How had he gotten injured? Animal attack?

At once, Mr. No Pants straightened his posture and flicked his raven hair over a shoulder, his sights sliding from me to Bee, then locking on to her curvy chest.

Okay, he was a womanizer. Score another point for Bee against Santos in the women versus men chauvinist race. The newcomer could at least have had the decency to keep his eyes above neck level.

Bee pulled the elastic free from her braid and fluffed out her hair. Typical. I nudged her and raised my eyebrows.

"Geez, live a little, Scarlet," she whispered. "You've been too sheltered."

I tucked a lock behind an ear. "Brown as a deer," my grandma had once called my hair. Nothing sexy about that. Maybe the reason I never got a man's attention was I stayed too safe.

My sights fell on the newcomer's blood. Was it a human who had shot him with a bow and arrow? I rounded the counter. "Are you all right?"

He stood at least six feet, with a solid square jawline, studying me as if I might be an animal he'd crossed paths with in the woods.

"You're injured," I continued.

The man didn't say a word, but scanned the room, and then looked out through the windows behind him. "I'm wonderful." Yet he stood there, a trickle of blood rolling down the side of his leg from under his tunic.

"Don't think so," Bee blurted out. "Unless you're a mutant who bleeds instead of sweating, you're about to dirty up Scarlet's floor."

He stared at me, and a brush of desperation shifted behind his eyes. The kind I'd seen when I'd first met Santos over a year ago, when he'd been sleeping on the streets, thin and pasty. Sometimes asking for help was the hardest thing to do.

"Come," I said. "We have a room out back, and I'll bring you hot tea to calm your nerves." I surveyed the dirt road outside and the woods in the distance for anything suspicious. My shop was located in the forest on the fringe of civilization, so I often saw strange things. But it was all clear.

A few weeks ago, in the middle of the night, another buff man with no shirt had turned up on my doorstep asking for specific plants for healing someone gravely ill. Before that, another man had been at my door, his clothes torn and his butt exposed.