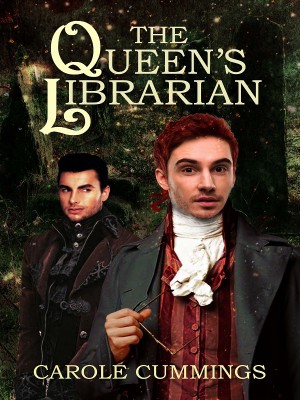 All Lucas Tripp wants is good weather for the upcoming harvest, suitable matches for his six older sisters, a little money leftover at the end of the month, to never ever come within brushing distance of ascension to the throne, and more quality time with Alex. That’s not so much to ask for, right? Oh, and for his dog to listen to him. And for his cat to stop plotting against him. And for his mother to stop being disappointed in him. And for his sister Clara to someday forgive him for stealing Alex away from her. Not that Lucas did that! When Clara’s new suitor suddenly disappears, Lucas is drawn into an adventure of a lifetime—kicking and screaming all the way. Magical beings traipsing through portals, missing princes, breaking and entering, suspicious magicians, and arsey cousins doesn’t really cover the rest of it, but give Lucas time; he’ll come up with more. The Queen's Librarian is created by Carole Cummings, an eGlobal Creative Publishing Signed Author.

LICKING ALEX right now, Lucas supposed, while a very good idea, was perhaps not terribly wise. One, Lucas would have to stand up and make his way across the pub's floor to the billiards table where Alex was currently pantsing young master Declan Slade, and the walking part wasn't exactly a given, considering the standing-up part was in serious question. And B, Lucas probably shouldn't just go about licking people in public places. They might start to expect it of him. Alex probably wouldn't like it if Lucas went about licking anyone who asked. Not that anyone else besides Alex *would* ask Lucas to lick them. Anyway, no one else could possibly taste as good as Alex, so Lucas decided making free with it was probably not in his best interests.

He also decided he was very drunk.

"Here, let me top that off for you." Parry's offer came with a grin that wasn't to be trusted, but it also came with more dark ale, so Lucas set his trust issues aside. "After all," Parry went on, pouring from the pitcher slowly, so as to keep the foam to a minimum, "it's a celebration, innit?"

Lucas bobbled a nod, mumbled an agreeable, "Celebration," just saving his spectacles from taking a swim in his ale, and shoved them more firmly up the bridge of his nose. Ah, maybe he wasn't so drunk after all; he could see much better now. He raised his flagon to Parry then waved it vaguely over in the direction of Alex and Slade. "God bless good Declan Slade and the--" *and* the purse he brought with him, Lucas almost said, but managed to cut it off in time.

Parry was looking at Lucas with eyebrows raised, waiting for him to finish. Lucas answered with a grin and sucked down half his ale.

One good thing about being a sloppy drunk: people didn't really expect you to make much sense. Lucas should get drunk more often, he decided. Maybe it would lower his mother's expectations. And anyway, it made his head all light and swimmy and soap-bubbly, and almost everything seemed funny, or at least amusing. Even Parry. Lucas watched the lamplight flicker over Parry's disgustingly gold-wavy-thick hair then followed a glittering streamer of its nimbus as it sparked up into the beams of the low ceiling, all colorful and rainbowy and really very pretty, and fanning out--

Whoops, no, that was only a stray ale droplet on his spectacle lens. Should he take them off and clean them? No, he might drop them into his ale. And it really was very pretty.

"So tell me, Tripp," Parry said as he refilled Lucas's cup yet again, "will you be stealing this suitor from your sister too?"

Lucas wanted to growl. It came out a snort. He'd never live that down. Well, he might, if Alex would quit bloody blathering about it every chance he got, how he'd come to court one of Lucas's sisters and ended up instead pinning Lucas to the wall of the formal parlor halfway through the interview.

"You've rather a reputation, Mister Booker." Lucas had begun the meeting bluntly, blatantly scowling, because Alex's reputation, as it were, had rather preceded him. Or at least his brother's had. Lucas might be dying to unload one of his sisters and all the expense that came with her onto some poor unsuspecting dandy--well, *wealthy* unsuspecting dandy; there was a reason Lucas was almost desperate to marry off the remaining four of his six older sisters--but he actually loved them all, and had seen no reason to inflict Alex Booker on any of them. Not that Lucas had ever actually met Alex before. Their social circles didn't exactly intersect, Alex's social circle being more or less the entire world, and Lucas's being his mother, his sisters, a dog that had been mistaken for a pony more than once, and a cat that had sort of come with the house and who seemed to think mousing was beneath her. Oh, and creditors. Couldn't forget the creditors.

Still, it was a small village, and That Booker Lad--as handsome as he was rich, Lucas couldn't help thinking a bit sourly--seemed to have made it his mission to bed everyone in it. Well, all right, three. That Lucas knew of. That Booker Lad was actually Alex's brother, Anson. But still. Things like that tended to run in families. And the fact that Lucas had no idea if that was actually true was not the point. Neither were Alex's eyes. The point. The eyes were not the point. At all. And they were not making Lucas weak in the knees. At all. They were just blue. Blue eyes. Nothing more. Blue, blue, blue and deep and merry and intense all at once, and wow, *cheekbones* that really needed to be licked quite a lot, and....

Lucas had certainly been able to see Alex's--*cough*--appeal, much as he tried not to, but the responsibility of finding good matches for all his sisters was a heavy one, and Lucas took it very seriously. God knew none of his sisters did.

Still, Lucas had told himself, it could have been worse--it could have been Anson Booker, who, by all accounts, had discovered several years ago that the thing in his trousers was useful in more than one way, and hadn't stopped discovering new and interesting ways to use it since.

"Tell me why you want to court Clara," Lucas had demanded of Alex in his best master-of-the-manor tone, and settled an imperious I'm-cousin-to-the-Queen-and-you're-not look on his sister's prospective suitor.

Because, his love of and concern for his sister aside, Lucas had no intention of adding some too-handsome dark-haired, blue-eyed ankle biter born on the wrong side of the blanket to the expense column of the estate's books. He was trying to get *rid* of overhead.

Alex had frowned a little, tilting his head like he'd never considered the question before. "Clara?"

Lucas had stared, trying to decide if Alex was having him on, but when it appeared he wasn't, the stare turned to an openmouthed gape. Not *quite* the superior image he was trying to project. "If you don't even know her name," he'd snapped, "why d'you want to court her?"

"Well," Alex had replied slowly, genuinely frank. "I expect it *is* rather what people... do?"

It had rather gone downhill from there. Well, depending on one's perspective. Alex had not walked away that night with permission to court Lucas's sister, but he *had* walked away with the knowledge that Lucas's hair was red everywhere, and that he tended to babble obscure languages in the throes of orgasm. Lucas still didn't know quite how it had happened. One minute, he'd been trying to decide how to tactfully tell Alex that there was no dowry and the expense of both the handfasting and the wedding would have to be covered by the Booker estate, and the next Alex's hand was so far down Lucas's trousers that Lucas wondered if it might not come back out with one of his socks.

Clara made it a point to forgive Lucas quite frequently. Which, of course, meant she didn't forgive him at all. The "you owe me" was implicit in every sweet smile she'd given him for the past three years. Which was why it was so important to Lucas that everything go well with the promising young Declan Slade.

Lucas let his somewhat blurry gaze stagger back over to the billiards table, where Alex was charming young Slade with a lesson to make up for the obscene amount of silver of which Alex had no doubt just relieved him. Slade was listening attentively, looking at Alex with rapt, ingenuous interest, like most everyone did. Bloody charmer, that Alex. Lucas couldn't help the grin. It wasn't only Alex's looks, with his dark hair and exquisitely trimmed beard, and the shoulders just wide enough, set exactly right on a tall frame that made his subtly expensive coat hang just *so*, the tails flaring over his perfect, *perfect* bottom with--

"Hoy, Tripp!" Parry barked it out right next to Lucas's ear.

Lucas jerked away. "What d'you think--"