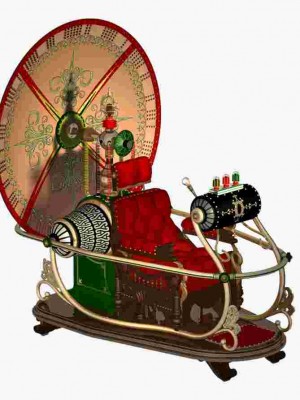 Einstein was born during thunderstorm ,so due to beliefs, being given birth to during thunderstorm is considered as a bad omen. He was rejected by everyone because not so long when he was given birth, his mother died of pain and his father committed suicide due to his wife death. But at the end of became a very great person that can never be easily forgotten in history, because of his invention of the time travel machine.

In the late 1870s, a couple named the Tesla's lived in Germany. This couple comprises of Mr Alberto Tesla and Mrs Luca Tesla. Mr Tesla works as a bar cleaner while Mrs Luca works as a receptionist in a bar.

Mr and Mrs Tesla frequently get stigmatized by the society for lack of child since when they've been married. Mr Tesla being a man of faith prays to God everyday to provide child for them.

One day Mr Tesla was praying to God about their present situation. Meanwhile Mrs Tesla who shouts on Mr Tesla that God doesn't exist, purposely interrupted Mr Tesla prayers by banging on the door and shouting loudly that "stop that your useless prayer you this man God will never listen to you". After the banging, the moment the door was opened by Mr Tesla a heavy slap landed on his cheek. Then after the slap Mrs Tesla began to shout at her husband for the cause of her bareness. Mr Tesla didn't make an utterance despite the slap he received from his wife but he told his wife that"my wife it's not that i am a fool for not retaliating but I want you to know that if you are not patience enough, you will never get what you need and also you don't know the reason for God delaying your pregnancy, do you? he said"

The moment Mrs Tesla heard this she was very sad and heart broken, she tried to beg her husband but it was too late because the husband has gone to their room, which was locked at the back by him. During midnight Mrs Tesla had a rethink and she knew that what she had been doing to God and her husband is not appropriate.

Early in the morning Mrs Tesla woke up kneeling by the bedside praying to God that "o Lord forgive me for my sins, I know that what I did is very wrong, I am sorry for not being patient", after the prayers she walked to her husband who was sleeping beside her,she then waked him up telling him that "my dear husband forgive me for what I have done to you and i am sorry for testing you and your God, please I am ready to change for good infact this night before we have sex we would pray to God about it that the sex we would have should produce a child for us". After saying this the husband was shocked, so he replied her that"my dear I am happy that you came towards God side".

9 months later Mrs tesla in labour pain is taken to the hospital, so that she can deliver safely but unfortunately she died when she gave birth to a baby boy during the thunderstorm. When the people in her community heard this, they considered giving birth in thunderstorm a bad omen, so they said the boy is a child of darkness. The father heard this and said "my child is a child of light and not a child of darkness". The father then named his baby boy Einstein Tesla according to his grandfather's name.