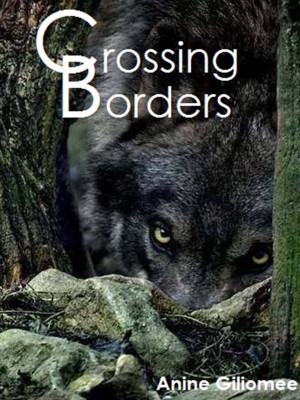 Not being able to shift can really take its toll on someone. But for Lily, she's gotten used to it. Of course she craves to be a werewolf and run along with the pack instead of jumping from tree to tree like a squirrel but what can you do? Get kidnapped sounds like a good idea. "I mean, you're a human who kind of belongs to my pack now. Since you know, you crossed" he said, still advancing towards me. "But... but by crossing the boundary wouldn't you belong... belong to ours then?" I said as he reached. His heavy body rested on mine, letting me feel his heartbeat. His was slow and steady. Mine was probably going on like a bee who had gotten his honey stolen. "You're observant. But it only counts if I was caught" "But you were caught" I said as his hand twirled a strand of my hair once again. "By who?" he said, putting the strand behind my ear. "M-me" I said, trying to sound brave. I never sounded brave. Not even when I was. "Yet, you're not going to be able to tell an

I jumped to the next branch with my nimble finger, feeling like a flying squirrel rather than an actual werewolf.

I'm 20 but still cannot shift. Even something… like me, doesn't deserve a mate.

Underneath me, my pack was running through the woods, their pelts beautifully shining in the moonlight. Speak the truth, I am jealous. I was a flying squirrel while my friends, family, and… well, people I didn't like could be vicious, beautiful wolves.

"Hey! Squirrel girl!" I heard someone yell. I looked down, shooting a glare at Felix, the future Alpha. He was one of those that had shifted since he was a baby, he was even born as a wolf.

"We're splitting, adults are going on their own. Watch yourself."

My heart dropped to my stomach, my eyes widening. I hated when we split. It allowed the wolves to torture me. Maybe I could go home? Or follow the adults. I glanced down at my parents but they weren't there.

I started leaping through the trees. As the woods became denser and more unfamiliar, I started to glance up at the sky.

"Felix!" I yelled, stopping dead on one of the branches.

Didn’t they notice that they’re about to go into the Hellwood Pack’s territory? This brutal pack was like a gang, werewolves will die if they go into their territory.

The wolf in front of me just kept running, probably not have heard me over his ego. I glanced over at the space in front of me. It wouldn't be that dangerous, would it? I wasn't a shifter and can easily be confused for just a normal human… that jumps around on trees.

I took a deep breath, jumping to the next branch. I kept going, the wind starting to be the only thing I can hear. The branches and trees in front of me became my only vision as if my goal was clear. Get in front of Felix and stop them from making a huge mistake.

I suddenly stopped, looking down at the pack. Felix was still a few trees away. I let out a whistle, him actually noticing me. He slowed down but still continued to run.

"Hey! Felix! You're heading into Hellwood territory!" I yelled, using my hands as a bullhorn.

Felix finally stopped, barking for the pack to stop as well.

But then… then I heard another howl, an unfamiliar one that sent shivers down my spine. Gulping, I got ready once again to jump but as I changed the position of my feet, I felt the branch give way below me.

I tried grabbing hold of another but my hands only took hold of air. My scream could probably have been heard by the man in the moon as I plunged to the ground. I was going to die. I didn't know how far the height had to be for someone to die from impact, but I'm guessing four or five stories would be enough.

I closed my eyes, bracing for impact.

But it never comes…

Instead of landing on the ground in a pool of blood and cracked bones, I land on something soft. I can register enough to know that it's fur but haven't collected my thoughts enough yet to register whose.

For a moment, I think Felix had actually come to save me but when I dazedly look up I see the majesty standing in front of me, looking like a scared puppy. I slowly turn my head, seeing an unfamiliar wolf's head looking at my pack.

I slowly slip off of the wolf's back, my bottom ribs and stomach hurting from where I had made an impact on the body. The drop is far, the wolf about the size of a mountain lion. I scramble away from him, hitting the back of my head on a tree. In front of me is a black wolf, the fur so dark it almost appears blue.

He is from the Hellwood pack, he has to be.

I slowly get up, my limbs shaking. I have to get to my pack. But before I could even move an inch, the Hellwood—wolf's head snaps to me. He lets out a growl, making me fall back onto the ground. I'm so going to die. I'll be a nice little snack for him before he kills the rest of my pack.

The wolf's head turns towards human—Felix, who is wearing his shorts, knowing that showing his privates would be a sign of even more disrespect. The wolf in front of me lets out another growl, this one aimed at my fearless leader. Then the wolf jogs into the woods and I slowly get up again.

I quickly move my way towards him, but just before I reach him, a hand clasps around my wrist. I can smell peppermint, the warmth of a body enclosing me in a cocoon. A cocoon of fear.

"Where do you think you're going?" I hear a voice beside me. It sounds harsh yet makes my heart skip a beat. I can't deny that this murderer has a beautiful voice.

"To… to my pack," I say, the words barely audible.

"You crossed the territory," I hear the wolf says, "You’re mine now."

"Please," I try to beg, still not having looked at my captured face.

I hear him chuckle and then I'm pushed onto a rock—hard body. He wraps his arm around my neck and places his hand on my hip. I want to shake it off but I am scared he'll become even more unstable.

"She sure smells like one," the man says and his fingers twirl a strand of hair around them, the sensation making my legs feel like jelly. Thought that also might just be out of fear.

"She's part of our pack, she's not a shifter, please – just… she made a mistake," Felix tries to help me out.

"Tell your pack to be more careful with their kind," the man said, tightening his grip on my hip.

"Please," I said, feeling a tear slip out of my eyelids.

His hand moved to my other hip but his arm that was around my neck fell to his side. Then I got to see his face.

With a head of black hair and a jawline so sharp it would probably cut glass, I was in awe. Those stormy eyes stared into mine, a smirk portrayed on his perfect lips. His skin was tanned as if he spent most of his time outside – killing territory passers – and he had a light stubble lining that perfect jaw.

I land on my bum again, knowing that it will join the parts of me that will become blue. I scramble up, rushing towards Felix. For the first time in our lives, he wraps an arm around my waist, comforting me.

"If I see any of you close to the border again, I’ll end you!" Chase warns. He glances at me for a second, giving me a wink before disappearing into the woods.

When he's gone I nestle my head into Felix's shoulder, tears leaking out of my eyes.

"It's okay, it's okay Lily." I hear Felix says, brushing my hair with my fingers. He slowly lets go of me, "Come on, we have to get back to the pack."

I turned my gaze away as Felix undressed and shifted. The pack started to move again, leaving me to walk home.

I sighed once again, getting ready to trudge the whole night. I wouldn't be able to use the trees, too shaken up from what had just happened.

"You know they're really stupid to just leave you behind like that."

I whipped around, seeing Chase standing there, the same smirk on his face. He moved towards me, me reacting by taking a slow step backward. Again, my head hits a tree. I swear I was going to get a concussion if this tree knocking didn't stop.

"I mean, you're a human who kind of belongs to my pack now. Since you know, you crossed." Chase said, still advancing towards me.

"But… but by crossing the boundary wouldn't you belong… belong to ours then?" I said as he reached.

His heavy body rested on mine, letting me feel his heartbeat. His was slow and steady. Mine was probably going on like a bee who had gotten his honey stolen.

"You're observant. But it only counts if I was caught."

"But you were caught," I said as his hand twirled a strand of my hair once again.

"By who?" he said, putting the strand behind my ear.

"M—me," I said, trying to sound brave. I never sounded brave. Not even when I was.

"Yet, you're not going to be able to tell anyone," he smiled.

"Because you're mine now," he smiled, the words coming out as nonchalant as the others. My eyes widened, trying to get him off of me. I opened my mouth, ready to scream, but before I could my mouth was assaulted by his.

This man knew how to kiss someone.

His lips left sparks to erupt on my mouth, my heart raising.

"Sleep tight human," he said before I felt pressure in my neck.

Before I could respond or do anything, everything faded into darkness. The last thing I saw was those grey orbs sucking away my life.