Home/ Pregnant For My Boss Completed
He's my new boss? But I had a one-night stand with him last night! 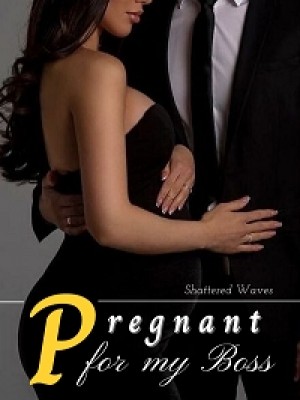 Pregnant For My Boss

A dare on her birthday night had made Kristen's life rush to an unexpected direction. She just wanted a happy one-night stand which might give her a cute baby. But god! Why that mysterious handsome man suddenly turned out to be her new boss?

About
Table of Contents
Comments (34)

"Come on Kristen, it's your birthday and you still holding on so stiff, why not just let yourself go and have fun," Sky pouts cutesy, "Pretty darling, please just this once,"

"You drunk silly fellow, you keep bugging me for drinks but yet, you can't hold your alcohol," I teased, looking around the bar. It was an exotic bar situated in the middle of the city, Sky dragged me here after so much resistance to celebrate my birthday.

"Best friend privileges," She said, how could I say no to that?

I let out a frustrated sigh, we had just a few drinks but Sky was already drunk-dazed and daring me ridiculous dares, she does this every time we hang out, dares me to do the most ridiculous things.

Tonight, though it was my birthday and I would have gladly indulged her ways just for the fun of my birthday, unfortunately, she is daring me to seduce that hulk of a man that is seated just about five tables away from us. Seducing Mr Strange won't even be that much of a problem if not for the fact that multiple beautiful have tried approaching and flirting with him but he is so adamant and arrogant, that those women either ended up embarrassed from his humiliation or running out of the bar with tears, some just get simply ignored, which in my opinion is a better option than getting humiliated or crying.

No one in the bar seems to know the guy but he looked powerful, the aura around him reeks of power and wealth, or maybe just my perception of him.

I sighed, woe to me if I was surprised at this point, Sky is a serial drunken mess, she never fails in her series of causing and creating troubles whenever she is drunk, she had committed us to several problems that we ended up in the police station so many times that right now, the police station was no longer that big of a deal to me.

Being her best friend, it is always fun to play along and do her ridiculous dares, except if it gets too extreme then I'll pretend just to calm her down, I'd fake the deed and she will believe me.

I turned my head to face the guy, his aura might reek of power but his presence was sad, his persona spoke of an unbounded sadness, with his shoulders slumping down like he has given up in life and him chugging on the alcohol like it was water.

Watching him, all I could say was that…The guy was a clear red flag. I love a challenge such as this one.

"Kristen…" Sky mumbles inherently from her seat, she sounded so drunk,

"Have you thought about the possibility of your heart desires coming through and also the vivid possibility of living out your fantasy? Huh?" Sky said as she reached over the table to cup my face in her hands,

Oh no, she is deluding again, I scoffed, "How are you so sure it will be all that?"

"My instincts are going haywire on this one,"

"That is what you said about the last guy that almost duped us of all our savings last time you placed me on a dare like this?!" I retorted,

"Whatever, that last guy was a douche, let's focus on the present, shall we? Look at those pretty muscles threatening to pierce out of his suit," Sky said, "I couldn't be wrong, he is the one."

"Oh please, look at that wide back and shoulders, that feature is only embodied in handsome men, if you don't believe me, go see for yourself, I can bet a hundred dollars that Mr Sexy Hulk over there is far more handsome and sexier than your celebrity crushes,"

"Yeah, right…that was what you said about that last jerk, but he turned out to be a thief, imagine if I took you up on that dare?" I muttered,

"Well, good thing you didn't, you have a good instinct and I trust your empathy. That is why I have an inkling feeling that…"

"Nothing," Sky smirked, "Kristen my dear beautiful best friend, it is your birthday baby. Just let go and have fun, first of all, I don't want my best friend to hold on to her virginity past this age, think about the good part, you get your dream come true, that is getting a baby out of this, a baby with good genes, then you also get to experience good sex on your first time, isn't that like pleasure on a platter of gold?"

"Okay, let's have a deal. After tonight, I will never ask you to do anything like this again. Even if tonight doesn't work out well, I won't ask." Sky said,

"Fine…fine, I will do it, but if he is not as hot as we envisioned, we will back out, okay?"

"Okay but just go up to him first…"

"Sure thing," I muttered under my breath as I set out to talk Mr Sexy Hulk into spending the rest of the night tangled up with me underneath the sheet, hopefully leaving lots of his seeds inside my vulva to help me with my wishes.

I said a silent prayer to whatever being was responsible for granting birthday wishes, this was mine, my wishes, ...A pleasure-filled one-night stand with fertile results.

With one final inhaled sigh, I took a seat at the bar ignoring Sky's silent squeal,

I placed an order for tequila while I turned to size up the hulk seated beside me, the light was dim but it shone on his caramel skin, the skin was radiating with sweats and the glimmer of light, it looked flawless, I had no idea sweats could look so hot on a human being, let alone a man, I thought I hated the sweats on man, I used to think it was dirty, but seeing it on him, it looked clean.

Is that a thing…clean sweat?'

Anyway, I focused back my attention on Mr Sexy Hulk taking in every sweet detail on his face not until he turned unexpectedly and our eyes locked together, "Shit," I muttered under my breath, "Sorry,"

"Your drink, the attendant has been handing you your drink, " He said,

"Drink? Ohh…sorry," I stuttered as embarrassment washed over every part of my body, so I took the drink and paid the barman.

I gave him up the chance, there was nowhere I was going to make any attempt to him after getting caught hawking him like that, so after payment, I calm myself before standing up to leave, afraid that I would wobble and fall, but just as I stood to leave, large cold hands grabbed mine, I spun fearfully,

"Weren't you here to keep me company?"