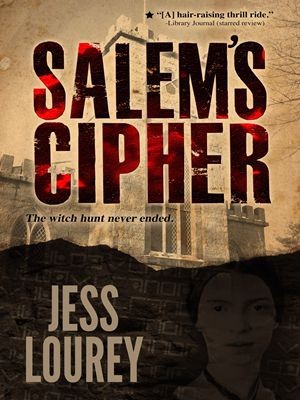 Salem Wiley is a genius cryptanalyst, courted by the world’s top security agencies ever since making a breakthrough discovery in her field of quantum computing. She’s also an agoraphobe, shackled to a narrow routine by her fear of public places. When her mother’s disappearance is linked to a plot to assassinate the country’s first viable female presidential candidate, Salem finds herself both target and detective in a modern-day witch hunt. Drawn into a labyrinth of messages encrypted by Emily Dickinson and centuries-old codes tucked inside the Beale Cipher, Salem begins to uncover the truth: an ancient and ruthless group is hell-bent on ruling the world, and only a select group of women stands in its way.

Grace Odegaard inserted her key into the top dead bolt and rotated it. The lock slid free with a satisfying snick. She repeated the action with the three locks below, humming to herself, a satisfied smile anchoring her face. The date had gone well. Not great—she could have done without the corny jokes—but good enough. He was a high school soccer coach. The conversation had flowed easily. At the end of the night, he’d kissed her. Not too sloppy, exactly the right length of time. He’d even held her face when his lips brushed hers, just like in the movies.

Her smile widened. “Out late, aren’t you?”

Grace jumped, her heart pounding. “Mrs. Gladia.” Her neighbor of seven years stood in the shadows of the hallway, hair askew. She wore a quilted robe and slippers.

“Was it a date?” Mrs. Gladia stepped into the light. Her dog, Dante, a ratty puff of yellowish fur, was tucked under her arm.

Grace threw the beast a look. He snarled at her. She’d dog—sat him before, but their relationship had never thawed beyond this stage, primarily because Dante was an asshole. “It was. Our first.”

Grace coughed to mask a laugh. As far as she could tell, Mrs. Gladia hadn’t been on a date since the ’50s. “I don’t know what he drove, but I liked his smile.”

Mrs. Gladia tipped her chin and studied Grace. Dante growled, a tiny machine gun of fruitless anger low in his chest. Mrs. Gladia patted his flattened ears. “You’re a good girl, Grace. Make sure to lock your doors. This world isn’t safe.” She shuffled back into the shadows and down the hall.

Grace waited until Mrs. Gladia entered and locked her apartment before crossing into her own two—bedroom, smiling at the glitter jack—o’—lantern cut—outs that decorated the door. Tomorrow was Halloween, and she hoped for trick—or—treaters. She tossed her purse onto a chair and stretched before engaging all four locks. Flicking on the TV for background noise, she kicked off her shoes and padded to the bathroom to remove her make—up and brush her teeth.

“The wave of refugees threaten to overwhelm the bordering European nations, with upwards of four million people fleeing the conflict. Coming up after the break, this year’s presidential election is nine days away and has already broken all campaign…”

She wiped the last traces of the day from her face, leaving a beige streak on the plush towel. Bel had tried to talk her into wearing less make—up. Made her look older than she was, her daughter argued. Grace had said she’d think about it.

She glanced at the king—sized pillow—top calling her name. Bright and early tomorrow, she was scheduled to show a $2.25—million French Colonial on the north side of Lake of the Isles. She needed to be on her game.

She clicked the “off ” button on the TV remote at the exact moment a single knock struck her door.

Grace shrugged. Maybe it had been an echo from the TV. She glided across the living room toward her bedroom.

Grace sighed and made her way to the front door. She undid the top lock, then the second, then the third. She had the fourth dead bolt in hand before it occurred to her to peer through the spy hole. Time had made her careless.

What she saw on the other side stopped her breath.

She twisted the fourth lock and whipped the door open. “Vee? What’s wrong?”

Her friend spilled through the doorway. Vida’s lovely silver and black hair, normally styled into a tight bun, was disheveled. Dark bags packed her eyes. She spun and began locking the door before she was entirely inside the room.

“Have you seen the news?”

Grace stared at the dark television. “I just had it on. Why?”

Vida didn’t answer. She didn’t have to. It was etched in the lines of her face.

“Another one isn’t answering her phone. It’s only a matter of time.” Vida patted the necklace under her shirt, a bauble purchased for her by her daughter a decade ago. Grace wore an identical one, half a pink quartz heart, the word love etched in it. Bel and Salem had bought them for their moms, keeping the other half of the hearts for themselves. “We have to tell the girls. In person. The phones aren’t safe.”

Grace’s hand flew to her mouth. “They’re not ready,” she whispered.

Vida rubbed her eyes. “They’re going to have to be. Your suitcase is packed?”

Grace nodded and hurried into her bedroom. She grabbed the duffel from her closet. Of course it was packed. It had been packed since Daniel’s murder fourteen years earlier.

“You’ll bring it?” Vida stood at the bedroom door, her mouth a tight slice.

Grace’s eyes swooped to her nightstand. Daniel, Vida’s husband, had built it for one purpose before he died. Grace knelt, pushed four concealed wooden buttons in a prescribed order, and turned the knob on the front panel. A tiny drawer popped open. It held a single item the size of a quarter.

Vida peered over Grace’s shoulder. They both stared at the silver locket. The top loop was strung with a platinum chain, nearly unbreakable. A milky seed pearl dripped off the bottom. The locket’s hinge was delicate, microscopic.

The inside was smooth except for one engraved word: mercy.

Grace stood up too quickly, knocking over the table and the lamp it held. The light crashed to the ground, flashing jerky, macabre shadows across the room. Hands shaking, Grace righted the lamp and scooped up the locket. It took her three tries to slip the chain over her neck. She tucked the jewelry under her sweater, next to her half of a pink quartz heart.

Vida nodded curtly, but her face was crumbling. She gathered Grace in an embrace. “I’d hoped it would never come to this.”

Grace clung to her for a moment. It felt greedy. They pulled apart and darted toward the front door, their breath matched and quick.

For one sweet second, Grace thought of the future. Of making it out of this alive. Of protecting Salem and Bel, more precious to them than their own lives.

But then she spotted it.

The door handle twisting slowly, a snake in a bush. It took everything within Grace not to whimper.

Vida grabbed Grace’s hand, her finger flying to her lips in warning. Eyes pinned to the doorknob, Vida eased her hand into her jacket and tugged out a wooden box etched with an om symbol, setting it on the TV stand next to her.

Grace smiled bitterly, recognizing the container for what it was: a fail—safe should they not escape this apartment. She and Vida exchanged a glance pregnant with regret. Beads of sweat erupted on Grace’s top lip. She could taste her own salt as she stared at the door, bracing herself.

The door handle stopped moving, replaced by a loud knocking. “Grace! What is all that racket over there? Me and Dante are trying to sleep.”

A hot wave of relief washed over Grace. “It’s Mrs. Gladia. My neighbor.” She attempted to reassure Vida with a smile, but her mouth was too dry and her top lip caught on her teeth. She strode forward to unlock the door.

Vida tried to hold her back, but Grace brushed her off. “You’ve met her. The Italian widow from next door? If I don’t calm her down, she’ll never let us leave. Besides, this door is the only way out.”

The air grew syrupy. The heat of it felt impossibly drowsy. She inched the door open.

The apartment shadows shifted as the hallway lights slithered in. Grace’s animal brain, her deep instinctual self, screamed at her to run.

She ignored it. She would not lose herself to panic. She would behave normally. That was the only way she and Vida were going to survive this. When your neighbor knocks, you answer.

Only when she landed eyes on Mrs. Gladia on the other side of the door, miserable Dante snarling in the crook of her arm, did she realize she’d been holding her breath. She exhaled in a loud whoosh.

Mrs. Gladia was scowling. The sleep—flyaways in her hair made her expression difficult to take seriously. A relieved laugh forced its way out of Grace, but it was shrill, a teakettle giggle. She waved the air as if to erase the sound.

“Sorry, Mrs. Gladia. You remember my friend Vee? We were just going out for a—”

A symphony of tiny pops erupted from the hallway next to Mrs. Gladia, as if a hundred mouse bones were cracking and snapping back into place. Vida’s fingertips dug into Grace’s shoulder.

What happened next took less than a second.

The blade flashed from the shadows. Dante barked, but it was too late. The knife unzipped Mrs. Gladia’s neck, its steel so sharp that for a moment, her flesh was too shocked to bleed. It could only quiver, a deep red jelly.

Mrs. Gladia turned toward the assailant and gargled. A bloody bubble moistened her lips.

The first spurt erupted from her neck, the counter—stroke to her vanishing heartbeat. It sprayed the walls to the right of the apartment door, washed the front of her robe, poured across the floor. Mrs. Gladia dropped Dante. He began yapping in earnest. She toppled backward like a felled tree.

On the floor above, one door opened, and then another. The muffle of voices drifted down. Dante’s barks were waking up the building. He licked at his mistress’s blood between yelps, an asshole to the end.

Grace would never know any of this.

Vida had grabbed her at first glint of the wicked steel, ripped the duffel bag from her hand, and shoved her toward the window. She’d yanked it open and leapt onto the fire escape, urging Grace to follow.

Grace stuck her head out the window. She hesitated.

Three stories below, a smattering of people walked in the cool fall air. They weren’t moving quite right, ambulating a little too slowly, with a little too much precision, like well crafted robots.

Grace blinked. The people below shifted, walking normally. It must have been a trick of her eyes. It didn’t matter. She had only one option, really.

“Run!” Vida yelled, seizing the collar of Grace’s sweater and jerking her out the window.

Behind them, the killer broke Dante’s neck with a single smooth twist and stepped over Mrs. Gladia’s spouting body and into the apartment. He surveyed the space, eyes darting to the open window.

He cleaned and then sheathed his blade.

Next, he placed his gloved hands on each side of his skull. The shape of his face began to change—first the brow bones, advancing to the cheeks, and then the nose and mouth.

From long practice, he kept from crying out at the pain.

If he hurried, he could still acquire the women.