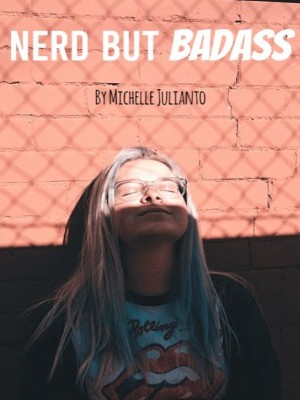 Cassandra Johnson is Pixie. Pixie is Cassandra Johnson. She's the same girl who's leading two extremely different lives. Nobody would suspect the school's nerd as Pixie. 'Cause Pixie's a street fighter badass and the nerd does not have a single badass bone in her body. The chances of people discovering this peculiar secret is close to none but of course this is where fate inserts the certified new boy into the equation and makes an exception for him. Warning: heavy flow of profanities ahead. - and tears - or so I've heard.

I heard the urgent tone under his voice as he yelled and felt a hand shaking my knee in a frantic gesture. I sat up abruptly and forced my blurry vision to focus on my surroundings. When I realized what the pair of blinding lights was, I immediately strapped my seat belt on and curled my body up and tried to protect my head by shielding them with my arms. A weight settled on me as I squeezed my eyes shut and the next thing I knew, I was facing gravity head on.

I woke up with my heart beating hard against my rib cage and my breathing was shallow. A thin sheen of sweat covered my forehead and back as I tried my hardest to get myself to calm down. It wasn’t long until I felt my breathing ceased back to a regular rhythmic inhales and exhales but I knew I wouldn’t be able to sleep anymore. I felt around my bedside table for my phone and when I finally got a hold on it, the harsh light from the screen caused me to squint and I barely managed to check the time before my eyes watered from the sharp sting of staring at the screen. I took a brief glimpse on the time, only to find out that I still had 2 more hours before school.

I untangled myself from the sheets, swung my legs to the side of the bed hastily, my foot easing onto the cold hard surface of the floor. I walked the small distance to the door and twisted the doorknob before pulling it open gingerly, cringing at the creaking of the rusty hinges. Stepping out of my bedroom and shutting the door quietly behind me. I immediately made my way to the staircase that was located down the corridor.

I went down the stairs quietly. The only noise heard was the creaking of stairs bearing my weight and I flinched when the last step I took made the loudest one of all. I wouldn’t have any explanation as to why I was wandering around the house. If my parents caught me, I don’t think they would appreciate being waken up at the first dawn early in the morning. I threaded my steps carefully and headed to the kitchen, grabbing a drink to quench my thirst.

After I relieved my dry throat, I covered the small distance between the dispenser and the sink and bent my body after opening the tap, watching the water gush out and cupping my hands beneath it to catch some water and splashed a handful onto my face to try rub all the traces of the dream off.

I turned the faucet off and held on to the edges of the sink, staring at the water that circles the base of the sink before going down the drain and disappearing. It had almost been two long, hard years and I still had dreams about that night. I climbed up the stairs again and entered my bedroom, flicking my nightlight on.

The dim light illuminated the two beds in the room. I requested that the bed, a few feet from mine, to not to be taken out of the room. One was neatly made and the other was mine, obviously messed up with the duvet strewn everywhere.

I picked my way towards the bedside table of the neatly made bed, where there were frames of untouched pictures. My hand hovered above one of the picture frames as I breathed a sigh, relaxing my tense muscles and flexing my fingers before gingerly taking the framed memory into my hand. I held it as if it was an expensive piece of a china porcelain collection. But this captured memory is worth way more than those ancient porcelains, no matter how much the collections are worth.

I looked down after a strong exhale of air in an attempt to prepare myself on the tide of memories and stared at the piece of paper that showed a little girl hugged by an older looking boy. Both were chubby and round but they both had big smiles on their faces.

Another showed both of the children sitting on their parents’ lap beside a birthday cake with the candle that shaped a ‘3’ on it and icings that spelled ‘Cassandra Rylie Johnson’ in cursive writing. Both their parents were trying to divert their attention to the camera but both kids refused to budge. It seemed as if they were having an inside joke through a sibling telepathy. They were both grinning innocently while looking at each other and compared to the former picture, the boy’s facial expression visibly softened when he fixed his stare on the girl.

Another was what you would call a photo shoot. The girl looked a bit older now but she didn’t lose the grin. She was using a small pink and fluffy flannel, sitting down on a stool with white shorts clinging to her thighs while hugging a beige teddy bear. Meanwhile, the boy was standing, straight and towered over the girl. Although he was a kid, he didn’t fail to come off protective of the little girl. He didn’t show a grin on this one, his facial expression was hard but you couldn’t miss the slight twinkle in his eyes.

The last picture showed a girl and a boy. Both looked years older than the kids in the other pictures, probably 16 and 18. The girl was grinning and it was the exact same grin the girl in the other pictures had and it was as if she didn’t age a bit, still so sweet, so innocent and naïve, completely sheltered from the cruelty stored within the depths of the world. The boy didn’t grin but he did smile. One of his arms was slung across the girl’s shoulders, hugging her from behind, hunching his body so that he could rest his chin on the girl’s head.

The scenery behind them was of a mountain covered with snow and it seemed to touch the clear and blue sky. Below the mountains was a lake with a beautiful, startling shade of blue, so clear as to allow the sun’s rays to hit its surface and was immediately reflected back, creating stars to appear on the surface of the waters. The both of them squinted under the sun’s glare but the happiness evident on their faces was undoubtedly real.

I sighed and stroked the wooden frame. How I miss you, brother. A lone tear escaped my glassy eyes when I finally set the framed picture gently back onto the bedside table gently and was once again swallowed by grief with the remembrance of loss I experienced not too long ago.

I crawled onto the bed and hugged a worn out and striped grey piece of cloth that has lost its color and has tiny holes on it, frayed and torn but I kept it close and wept onto it, grieving over the brother I lost that night like I had been doing for the past 24 months. I clutched on the battered cloth as if my life depended on it, digging my nails into it while it muffles my choked sobs as I thought about my scream that night and inhaled slowly only to feel dismayed by the fact that his trademark perfume smell was washed away by time and was no longer there.

My fingers played with the loose strings of the piece of cloth, the last thing that the little boy left behind.