Home/ President, You Get Divorced Again? Ongoing
The hot president who was drugged later became my beloved hubby. 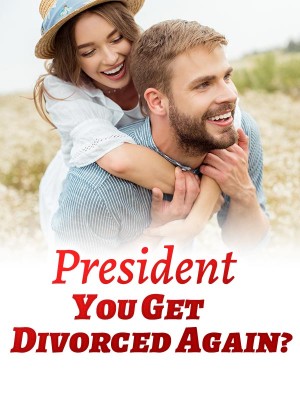 President, You Get Divorced Again?

Su Ruoxi was so unfortunate that she had been schemed by her ex-boyfriend and half-sister twice! What a pity! They messed about the wrong person, cause Su Ruoxi would never yield to bully and schemes. When the shameless couple locked Su Ruoxi who had been drugged with an old man, they were holding the wedding. Just when the bride was about to kiss the bridegroom, Su Ruoxi showed up magically. Everyone at present was attracted by this charming and gorgeous girl who looked much better than the bridegroom. Then Su Ruoxi pretended to be weak and heartbroken, accusing the couple of cheating on her. All the big shots were present at this wedding, and now the couple became much notorious. Just when Su Ruoxi still faked crying, a hot guy came to her and said gently, "Don't cry baby. Will you marry me?"

The Emperor Hotel was located on Jinghua Street, in which even an inch of the land was extremely expensive, equivalent to a piece of gold.

A figure bolted into the room in a hurry.

"Bang!" The door was slammed tight and locked securely.

The room was pitch-black. Ruoxi Su groped her way to the bathroom for a cold shower to cool herself down.

Sh*t, Xinrui Su and Jingxuan Gu, the shameful duo! So they came back again to plot against me tonight after failing to do so during the day? Good, very good! Luckily I had managed to escape. They'd better watch out!

Only when her body no longer had any abnormalities did Ruoxi come out. However, before she took even a few steps, a low and hoarse voice in which the tone could be barely distinguished suddenly sounded. "Scram!"

"It's an emergency. I'll leave after tonight."

For a long time, the man did not answer.

There was still no movement.

At the moment, she was afraid that this person would blame her for something, so she bravely approached him. When she reached the sofa, a very strong smell of alcohol engulfed her.

"Are you drunk?" She was a little speechless.

Just then, after her remarks, the man suddenly opened his eyes. Without giving her an opportunity to react, he grabbed her, and then rolled down from the sofa, pressing her to the ground.

Fortunately, after pressing her down, he did not made any other movements.

Struggling, Ruoxi tried to free herself underneath him. Only after scuffling around for quite some time did she manage to wrestle herself from his grip.

With that, she didn't dare to stay any longer. Before she left, she just wanted to see what he looked like.

Turning on her phone, she flashed it at him.

The next second, her hand trembled, and the phone fell heavily on his face, which was more beautiful than a fairy's.

In his slumber, he frowned and mumbled something.

In panic, Ruoxi picked up the phone as fast as she could and then ran away.

Oh my god, the person she bumped into just now was her husband, whom she had just married for less than half a day—Nanling Sheng!

F*ck, what luck she had!

She was relieved after escaping from the hotel. With the room being pitch black and Nanling drunk from alcohol, it was impossible for him to recognize her.

An engagement banquet was going to be held in the Emperor Hotel. It was the marriage between Ruoxi, the eldest daughter of the Su family, and Jingxuan, the son of the Gu family.

The phone rang and got through. "Miss Su, everything is arranged."

"Okay, Uncle Chen." After Ruoxi hung up the phone, her eyes flashed with coldness. Then, she entered the hotel.

Half a year ago, her parents, who were the president and president's wife of the Su Group, had died suddenly because of an accident. She was left with her younger brother studying abroad, while the position of president was temporarily in the charge of her eldest uncle, Houming Su.

At that time, the Su family and the Gu family had jointly established a business. Later, they parted ways and grew separately, but both sides had a portion worth 20% of each other's shares.

And this 20% of the shares was for the children of the two families!

If the children of both families got married to each other, the shares would naturally belong to both families. But if one of them cheated or broke their marriage, the 20% of his or her shares would be lost. In this way, it was equivalent to the innocent party having the other's 20% shares on top of his or her own complete shares.

While the cheater would only be left with 80% of his shares!

This was the agreement between the two families.

Since Ruoxi and Jingxuan grew up together, the marriage between them had been scheduled long ago, and the banquet was held today. However, a few days ago, she discovered that Jingxuan had hooked up with her cousin, Xinrui, who was the daughter of her uncle!

When Ruoxi unearthed their love affair at that time, she was shocked to the core!

Not only that, Jingxuan and Xinrui even had their eyes on the 20% of the shares of the Gu family in her possession!

On the eve of the engagement banquet, the two of them tried to use underhanded tricks to marry Ruoxi to an old man. Ruoxi was escorted to the Civil Affairs Bureau. However, she was smart enough to escape. And that was when she ran into Nanling, which was out of her expectation!

He directly asked, "Are you single?"