Home/ Do and Dare — a Brave Boy's Fight for Fortune Completed 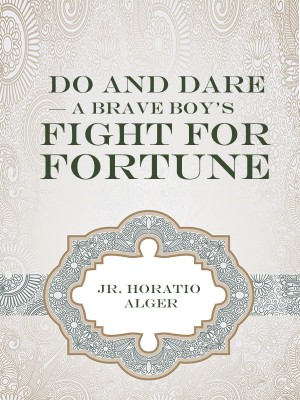 Do and Dare — a Brave Boy's Fight for Fortune

“If we could only keep the post office, mother, we should be all right,” said Herbert Carr, as he and his mother sat together in the little sitting room of the plain cottage which the two had occupied ever since he was a boy of five...

“If we could only keep the post office, mother, we should be all right,”said Herbert Carr, as he and his mother sat together in the littlesitting room of the plain cottage which the two had occupied ever sincehe was a boy of five.

“Yes, Herbert, but I am afraid there won't be much chance of it.”

“Who would want to take it from you, mother?”

“Men are selfish, Herbert, and there is no office, however small, thatis not sought after.”

“What was the income last year?” inquired Herbert.

Mrs. Carr referred to a blank book lying on the table in which thepost-office accounts were kept, and answered:

“I shouldn't think that would be much of an inducement to an able-bodiedman, who could work at any business.”

“Your father was glad to have it.”

“Yes, mother, but he had lost an arm in the war, and could not engage inany business that required both hands.”

“That is true, Herbert, but I am afraid there will be more than one whowill be willing to relieve me of the duties. Old Mrs. Allen called atthe office to-day, and told me she understood that there was a movementon foot to have Ebenezer Graham appointed.”

“Yes; it is understood that the squire will throw his influence into thescale, and that will probably decide the matter.”

“Then it's very mean of Squire Walsingham,” said Herbert, indignantly.“He knows that you depend on the office for a living.”

“Most men are selfish, my dear Herbert.”

“But he was an old schoolfellow of father's, and it was as hissubstitute that father went to the war where he was wounded.”

“True, Herbert, but I am afraid that consideration won't weigh much withJohn Walsingham.”

“I have a great mind to go and see him, mother. Have you anyobjections?”

“I have no objections, but I am afraid it will do no good.”

“Mr. Graham ought to be ashamed, with the profits of his store, to wantthe post office also. His store alone pays him handsomely.”

“Mr. Graham is fond of money. He means to be a rich man.”

“That is true enough. He is about the meanest man in town.”

A few words are needed in explanation, though the conversation explainsitself pretty well.

Herbert's father, returning from the war with the loss of an arm, wasfortunate enough to receive the appointment of postmaster, and thusearn a small, but, with strict economy, adequate income, until a feverterminated his earthly career at middle age. Mr. Graham was a rivalapplicant for the office, but Mr. Carr's services in the war werethought to give him superior claims, and he secured it. During the monththat had elapsed since his death, Mrs. Carr had carried on the postoffice under a temporary appointment. She was a woman of good businesscapacity, and already familiar with the duties of the office, havingassisted her husband, especially during his sickness, when nearly thewhole work devolved upon her. Most of the village people were in favorof having her retained, but the local influence of Squire Walsingham andhis nephew was so great that a petition in favor of the latter securednumerous signatures, and was already on file at the department inWashington, and backed by the congressman of the district, who wasa political friend of the squire. Mrs. Carr was not aware that themovement for her displacement had gone so far.

It was already nine o'clock when Herbert's conversation with his motherended, and he resolved to defer his call upon Squire Walsingham till thenext morning.

About nine o'clock in the forenoon our young hero rang the bell ofthe village magnate, and with but little delay was ushered into hispresence.

Squire Walsingham was a tall, portly man of fifty, sleek and evidentlyon excellent terms with himself. Indeed, he was but five years olderthan his nephew, Ebenezer Graham, and looked the younger of the two,despite the relationship. If he had been a United States Senator hecould not have been more dignified in his deportment, or esteemedhimself of greater consequence. He was a selfish man, but he was freefrom the mean traits that characterized his nephew.

“You are the Carr boy,” said the squire, pompously, looking over hisspectacles at Herbert, as he entered the door.

“My name is Herbert Carr,” said Herbert, shortly. “You have known me allmy life.”

“Certainly,” said the squire, a little ruffled at the failure of hisgrand manner to impose upon his young visitor. “Did I not call you theCarr boy?”

Herbert did not fancy being called the Carr boy, but he was there to aska favor, and he thought it prudent not to show his dissatisfaction. Heresolved to come to the point at once.

“I have called, Squire Walsingham,” he commenced, “to ask if you willuse your influence to have my mother retained in charge of the postoffice.”

“Ahem!” said the squire, somewhat embarrassed. “I am not in charge ofthe post-office department.”

“No, sir, I am aware of that; but the postmaster general will beinfluenced by the recommendations of people in the village.”

“Very true!” said the squire, complacently. “Very true, and very proper.I do not pretend to say that my recommendation would not weigh with theauthorities at Washington. Indeed, the member from our district is apersonal friend of mine.”

“You know how we are situated,” continued Herbert, who thought it bestto state his case as briefly as possible. “Father was unable to saveanything, and we have no money ahead. If mother can keep the postoffice, we shall get along nicely, but if she loses it, we shall have ahard time.”

“I am surprised that in your father's long tenure of office he did notsave something,” said the squire, in a tone which indicated not onlysurprise but reproof.

“There was not much chance to save on a salary of four hundred dollars ayear,” said Herbert, soberly, “after supporting a family of three.”

“Ahem!” said the squire, sagely; “where there's a will there's a way.Improvidence is the great fault of the lower classes.”

Squire Walmsgham was secretly ambitious of representing his districtsome day in Congress, and he felt that he had made a mistake. It won'tdo for an aspirant to office to speak of the lower classes, and thesquire hastened to repair his error.

“That was not the term I intended to imply,” he condescended to explain.“I meant to say that improvidence is the prevailing fault of those whoseincome is small.”

“We haven't had much chance to be improvident!” said Herbert “We havehad to spend all our income, but we are not in debt--that is, we have nodebts that we are unable to pay.”

“That is well,” said Squire Walsingham, “but, my young constituent--Imean my young friend--I apprehend that you do not take a right viewof public office. It is not designed to support a privileged class inluxury.”

“I am speaking in general terms,” said the squire, hastily. “I mean tosay that I cannot recommend a person to office simply because he or sheneeds the income.”

“No, sir, I know that; but my mother understands the duties of theoffice, and no complaint has been made that she does not make a goodpostmaster.”

“Possibly,” said the squire, non-commitally; “but I am opposed uponprinciple to conferring offices upon women. Men are more efficient, andbetter qualified to discharge responsible duties.”

“Then, sir,” said Herbert, his heart sinking, “I am to understand thatyou do not favor the appointment of my mother?”

“I should be glad to hear that your mother was doing well,” said thesquire, “but I cannot conscientiously favor the appointment of a womanto be postmaster of Wayneboro.”

“That means that he prefers the appointment should go to his nephew,”thought Herbert.

“If my mother were not competent to discharge the duties,” he said, hisface showing his disappointment in spite of himself, “I would not askyour influence, notwithstanding you were a schoolmate of father's, andhe lost his arm while acting as your substitute.”

“I have already said that I wish your mother well,” said the squire,coloring, “and in any other way I am ready to help her and you. Indeed,I may be able to secure you a situation.”

“Mr. Graham needs a boy in his store, and I think he will take you on myrecommendation.”

“The Tripp boy is unsatisfactory, so Mr. Graham tells me.”

Herbert knew something of what it would be to be employed by Mr. Graham.Tom Tripp worked early and late for a dollar and a half per week,without board, for a hard and suspicious taskmaster, who was continuallyfinding fault with him. But for sheer necessity, he would have leftMr. Graham's store long ago. He had confided the unpleasantness ofhis position to Herbert more than once, and enlisted his sympathy andindignation. Herbert felt that he would not like to work for Mr. Grahamat any price, more especially as it seemed likely that the storekeeperwas likely to deprive his mother of her office and income.

“I should not like to work for Mr. Graham, sir,” he said.

“It appears to me that you are very particular, young man,” said SquireWalsingham.

“I would be willing to work for you, sir, but not for him.”

“Ahem!” said the squire, somewhat mollified, “I will think of yourcase.”

Herbert left the house, feeling that his mother's removal was only amatter of time.