Home/ My Brother Is My Mate Completed 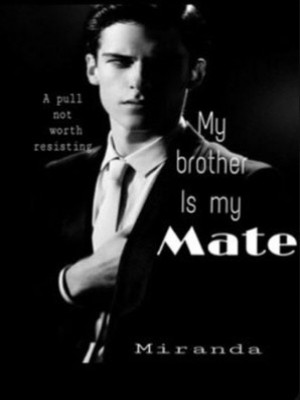 My Brother Is My Mate

"This doesn't make sense." I whispered, my hand on the door knob. "We can't tell mom and dad." He whispered back into the darkness. "You can't be my mate!?" I hissed back "your my brother." "I'm not going to resist the Sparks April," He growled, but continued "or the pull, and feeling of want... Do you hear me?" He growled. "W-what?" "I want you so bad it hurts" he whispered. It was like my lips moved and spoke for me. "Then take me." His warm lips smashed onto mine finding them in the dark. Sparks lit the tiny closet up, and suddenly I knew where he was almost as if we were in a room full of light. I could see every move he made, and I wanted him to make a move on me. I kissed him back with force, and longing. My first kiss is with my brother. My mate.

About
Table of Contents
Comments (32)

"I just can't do it!" I sighed shaking my head.

"Can't do what?" Callie smirks at me.

"How the freak do you beat me at this game every flipping time we play it?" I scrunched my nose up.

"But I was just about to beat you!" I threw my card on the ground.

"Careful chick! I will smack you so hard not even google can find you" I pointed a finger towards her direction.

"What can't google find?" My brother Asher walked into the room.

"Callie," I hiss "because she won't let me beat her." I pointed at Callie again.

Callie held her hands up like I was going to shoot her.

"Wow" Asher laughed sitting down on the floor with us.

"Do you want to play with us?" Callie fluttered her eyelashes. I almost threw up. Honestly, yes my brother is... Hot. His dark messy brown hair that was always tossed, and his grey and blue eyes that trapped you, completed his muscles and creamy tan... EW.

I can't believe I just thought that way about my own brother. LORD KILL ME NOW!

I shuck my head and smiled at my brother. My ugly

"So how's your day been going Pre- Birthday boy?" I asked stretching my arms a bit.

"Good, though I just wish I would hurry up and shift."

"Why? Isn't it like... painful?"I asked raising my eyebrow.

"Yes, but I will find my mate." he smiled at me. Damn his perfect straight white teeth!

"When will you shift?" I asked changing the subject... saving my friend from any further Embarrassment.

"Any minute I could go all Wolf" he fake growled. I just rolled my eyes and stuck my tongue out at him.

"Do you want to play with us?" I asked stacking the cards back up for the next round of candy land.

We played 3 rounds of candy land... I lost all. ALL. How does this even happen? Why can't I win just one? I only ask to win one game! And guess who won all? Yep you named it... Callie...

We were on our fourth round. Asher was about to beat Callie. I of course was sent back like 20 spaces! I was loosing AGAIN. So personally I was voting for Asher.

"Come one Asher! You can beat her!" I cheered.

I glanced at Asher beads of sweat coiled on his forehead. It's probably nothing.

"Come on!" He pulled a card and had to move back two spaces, letting Callie catch up to him.

A sudden growl ripped through his chest, and no, not the fake one.

"Asher, are you ok?" I asked him backing away from him.

His eyes met mine, and for a second I felt true terror. His eyes were no longer blue and grey, but a dark dark Grey, almost black.

"MOM, DAD!" I scream tears threatened to spill over the rim of my eyes.

A loud scream suddenly cut through the air. I couldn't tell if it was mine until I opened my eyes. Callie shot up jumping beside me.

The tears pricked at my eyes as I watched my brother. His hands shot up to his hair he began to grunt and moan. He clutched his sides then jerked back screaming again.

The door bursted open and my mom and dad scurried over to Asher, soothing him, Or at least attempting.

Asher's eyes shot open. I watched in horror as they went from blue to a dark grey. Then the room went silent the only thing we could hear was the sudden SNAP of Asher's spine. "He's ready to shift" my dad yelled attempting to pick Asher up.

" No shit John, how ever would you think that?" My mom hissed.

Suddenly Asher jerked back again screaming at the top of his lungs.

"What!?" I screamed at my parents who was now scrambling, and grabbing Asher's arms and legs, grunting as they picked him up. Also ignoring my question completely.

"Call the alpha" my dad grunted carrying my struggling brother.

"On it" Callie scrambled out the door.

Asher thrashed and growled snapping at dads arms and attempting to claw dad in any place possible.

I glanced over at my parents who were frozen in place. we all looked at Asher his eyes were a dark grey, and they were locked on me.

"April?" He asked tilting his head a little. He cracked a smile his new sharp canines piercing his bottom lip. "Why are you crying?"

I was just about to respond with a 'your trying to kill our parents, and you look like your dying dumb ass' but just like that he snapped out of this peaceful silence his back arched and he let out once again another pained scream.

I stud stunned and shocked as I watched my older brother being carried away.

A pain hit me somewhere deep inside of my chest.

This was different. It wasn't a "My poor Brother." Pain it was a "He left me" pain. and it tore my insides up.