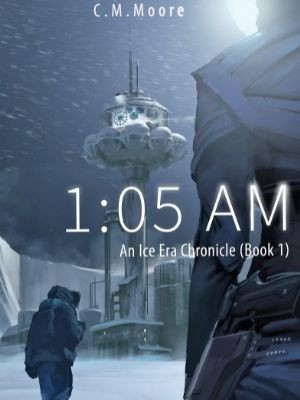 An Ice Era Chronicle Book One

Yearning for a normal life, assassin Karmen-Marie has had enough— enough of surviving contracted hits and enough of the post-apocalyptic world. Forced to take one last job, Karma sets out across the frozen landscape of Earth. Rea MacBain's job is to ensure the safety of Earth's precious few water purification plants. He believes his abusive past must stay buried under the snow that encases his domain. A single bullet will send Karma and Rea in a direction they'd never expected. Ice-cold assassin's blood drives the woman sent to kill him, yet it ignites the fire which thaws Rea's heart.

Blood splattered on his ice-coated pack of playing cards.

Freeing the ace of hearts, Keith glared at his blindfolded captive while he wiped off the card. When the deck was clean, he set the pack between the neat row of different-sized knives and his old clock receiver. The time blinked at him: 1:05 a.m. He leaned his hip against the stainless-steel table as he eyed the man tied to the chair in the middle of the stark room.

The prisoner flexed in his seat in fear and pain. Sweat trickled down the side of his face. Keith considered the blindfold. The eyes never lied. He might remove the cloth once they got started again. Not really interested in torture today, he flipped on his radio.

While listening to the only radio station available, he picked up his favorite knife, the one with the jagged hook on the end.

"Welcome to CNN-Fox News United, Full Spectrum. This is Ethan Robinson, and this is your Eye on Ice. It is currently five minutes past one," the radio announcer began in a monotone voice. "The United Nations announced today all government officials would like to celebrate Ice Year One or I.Y.1."

"What a…" Keith paused. "What is the word… stupider?" Keith muttered to the gagged prisoner.

He didn't expect an answer. His hostage choked on the cloth shoved into his mouth. Keith reached for a whetstone and focused on sharpening his knife to a razor-fine edge.

"Scientists have announced the beginning of a new era. They are urging all citizens who have not found safe underground homes to continue to move south. The weather along the Equator continues to be a stable fifty degrees. In other news today, the Canadian Prime Minister announced this day to be a holiday for all former United States citizens. Our new leader has high hopes for smoothly joining the U.S.A., Canada, and Mexico during these hardships. After much political debate, the United Nations has agreed on naming our new joint government The Confederate Territories of North America or C.T.O.N.A. Spirits remain high as a celebration of the holiday begins with…"

Keith got up. He switched off the radio in a huff. While shaking his head in disgust, he returned to circling the large man tied to the chair. The failed assassin flexed his muscles, testing the strength of the rope. Keith huffed at the stranger much as he'd done at the radio. The announcement of a new holiday annoyed him. He had too much work to do today to let any of his men off to celebrate this joke of an event. There were no celebrations anymore as far as he was concerned. People should just start accepting that. They should be concerned with food and basic survival. Not drinking, clinking glasses, and saying, "Thank God, I didn't freeze to death when that meteor hit."

Irritated, he sank his knife into the arm of his struggling victim. The blade sliced cleanly through the skin. To his credit, the prisoner didn't make a sound.

Keith pulled the knife out roughly and smiled. This man hadn't made a sound yet. By the time he finished here, Keith would know everything he wanted to know. That's how it always went.

The white metal door from the hall was thrown open and squealed on its hinges. The worn knob clattered against the wall with a loud bang. As his eyes grew wide at the interruption, Keith spun around to see who would dare bother him. Fletcher, the young man he planned to train as his second in command, stepped past the threshold.

"Kazimir, I need to speak to you. It's urgent."

Furious, Keith shot Fletcher a look that caused the boy to wince as if he'd yelled. All of Fletcher's tall, sinewy frame flowed with catlike grace into the room. His dark brown skin, hair, and eyes looked like a shadow against the stark walls. When Fletcher saw the stony expression on Keith's face, he took a step back.

When Keith threw the bloody knife, it sailed toward the table. His face reflexed a menacing scowl at the unwanted intrusion.

"I told you not to call me that." He pinned his second with a look sharper than any knife he owned. He spoke with a perfect American accent. "We changed our names to fit in. It's Keith Davis. If you call me Kazimir Denisov again, I'll cut you up in pieces. I did not have to save you when we met at that mass of confusion on the Equator. You would do well to remember that."

Keith went over to the table and shoved the radio back into the corner. He looked for the knife he'd thrown. When he couldn't find his blade, his fingers grasped his machete instead.

"I’m sorry, Keith. I’ll remember in the future. Keith Davis.” Fletcher repeated the name a second time, but an uncomfortable silence won out and settled between the two men.

Keith scratched his beard as he regarded his would-be second. The boy looked and acted nothing like him. Maybe he was wasting his time trying to mold him into someone useful.

He took a deep breath and decided to let the boy be for now. Even though Fletcher was in his early twenties, until the kid started behaving like an adult, Keith would consider him a child. He wouldn’t explain again why they had to have new names since leaving the pandemonium on the Equator. If Fletcher still didn’t understand that they would lose everything they’d built because they weren’t American, Canadian, or Mexican, then the boy would never get it. Russia didn’t have the building resources the old U.S. did, and he refused to go back there to start all over.

Keith waited for Fletcher to tell him what was so urgent, but the boy’s eyes were riveted on the blood pooling on the floor. He also waited to see if Feliks would remember he was supposed to go by Fletcher now. Feliks was close enough to Fletcher, so he couldn’t understand why the kid couldn’t remember it.

“Fletcher!” he snapped out when his patience ran thin. “What the hell do you want?”