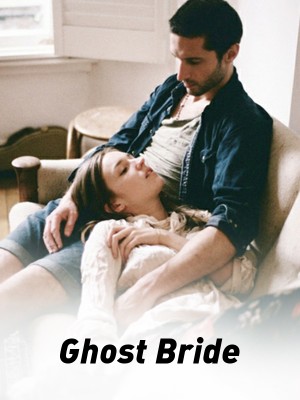 Ghost Bride is about a girl, who lost her parents to a car accident, two days to her birthday She seek help from her cousin Sofia, since the world thinks the whole family died in the car accident She then discovers that a man named Felix Renee is responsible for her parents death to get revenge she needs to hide her identity. They is when she finds out about a guy who has the same goal as her that goes by the name Nathaniel del Vera Nathaniel del Vera is a cold , proud and handsome man, but he decides to help poor Alexa on one condition What is this condition? Will Alexa be able to comply with it? What happens if she does? Why is it titled ghost bride? Let find out together

Alexa just got back from work,she was so tired,she saw her mom talking to someone strangers,she wondered who they her but her family loves doing business so they must be some investors,she ignored them and went to her room.

She freshen up and went downstairs, her mom was now alone sitting on the big cushion in there large sitting room.

"Welcome dear" Mrs Robert said "when did you get back?"

"Earlier, you were busy " she said taking a seat beside her mother who is busy reviewing some documents"What are you doing?"

"It going to be your birthday next tomorrow, so we are going on vacation, so I'm getting the tickets ready"she said

Alexa nodded and head back to her room to get her things ready and she also made a call to her office that she would be absent.

Alexa Robert is the only child of her parents but she's not a spoilt brat, she knows how to take care of herself and also her family.

A maid walk into Alexa room and inform her that dinner is ready, Alexa got up from her king size bed and follow the girl outside.

"We got the contract" Mr Robert said and his wife hug him with joy, they were both happy until Mrs Robert asked "do you think Felix will be okay with this?"

"Don't you know the saying of may the best man win, we got the contract because we are capable of doing the job and Felix isn't"he replied her and she nodded

" What the good news? "Alexa ask making them flinch

" Really congrats Dad"Alexa said hugging him, they did a group hug

"Alright why don't we have dinner now, so we can sleep early we have a flight tomorrow"Mrs Robert said pulling from the hug and they all walked to the dinner arena

"Mom what time is the flight tomorrow?" Alexa asked taking a seat

"Around eight am,we are leaving that early so we can get some things done, especially the arrangements for your birthday"she replied

" I hope you remember that I don't want a big celebration, just dinner with some friends is enough"Alexa said and his father laughed

" Why are you laughing?"Alexa asked with her hands across her chest and her father laughed more

"Just dinner with some friends is enough" he mimick her "Alexa until when will you stop acting like a little girl,it time to live like the heiress you are, look I work for you and your mother no one else,So no one is going to scold you for spending your father money,stop having a simple dinner every year"

" I'm just being considerate dad,I know am a heiress but I need to think and spend wisely"she said

" That very good of you but you are starting to take it to far,so just enjoy your father's money,no simple dinner but a glamorous party"her father said

" Alright, whatever makes you guys happy"she said with a light smile showing her gap teeth, after dinner they all went to sleep

The following day the house was busy, because they were traveling,the maids were moving up and down in there maids uniform, some were cleaning the house, some were taking the luggage to the car.

"Are we running away?" Alexa asked her mom who was busy on the phone talking to someone about their accommodation

mom is always extra careful,she loves making everything look perfect, sometimes I wish we weren't rich not because it isn't good,but people tends to treat me differently, and mom loves making it obvious

We had a quick breakfast and drove to the airport, there was a huge traffic,mom was restless she is worried about us missing our flight

"Alexa I'm thirsty,can you get me a bottle of water?"she asked

" You didn't have enough water at home?"dad asked with a angry tone

" I didn't want to be the reason we will miss our flight" she replied him and I smile,they always act like newlywed couple,if you Don't know them you'd think they are fighting but that's their way of being romantic

"I'll be back" I said and alight from the car,I made my way to the nearest shop by the road side

"Can i have two bottles of water?" I asked and a lady handed them over,I was about to give her money when I heard a loud explosion.

I turned around only to see my car, our car floating in the air and it landed on the ground with a great force

It was burning,I tried to move closer but the heat was way too much,"mom Dad!!!" I yell but the car wouldn't stop burning it felt like my world was burning,of course it my world,my parents are burning and I can't do anything to help, people were running up and down

I felt helpless on the floor, crying with no one to console me,I heard a guy in a hoodie saying over the phone "the job is done boss,all his family are dead not even a fly can survive the explosion"

What does he mean? Our car was intentionally set on fire? Or was it a bomb? I kept thinking when he said again "the contract is now yours"

I'm not safe,if they finds out I'm alive they are definitely going to come after me,I need to leave but where do I go,I ran down the street with no destination in mind with tears in my eyes,I kept on running none stop the only thing on my mind was to survive

Felix Renee sat on the wooden chair in his garden,it was under a mango tree he was slipping his red wine.

He is happy about the good news his man just gave him,he and the Roberts were competing for the same contact,but they got it and this made him furious.

He ordered his men to set a bomb in their car,it would be better if the whole family is dead,the contract will now be his and if anyone dears to stand in his way they would suffer the same fate

He kept on smiling as he slip the wine in his mouth,he just need to go to the company tommorow and sign some papers,the contract is now he's