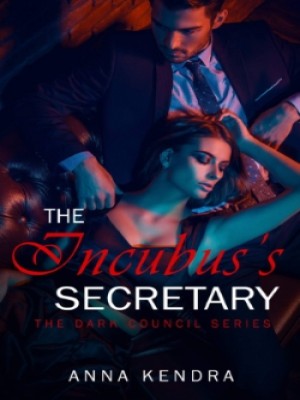 When Sanaya Johnson joined ReefWood Inc. as the CEO, Lancelin Eustein’s Personal Secretary, little did she know that her life was about to change forever. As a Scribt, a human with knowledge of the immortal world, she had to constantly balance her two worlds while keeping the immortal world a secret from her near and dear ones. But trouble arises when Lancelin himself takes an interest in Sanaya, a liking that threatens to shatter her hold on reality. Lancelin has lived for centuries amongst humans but no one has ever tempted him as his little Secretary does without even trying. He is determined to win her over at any cost, just to get a taste of the forbidden fruit. But Sanaya has had her heart broken once and she finds it near impossible to trust another man, especially an Incubus who is to be the future Incubus King. But just when the two of them start to fall for each other, the past comes to haunt them in the most unexpected of ways. And with Lancelin’s coronation on the way, will he be able to keep Sanaya by his side when the entire world wants to tear them apart?

Ancients- Five of the most powerful mages in the world who had created the dimensions. They were Tuhin, Alexander, Pallatos, Verna and Shinou.

Chrone- Leader of a Mage coven.

Coven- A group of mages living together, usually consists of thirteen families.

Dark Council- A council consisting of all the Kings and Queens of the eleven dimensions. It holds the peace between dimensions and solves inter-dimensional conflicts.

Dimensions- Parallel worlds/universes. There are eleven and half dimensions in total.

Incubus- Demons that feed on life energy of humans through sex.

Mages- Immortals who can draw power from the earth’s resources and cast spells.

Portals- Magical doorways between dimensions. Can occur naturally or be created by mages.

Sanctium- A peaceful dimension where all the kings and queens of the Dark council reside. Neutral territory.

Shadowland- An unfinished dimension. No one knows what’s inside or if any creatures live there.

I watched the sun set over the Hudson, the skyline turn from a bright molten gold to a dark indigo as the stars lit up one by one, like fireflies coming to life.

New York City has always intrigued the supernatural. Not only was it filled with overflowing life energy, but the sheer hustle and bustle of the daily life of the commoners left little time for people to speculate. Which was a huge advantage for the supernatural creatures.

No one cared when someone staggered home at five in the morning. No one asked questions when a teenager, barely an adult, got into a fancy car with a stranger, wearing next to nothing and yet still succeeding in sparkling brighter than the sun. And most importantly, there was unlimited supply of fresh feeds. People were drawn to New York like moths drawn to a flame.

The velvety politeness of the voice turned my attention to the dark haired woman standing behind my desk. She was wearing a white full sleeve shirt with a baby pink pencil skirt, exposing some long, slender legs that stretched for miles. As usual, her hair was in a tight bun on top of her head with not a single strand out of place even though it was seven in the evening. Her golden olive complexion was illuminated under the artificial light glowing on my desk and her lips were devil red, enough to tempt monks into sin.

But as long as I’ve known Sanaya Johnson, she’d never shown interest in me or any of my friends or family members who had visited my company. Maybe because she was immune to our supernatural charm or maybe because she knew exactly what we were and how dangerous it was for her to mix with us. Or maybe she was playing hard to get in the most intriguing manner I’d seen anyone play. Who knows? This woman was full of mysteries that dared men to try and solve them. But as far as I’ve known, Sanaya Johnson had been happily single for the last five years that she’d been working for BlueStar.

“Yes?” I answered when I saw she had her planner in her hands.

“Your dinner reservation is in an hour at your favorite restaurant, and you are to pick your date up in about thirty five minutes. The wine and dinner menu has already been ordered as per your and Ms. James’s taste.” Sanaya used a slender finger to lift up her reading glasses as she continued to narrate the list. “I’ve taken care of any last-minute changes to you schedule, and the penthouse suite has been book at The PinkStone Villa for the weekend. I’ve also informed your housekeeping staff to pack your luggage accordingly. Everything is ready and waiting in your car.”

“Thank you, Sanaya.” I smiled politely at the woman that I had come to admire for the course of the last five years. “It’s truly been a pleasure having you here.”

“I should be the one thanking you, Sir, for trusting me despite my shortcomings.” Sanaya bowed her head slightly out of respect.

Shortcomings? I didn’t think she had any, but I didn’t refute her. Sanaya was one of the few people who knew our secret and worked accordingly to make our life easier. Over the years, I’ve had several secretaries, but none as efficient as Sanaya. It would be tough to watch her go as her term with our company would end next week. But Sanaya has been ordered to transfer to my brother’s company and that was one decision that I was completely okay with.

“Have you read the files regarding my brother?” I asked her as I grab my jacket from the back of my chair, and Sanaya immediately came over to help me put it on.

“Yes. I’ve been very thorough about all the details provided.” Sanaya said as she stepped back. “But I’m guessing there’s a lot more to Mr. Eustein than what the file provided.”

“Remember to observe and study him in person. Lance is known to be quite difficult when he wants to be.” I warned her, remembering the long list of Secretaries that he had fired in the last three months alone.

“Oh, don’t worry, Sir. I’ll be on the lookout for anything and everything.”

That, I had no doubt about. Sanaya was always very observant and was prone to notice the tiniest of details that even I had failed to notice. It’s part of what made her so efficient and valuable.

I smiled as I gave Sanaya an early leave and headed out of my office. It will be interesting to see Lancelin the untamable and Sanaya Johnson clash heads. My brother has been in a sore mood for as long as I could remember but he’d always been very observant of Sanaya, whenever they had had a chance to come face to face, which wasn’t all that often. But now he better watch out for her, because if there was one thing I was sure of, it was the fact that Sanaya was no ordinary woman. She was meant for greater things and her journey has only just begun.