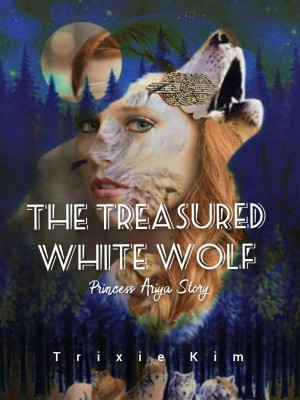 She was said to be the treasure in their kingdom, the white wolf pack. She was the queen's newly born princess. Born to save their world, she was forced to leave the extramundane life she would have when the clan of bloodsucking vamps attacked their peaceful kingdom in the middle of the night under the sight of the goddess of the wolf moon, Diana. Her protector, an ever witty brilliant half wolf half vampire sent her to the ordinary world. "She is the treasure. She must be protected!" However, covered with shining gold cloth, she was left alone in front of a wide huge iron gate of a blue blood family. "Something's sparkling in front of the gate Jon!" Halley woke her husband up in the middle of the night. "Wait! Let me check!" the still drowsy man got up wobbling as he went outside and glanced at the snow white skin baby with a long candy corn hair and bluish purple eyes. "Whose the ugly baby?" rubbing his still sleepy eyelids, the sixth year old Vince asked his parents. "Don't you call her ugly. From now on she is going to be your baby sister. Her name is Arianna!" his mother gently answered as she stroked his head.

About
Table of Contents
Comments (23)

Covered with dazzling glittering gold silk cloth and a small tiara with a carved diamond wolf face in the middle of the crown rims on her cute round head, the only princess from the packs of rare white wolves was born.

King Silas had never been happier watching her bluish purple eyed daughter while she was being cuddled by her ever attractive candy corn hair mother, Queen Ayana.

"She looks exactly like you!" King Silas dotingly whispered as he caressed her little snow white cheek.

"She got your eyes, dear!" his loving wife whispered back.

They were in their room surrounded with pure shining gold curtains and walls with wild vines of flowers. Their ceiling were coated with the shades of white wolf history from the beginning to its present. In the middle of the grand plafond was a traditional crystal chandelier shining brightly under the moonlight.

The king sized bed where the mother and the daughter were currently lying was covered with an immaculate shining pure white silk mattress and a shimmering gold blanket.

"Your majesty, the pack is ready to welcome the princess!" Rubio, King Silas second hand and only nephew announced as he bowed his head before them.

He was also a bluish eyed white wolf and his father was the late prince who had been killed by the vampires a thousand years ago. He was King Silas younger brother.

"Thank you, Rubio! Let's go for the ceremony then!" King Silas smiled at his nephew as he guided his dear wife and his daughter to the grand hall.

The grand hall was filled with white wolves of different classes. Their shades of outfit determined their clans and their positions in the pack.

Gasphar, the head of the white wolf in the south lifted his head with pride when he saw the royal family. He was wearing a purple silk vest and black silk pants with dark green scarf surrounded his waist and tied at its right side.

He was also one of the kings subjects and his power was his laser beam like eyes and his strength.

Few rows away from him was Anton, the leader of the white wolf in the north. He had clashed most of the time with Gasphar but they always kept their civil affair light for the sake of the pack.

He was wearing their trademark. A black low neckline fitted long sleeves and bell-bottoms trousers with wide strap and buckle. If Gasphar's power was his eyes and his strength, Anton was his speed and sharp claws that had the ability to grow long during fights.

The heads of the east and west packs and their clans were between the clans of Gasphar and Anton. The leader of the east was a middle aged woman. Her name was Vashti, a real and furious warrior who had gone to several battles during her youth. She was fast, strong, and really one of the king's brain in the kingdom.

Vashti liked to wear a warrior outfit wherever she went. For her, the outfit symbolized female strength, competence, love, and friendship. Since her clan was all women, they wore the same thing.

A brown leather dress with short skirt, a dark brown breastplate that covered their rich bosoms and connected to a strong metal armour at their backs, their hands were wrapped with light metal gaunlets and their arms with greaves.

If they were going to transform into white wolves, their warrior outfits were elastic and could be removed easily. The last clan was called to be the weakest and most of the time being bullied or being suspected as spies. For they were all half white wolves and half vampires.

Their leader was also a woman called Sira. She was a meek person but she had the power of charm. She was the siren in the kingdom. Her clan was composed of both male and female mixed bred. The females were the epitome of beauty in the pack. They were like nymphs from the greek mythology and the males were their counterpart.

As King Silas and Queen Ayana gracefully walked in the platform in front of the hall, the high priest beckoned everyone to kneel down before them.

"Tonight under the gaze of our moon goddess, Diana, we are here to welcome the princess of the kingdom and the heir of the throne. "All hail to the king!" the priest announced.

"All hail to the king!" the white wolves who remained kneeling on the cold floor repeated as their heads were looking down.

"All hail to the queen!" the priest continued as he raised his hands up and lifted his head in the air.

"All hail to the queen!" they seconded.

"All hail to Princess Ariya!"

"All hail to Princess Ariya!"

After giving their utmost respect to King Silas and his family, two robust men were summoned to bring the big goblet in front of everyone.

"All this time since our pack has started, this goblet of our fate has never failed to determine our destiny. Whether we are a friend or a foe, it is our decision to fulfill or choose that path!" the priest declared as he started the ceremony for the newly born princess.

"And now, the heir of the throne's fate must be determined tonight. Whoever will she be in our clan, we must accept her with all our hearts!" he added as he cut a strand of the quietly observing little girl's hair in her mom's arms.

When he dropped the candy corn hair in the big goblet, everyone halted and held their breaths. The color that would appear on the air was the fate of the wolf.

Then after few seconds, the clear air a while ago was turning dark. Everyone gasped and covered their mouths including the parents of the child.

"It can't be!" the high priest said while shaking his head. He was shocked with what he was witnessing.

When the high priest was about to interpret the princess' fate to the king and queen, the dark smoke turned to bluish sky.

This time the high priest fell on his knees as he gasped for air. His jaw was still dropped and his eyes went wide.

"High Priest, what's the fate of my child?" the queen couldn't help but to ask.

Everyone was shocked with his reaction. They were all waiting for his answer.

"My queen, the princess must be protected at all cost!" he anxiously answered.

"What do you mean?" the king squinted his eyes on the kneeling high priest in front of him.

"She is our only hope to preserve the white wolves pack!"

Everyone roared at his statement. Suddenly, the silent grand hall became clamorous.

"High Priest, what do you mean?" Rubio was the one who asked this time. His baritone voice distracted everyone.

"Princess Ariya is the TREASURE! SHE IS THE LIGHT!"